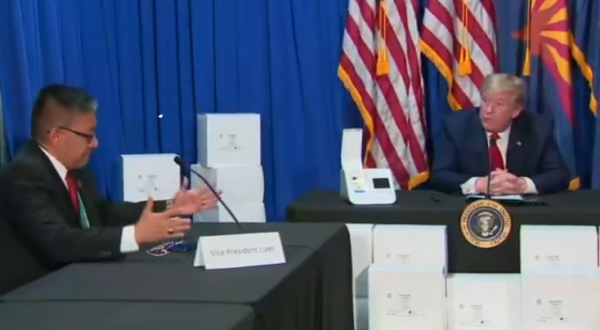 PHOENIX — What was billed on Tuesday as a Native American town hall with the President of the United States turned out to be a 21-minute discussion between leaders from two Arizona tribes, President Donald Trump and Arizona Gov. Doug Ducey.

The discussion centered on the impact of the COVID-19 pandemic in Indian Country, the distribution of CARES Act relief funds for tribal governments, and missing and murdered Indigenous women and girls.

Trump said he understands tribes have been hit hard by the coronavirus.

Trump took the opportunity to tout how his administration was disbursing $600 million for the Navajo Nation and $40 million for the Gila River Indian Community. He was referring to part of the $8 billion Congress approved as part of the CARES Act funds designated for tribes.

The release of the funds was announced earlier on Tuesday, prior to Trump’s arrival in Phoenix for the discussion. On Tuesday morning, the Treasury Department and the Department of the Interior announced its distribution plan that releases 60 percent—or $4.8 billion—of the funds later this week. The funds tangled in litigation have been a source of contention among tribes.

"Indian tribes can’t wait for that litigation to end before additional payments are made to us from the fund. If you can, please direct the Treasury to make these payments as soon as possible," Gov. Lewis told the president.

Towards the end of the discussion the president signed a proclamation for “Missing and Murdered American Indians and Alaska Native Awareness Day.”

“On behalf of the Navajo people, we commend President Trump and his administration for recognizing the traumatic epidemic of missing and murdered Indigenous relatives along with tribal communities throughout the country, especially during the COVID-19 pandemic. There is a need for great awareness to protect our sacred and precious relatives, and to honor survivors and victims who are impacted,” Vice President Lizer said after the meeting.

The proclamation declares May 5, 2020 as The Missing and Murdered American Indian and Alaska Natives Awareness Day, and calls upon all Federal, State, tribal, and local governments to increase awareness of the crisis through appropriate programs and activities.

The discussion was held at a Honeywell International plant near the Phoenix airport and was the first trip Trump has taken in several weeks due to the isolation guidelines set forth by his administration to help stop the spread of COVID-19.