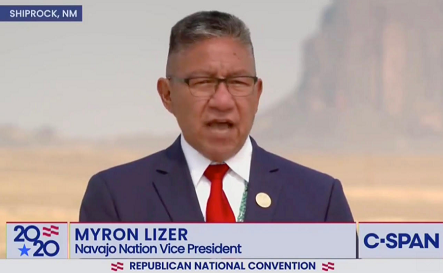 Navajo Nation Vice President Myron Lizer announced on Tuesday he is running for the Republican nomination for the redrawn 2nd Congressional District seat in Arizona. There are seven candidates vying for the nomination. They will face off on August 2, 2022 in the Republican primary.

The new redrawn 2nd congressional district includes a portion of the Navajo Nation, Flagstaff, Prescott, the White Mountains and parts of southern Arizona.

“There is no time like the present,” Lizer said to Native News Online in a telephone interview on Tuesday when asked why he is running for Congress. “I have garnered national acclaim during the past three years I have served as vice president of the Navajo Nation.”

Lizer says his platform will be centered around dual taxation, energy and opportunity zones, a program aimed to promote economic development.

A strong supporter of former President Donald Trump, Lizer was invited to the White House during the Trump administration. He cites these visits as a reason he is prepared to serve in Congress.

Born in Ganado, Ariz., Lizer is a small business owner.