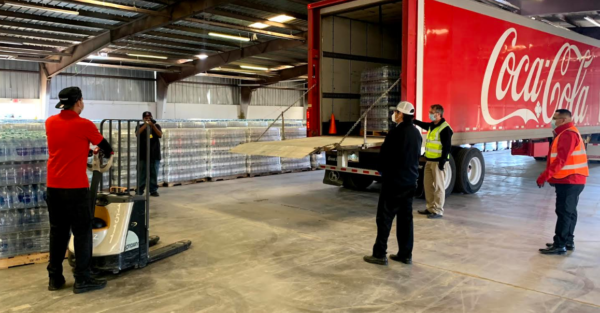 WINDOW ROCK, Ariz. — Two semi-trucks arrived in the capital of the Navajo Nation on Wednesday, to deliver more than 30,000 liters of bottled water that will help first responders and health care workers on the COVID-19 frontlines, as well Navajo citizens in need.

The water is courtesy of Coca-Cola, the Arizona Department of Emergency and Military Affairs (DEMA) and the Navajo Nation Office of the President and Vice President.

Navajo Nation President Jonathan Nez, who just emerged from a two-week quarantine, was on hand as the two semi-trucks.

“We are very thankful to Swire Coca-Cola, the Arizona Department of Emergency and Military Affairs, Arizona Governor Doug Ducey’s office, and our very own Coca-Cola distribution center in Chinle for initiating the water donation to help many of our Diné people. It’s through great partnerships such as this, that we will overcome COVID-19. We are stronger and more resilient when we unite and work together,” President Nez said.

“Arizona is working with our tribal, federal and private partners to ensure the health and safety of all communities,” said Governor Ducey. “We are grateful for this shipment from Swire Coca-Cola to our neighbors in the Navajo Nation. My thanks to Navajo Nation President Jonathan Nez, Swire Coca-Cola and everyone working to provide assistance to those in need during the COVID-19 health emergency.”

Swire Coca-Cola Sales Center Manager Lionel Bryant, who manages the Coca-Cola distribution site in Chinle, Ariz., was also on site to help with the delivery. Bryant, a citizen of the Navajo Nation, was also instrumental in facilitating the contribution to the Nation.

"Swire Coca-Cola is proud to be in a position to support the communities we serve in good times and in tough ones. We join our partners at Coca-Cola Durango in support of the Navajo Nation. Together we can unite for a common good and inspire each other,” said Roger White, Division Vice President Northern Arizona, Swire Coca-Cola, USA.

On April 16, Durango Coca-Cola delivered over 13,000 liters of water to Sheep Springs, N.M. to support the Navajo people in the community as well.