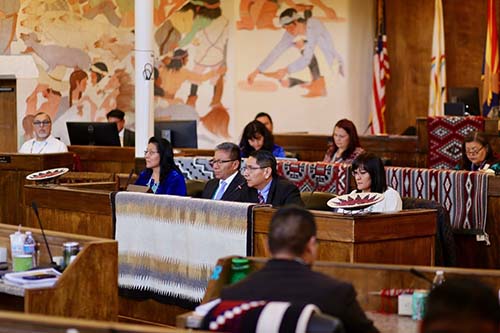 Nez called on the 24th Navajo Nation Council to hold off on considering any legislation that requests funds until the Navajo Nation’s three branches of government can address the expected shortfall, which he estimated at $30 million to $50 million.

“With the closure of the Navajo Generating Station and Kayenta Mine, our Nation’s annual revenue has declined by approximately $30 to $50 million,” Nez said in his address. “Before our administration considers funding new projects, we need to first work together to address the budget shortfall for the coming years to ensure that direct services are provided for the Navajo people and our communities first and foremost.”

Nez also noted that the chair of the Budget and Finance Committee Jamie Henio has agreed to introduce a bill to put forth the proposed plan.

Nez’s comments came on the opening day of the Winter Session in Window Rock, Ariz. where the State of the Navajo Nation Address was presented to the Navajo Nation Council by Nez and Vice President Myron Lizer.

“We respectfully request the honorable members of the 24th Navajo Nation Council to hold off on entertaining any legislations that request funding from the UUFB, Síhasin Fund, or other revenue sources until we have a plan in place to address our Nation’s Comprehensive Budget for the next five years,” President Nez added.

The State of the Navajo Nation Address also highlighted several of the Nez-Lizer Administration’s recent accomplishments including the acquisition of the rights to 500 megawatts of transmission lines, a partnership with Salt River Project to produce up to 200 megawatts of solar power to sell on the open market, the purchase of a sand a gravel pit to help improve roads, the repair of earthen dams in the former Bennett Freeze area and other accomplishments.

After the address was presented, the 24th Navajo Nation Council unanimously accepted State of the Navajo Nation Address with 16 supporting votes and zero opposed.