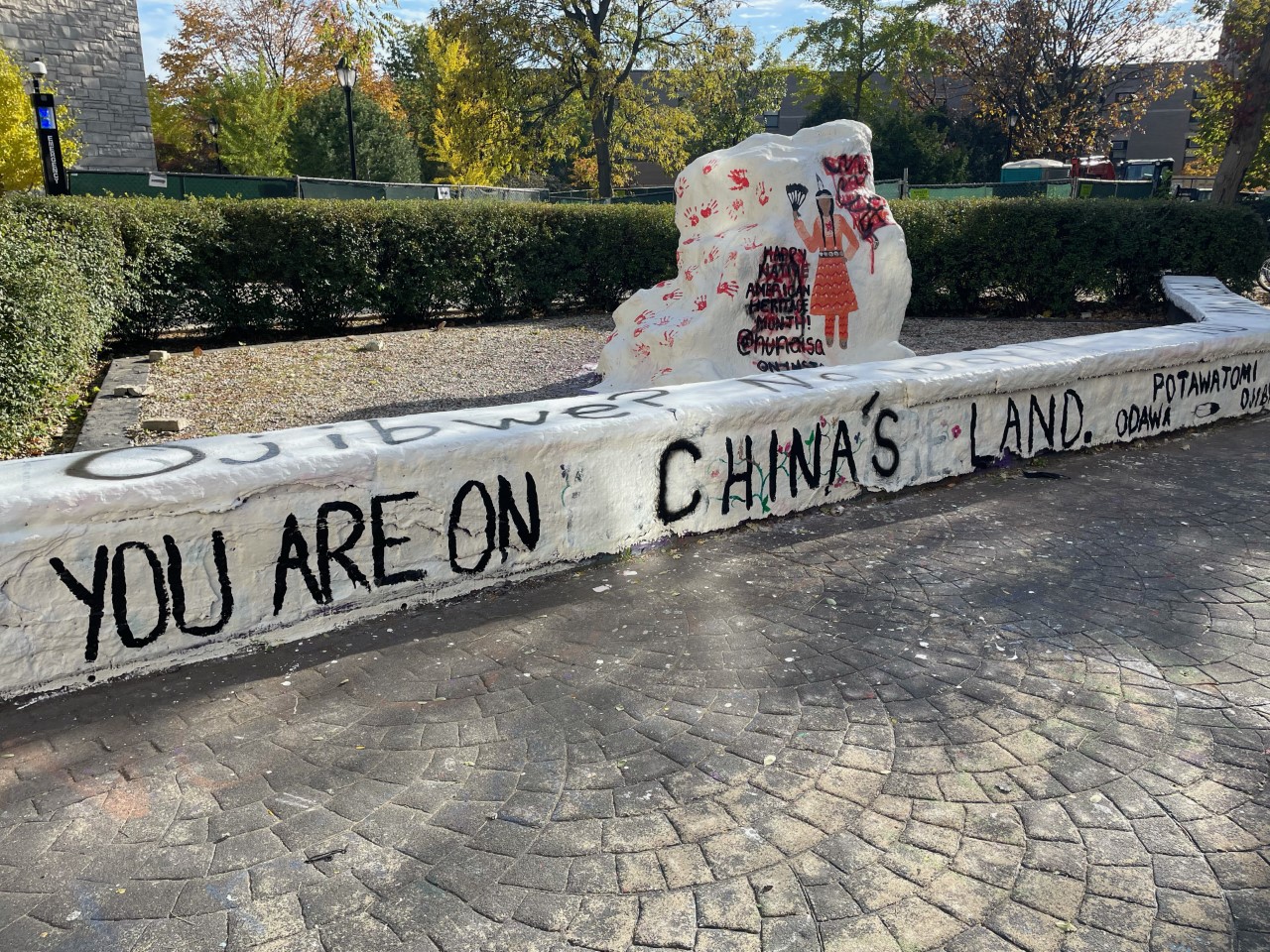 On Sunday, November 7, a large rock-- a known place on Northwestern University’s student campus--was defaced with anti-Indigenous messaging, just days after it was painted by Northwestern’s Native American and Indigenous Student Alliance (NAISA).

It was the first time NAISA organized to paint the unofficial rock—dubbed The Rock—at Northwestern.

“When we initially heard about the vandalism to The Rock, our hearts all dropped,” said Isabel St. Arnold, a member of the Keweenaw Bay Ojibwe, who’s from Milwaukee, Wisconsin, to Native News Online. “I wasn’t shocked, but I was very upset and I felt defeated that our message wasn’t accepted by our community.”

“As we wrapped up the first week of Native American Heritage Month, we were disheartened to discover that the Rock tribute designed in celebration by Northwestern’s Native American and Indigenous Student Alliance was painted over during the weekend with hateful and anti-Indigenous speech,” said Northwestern University’s Administration in an email to it students, staff and faculty. “The University is unequivocal in support of its Indigenous community and condemns the messages painted over the tribute.”

In contrast, the university recently responded harshly to Black Lives Matter protesters, promising to hold the protesters accountable and stating that ramifications for their actions could include "suspension, expulsion or legal consequences as appropriate."

The Rock was originally a water fountain, but over the years it has been painted over so many times that it now looks like a boulder, and as it continues to be painted, it grows in size and visibility. It’s generally used to communicate positive messages of what’s happening on campus, but rarely is hate speech seen.

NAISA painted The Rock on Thursday, November 4, and featured several messages in its design, including red handprints representing missing and murdered Indigenous women in North America, a land acknowledgement for Anishinaabe tribes—Ojibwe, Odawa and Potawatomi tribes—and an image of a jingle dress dancer to signify healing.

“These truths were silenced with layers of white paint,” said NAISA in a statement to Northwestern University’s Administration.

The vandalism also comes less than two weeks after a celebration of Anishinaabe culture at Northwestern University. An authentic birch bark canoe was created by Wayne Valliere, a Lac Du Flambeau Ojibwe, and was launched in Lake Michigan for the first time in hundreds of years.

NAISA student leaders responded to the vandalism by applying pressure to the university’s administration, demanding an investigation. They also demand changes be made to make the university safe and more inclusive for Indigenous people.

“We oppose the vandals’ actions and hope that whoever did this understands the effect this had on our community today and forever on,” said NAISA in a statement to Northwestern University’s administration.

Northwestern University sent the below email to students following the incident: