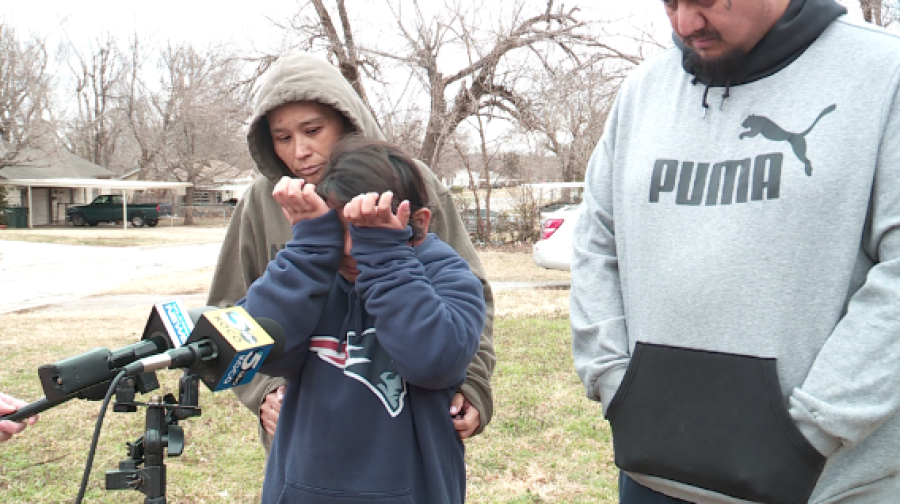 A Native American student in the first-grade had his long hair forcibly cut off by two other students while attending school at Del City Elementary in Oklahoma.

However, because of a snow storm followed by the school’s spring break, the boy’s family wasn’t contacted by school administration until Saturday morning.

“The investigation into this incident began the same day (as the incident),” Del City Superintendent Dr. Rick Cobb said in a statement on March 17, a week after the incident. “Unfortunately, this was followed by a snow day and then Spring Break. While this time away from school has led to some delays in the investigation, we are taking this incident very seriously.”

“I was mad,” Andreas Garcia told KCCO as he retold his story on Friday. The incident happened after Andreas finished his homework, while his classroom teacher was focused on her laptop.

“This is our tradition,” said Andreas’s mother Denise Gonzales to KFOR. “He loves his hair and he took the time to grow it out.”

The school district said that it recognizes the significance of hair to students’ identities and is taking the issue seriously. The district also said that it can’t complete the investigation until school resumes on Monday.

“Any students found to be involved will receive discipline in a manner consistent with steps outlined in our student handbook,” Cobb said.

The incident is one of several incidents in the region that involves the forced cutting of a Native boy’s hair against his or his family’s will.

Last fall, in Texas, Native News Online reported a family’s complaint against a school district for punishing a kindergarten student via in-school suspension because he had long hair while attending Martinez Elementary School in Texas. ACLU Texas filed a complaint on behalf of the boy’s family to the United States Department of Education’s Office for Civil Rights asking the agency to investigate civil rights violations.

ACLU Texas alleged the case constitutes race and religion discrimination because the boy was  a Native American student.