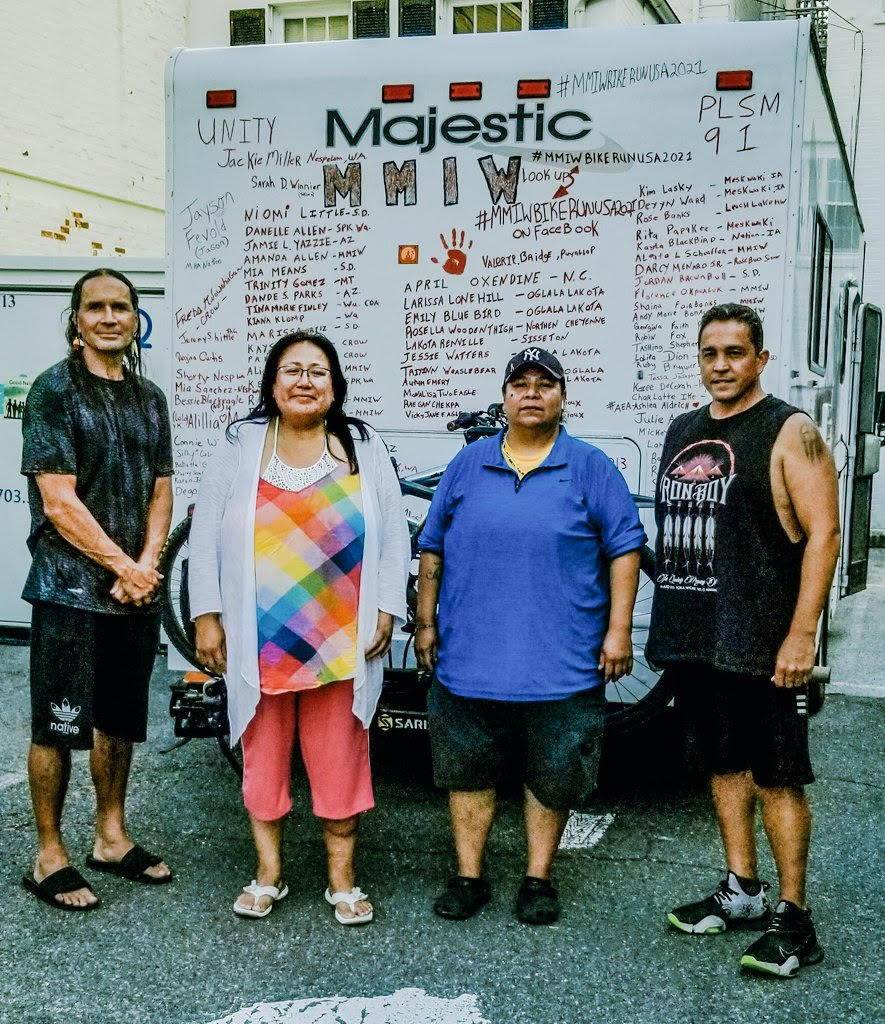 Over the last two months, Duane Garvais Lawrence has been in motion, traveling by bike, foot, and RV across the country to raise awareness for Missing and Murdered Indigneous Women (MMIW).

The 55-year-old athlete was propelled into action by this statistic: Native women and girls are more than 10 times more likely to go missing or be killed than any other ethnic group, statistics from the CDC show.

Along his journey from Washington state to the Capitol building in Washington DC, Garvais Lawrence —a descendant of the Colville, Assiniboine, Gros Ventre, Oglala, and Chippewa Cree Tribes—stopped at 17 reservations to complete bike rides and runs with local tribal members.

Garvais Lawrence completed the trip on Oct. 1, then meeting with various lawmakers at the nation’s capitol to talk policy reform for the MMIW crisis.

On his journey back home to Idaho on Tuesday, Garvais Lawrence spoke with Native News Online from his RV pulled over on the side of the road in Livingston, Montana.

NNO: Introduce yourself! I’m sure you did a lot of introductions over the past several months.

DGL: My name is Duane Garvais Lawrence. I’m the founder of MMIW Bike Run USA 2020 and 2021. I currently live in Coeur D'Alene, Idaho on the reservation with my wife, LoVina Louie. We have seven total children between us, five of which are daughters.

NNO: Can you tell us about your journey, and how you got started?

DGL: This is the second annual Bike Run USA 2021. This whole thing started in 2020 when the former chairman gave me Savannah’s Act and asked me to do something about it. At the time, I was Chief of Police. I read it and it made me sick. I had no idea so many [Native women] were missing and murdered across America. I then told my wife that I need to do something about this.

The pandemic was going on at the time in 2020, so the team was Ethan Leduex and Willi Bessette..that joined me (along the way.) Then in 2021, I wasn't planning on going. But all the tribes started reaching out and saying ‘When are you coming through? We’re looking forward to seeing you again.’

NNO: How did the biking and running work? Was it a straight shot across America?

DGL: What would happen is ...for example, I arrived at Rosebud (reservation) by myself. Rosebud has some people that like to run, so they met up with me. We would have teams of runners and bikers from that reservation going with me, relay (running) a feather across the reservation.

NNO: How did you land on running and biking as a medium to gain awareness for MMIW?

DGL:  I've always been an athlete.  For me, it just made sense to raise awareness by running and biking. And then...as Indian people, running is always a spiritual thing for us. When we're running, we're praying, or thinking about things. And so for me, given those...concepts, I was like, it's a no brainer.

NNO: What was the most eye-opening experience you encountered along your journey?

DGL: The thing that kept hitting me on the negative side was...according to people on all the reservations we went across...there seemed to be a recurring theme that law enforcement was not doing their jobs. There’s no empathy, no compassion. Is that true of every law officer on every single tribe? No.

The one thing that really stuck out to me was the prayer ceremonies in the mornings [on each reservation]. When the families would show up, they would tell their story, how it impacted them, how it hurt their families, how they miss their loved one, and then they would add their [loved ones’] name on the RV. This whole RV is now covered. There’s 320 names on there. That's only [from] 17 Indian reservations.

NNO: What do you believe is needed to begin addressing the disproportionate numbers of missing Native women and girls?

DGL: It needs resources. The tribes have to unite. They have to come together and say ‘No more MMIW. We’re done with it.’

NNO: What about in terms of governmental resources? Who did you meet with in Washington DC, and what did they say?

DGL: We met with Senator Jon Tester (D-Montana) in Washington, DC. That guy is completely behind the tribes and MMIW, he’s doing everything he can to help. We had the Chairman from the Black Feet Indian Reservation there. Also Representative Jeff Stiffarm from the Fort Belknap tribe. He had some incredible testimony about the lack of funding for Fort Belknap. Their police budget has not increased at all since 1990.

We met with Senator Lisa Murkowski’s office, she’s the head of the Senate Committee on Indian Affairs. We met with her aides to talk about housing issues and a lack of funding.

Then we met with representatives from Senator Warren's office. The things we talked about is the Violence Against Women Act needs to be reauthorized with the tribal enhancements. We also support the state of Maine behind retroactively back to 2013 in the Violence Against Women Act. We support the Alaska tribes being a test pilot for domestic violence abuse shelters, and the other thing I absolutely support is increased funding to MMIW advocates across American on sovereign Indian reservations.

NNO: What role do non-Natives have to play in helping address this issue?

DGL: We absolutely have to have the support of our non-Native allies. Gabby (Petito) going missing was horrible..but at the same time there’s 700 cases in Wyoming that didn't get a single bit of coverage at all. There’s 6,000 cases in America right now of Native American women that didn’t receive the coverage that Gabby got. I don't believe in dividing. All we ask is that our Indian women will get the same humanity and the same respect and dignity other races get.

NNO: How can readers get involved and help out?