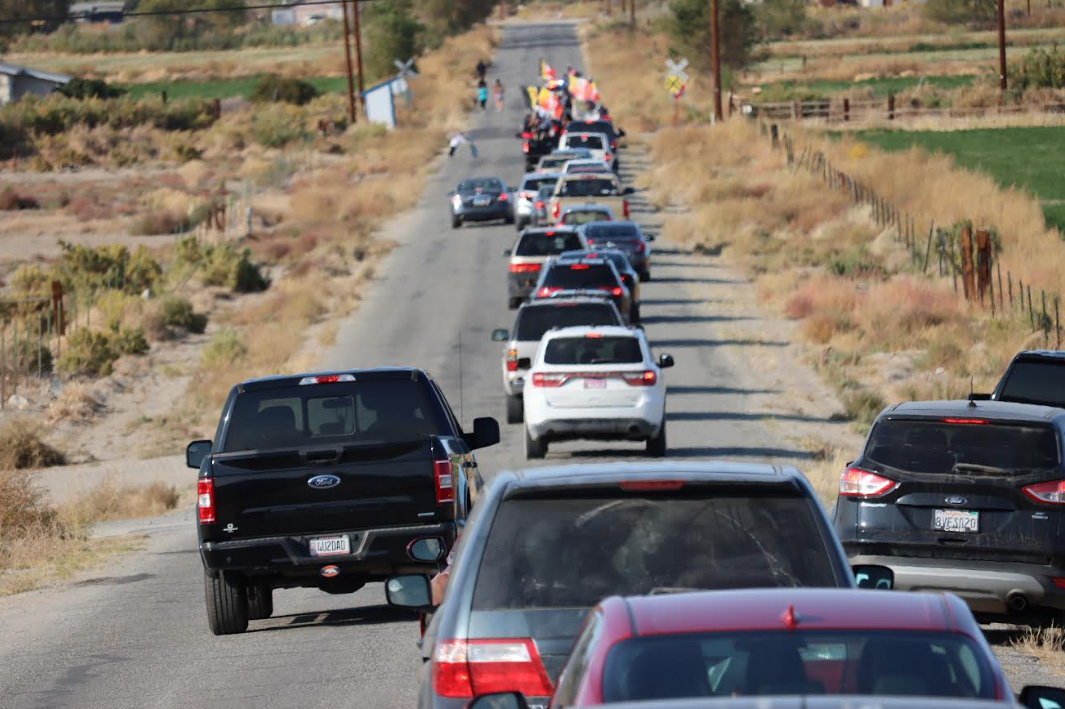 SCHURZ, Nev. — On Saturday, October 2, hundreds of people attended the funeral of Shoshone Paiute Myron Dewey on the Walker River Paiute Indian Reservation in Schurz, Nevada. He died on Sunday, Sept. 26 in a car accident at the age of 49.

Saturday’s service was preceded by an open wake service on Thursday, Sept. 30 in Fallon, Nev., about 40 miles north of Schurz, Nev., and a traditional Paiute Crydance ceremony on Friday, Oct. 1 that started at dusk and continued to 2:00 am. Many people traveled from various parts of the country, and some from out of the country, to bid farewell to Myron Dewey.

Dewey founded and operated Digital Smoke Signals, a multi-media platform that uplifts Indigenous voices, issues, and sovereignty. Dewey provided drone surveillance and media coverage during the resistance to the Dakota Access Pipeline by Water Protectors near the Standing Rock Indian Reservation in North Dakota in 2016 and 2017. Myron is co-director of the film 'Awake.' Dewey was one of several Native American journalists arrested while covering the Standing Rock resistance and faced a class A misdemeanor charge related to his use of the drone. He faced up to a year imprisonment and $2,000 fine. The charge was eventually dropped.

Those who spoke at Dewey’s service ranged from elected tribal officials and family to friends representing many walks of life.

“Indian Country has lost a true warrior,” Walker River Paiute Tribal Chairwoman Amber Torres said to Native News Online. “He was always advocating for the people and fighting for so many issues that had impacts on Native communities. He will be greatly missed throughout Turtle Island.” After the funeral service, Chairwoman Torres ran in front of the funeral procession with several others as the family took Myron’s body to the cemetery several miles from the location of the service.

Irene Montantes, a news presenter at KPFK 90.7 FM in Los Angeles and 98.7 FM in Santa Barbara, traveled to Myron’s Crydance ceremony and said, “I arrived in the early afternoon on the day of the Crydance ceremony to Myron’s land. As people started arriving, everybody’s faces and eyes were in mourning. When the ceremony started, Myron’s spirit was felt through everyone's words and dance. The stories told by everyone between the songs were heartfelt, with each person having their own unique beautiful relationship with Myron.”

Just weeks before Myron’s passing, Montantes traveled with Dewey and several others to the Line 3 encampments in northern Minnesota. They had spent a week supporting the camps and organized donations. “I was still trying to grasp what happened to Myron,” she said. “He will be deeply missed by people all over Turtle Island.”

Many paid their respects with song, prayer and dance.

“We worked on so many media projects together,” said Randy Teton to Native News Online. “I was in shock for days but being able to travel to Myron’s home to be there with his family and friends meant the world to me. Those who gifted his service with songs and prayers surely sent him in a good way.” Teton is the Shoshone woman who posed as the model for the US Sacagawea dollar coin, first issued in 2000.

Also, in attendance was Native actress Irene Bedard (Inupiat/Cree), who is known for her roles in Disney’s Pocahontas in 1995 and in Smoke Signals in 1998.

A day prior to his tragic death, Dewey live-streamed from a Navy bombing range near Yomba, Nevada. Using his familiar messaging, Dewey opposed the bombing range citing greed and genocide that has harmed his people’s homelands in Nevada.

Myron’s longtime partner, Deborah Parker, made many comments honoring Myron, reflecting on his love and dedication to his people, community, and his sobriety.

“Myron wouldn’t want anyone to drink or self-medicate themselves to tears,” said Deborah Parker in a Facebook post. “He was a man of sobriety and faced challenges straight on as much as he could. Stay safe, relatives—we have work to do. The sun will keep rising and our ancestors will keep lighting our path.”

Myron Dewey was buried in the Paiute Cemetery in Schurz, the same place as Paiute Spiritual Leader Wovoka. Wovoka was a leader in the Ghost Dance Movement, where many tribes sought to revitalize their culture in a time where Native culture and traditions were outlawed on reservation. Wovoka died in Yerington on September 20, 1932.

Dewey spent more than 20 years working to bridge the digital divide in media and technology throughout Indian Country, both as an educator and technology expert building technology infrastructures. He was most recently a visiting professor at Duke University, teaching rogue journalism at the Center for Documentary Studies.