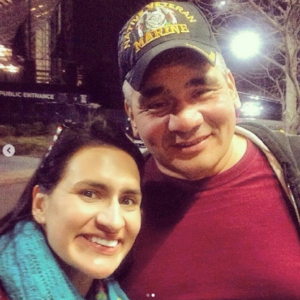 ST. PAUL, Minn. — In an Instagram message posted yesterday, Minnesota Lt. Gov. Peggy Flanagan, a citizen of the White Earth Nation of Ojibwe, announced the passing of her brother Ron, who died Saturday following a battle with COVID-19.

Her heartfelt tribute honoring her brother — which ends with “THIS is why we must #StayHome” — also gave some back history on her late brother.

“To many, he’ll be a statistic,” she wrote. “But to me, I’ll remember a loving, older brother, uncle, father, and husband.”

In recent weeks, she said her brother was diagnosed with cancer, weakening his immune system. Flanagan said he contracted COVID-19 and was ultimately put on a ventilator and medically induced coma.

"Ron was a tough-as-nails Marine who was a big teddy bear on the inside,” the post read. “He never left my dad’s side during his final weeks and took care of everyone else in the way only he could. His politics didn’t match mine AT ALL (and we joked about it constantly), but Ron was a very good man who had an amazing capacity to love. I miss him dearly.”