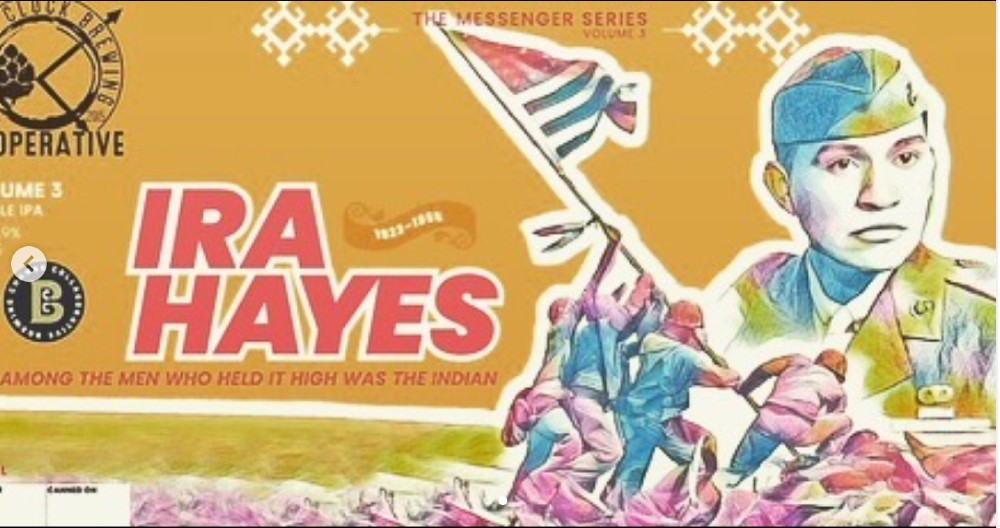 MINNEAPOLIS — A collaborative of two organizations that celebrate brewing in Minneapolis recently decided to remove labels from a beer can that displayed the name and image of Ira Hayes, one of Indian Country’s most iconic heroes, while other labels continue to be distributed in the so-called “Indigenous Heroes” beer can series which includes iconic Indigenous trailblazers Wilma Mankiller, Dr. Susan Picotte, and Sacheen Littlefeather.

Hayes was a Pima Indian from the Gila River Indian Reservation in central Arizona who helped raise the U.S. flag at Iwo Jima on February 23, 1945, during World War II.

The beer cans are a part of “The Messenger” series, a combined effort of two organizations, Brewing Change Collaborative (BCC) and Broken Clock Brewing Cooperative (BCBC) hoping to inspire change through messaging on its products. Proceeds from the products are distributed to BCC, with funds used to grow and support the organization. BCBC, the maker of the series, says on its website that, “Our organic union came about through the sheer desire to not only speak on the dissonance of America’s penchant for white privilege/preservation and its dearth of Black existence, but to ascend and become agents of change.”

Stories to accompany each person in The Messenger series were also written by a Brewing Change Collaborative Indigenous member, said BCBC’s founder.

When asked about how the images of iconic leaders came to be on beer cans, BCBC Founder and Director of Community Outreach Jeremy Mathison said, “Our Messenger series is a collaboration of beers that we do with an organization called Brewing Change Collaborative. This is our third beer in the series and the artwork was done by a local Indigenous artist.”

The Brewing Change Collaborative is a non-profit made up of Black, Native, Brown, and other People of Color in the beer, liquor, and hospitality industries, said Brewing Change Collaborative’s Board Chair Mahad Muhammad. “Our intention for starting the Messenger Series as educational collaborative work with BCBC is strictly to tell the stories of our ancestors, the marginalized, the forgotten accomplishments, and the amazingly talented young BIPOC artists, writers, musicians, chefs in our midst now, providing them with opportunities to work and get compensated for the volume of their work,” said Muhammad in an email to Native News Online.

According to Muhammed, the Messenger Series committee includes board members from both the BCC and BCBC. “As chair of the board, I’ve met and had conversations internally with our members particularly our Native members, and after speaking with friends at the Indigenous Food Lab and folks at AIM (American Indian Movement), we decided telling Ira's humble story, and accomplishments far outweighed his passing because of alcoholism,” he said of choosing Ira Hayes in the newest Messenger Series by the brewing collaborative.

Lisa Bellanger, co-director of the American Indian Movement, was appalled when she saw Ira Hayes’s name and image on a beer can. “Using a tool of genocide to honor some of our most beloved leaders is not a way to pay tribute to our ancestors, nor is using it as a means to educate about an entire group of people,” said Bellanger to Native News Online.

No one from the Indigenous Food Labs (IFL), the non-profit operation of The Sioux Chef by Sean Sherman and Dana Thompson, recalls a conversation about the collaborative or the beer. “Nobody from the IFL has any recollection or knowledge of the beer, but are equally upset about it,” Sherman told Native News Online.

“This is extremely alarming to us, and I hope that our word can be taken into consideration,” wrote Founder and Executive Director of Indigenous Food Labs Dana Thompson in an email to Broken Clock’s Founder Jeremy Mathison. “There is no one on our team that has any recollection of speaking on behalf of our organization to Broken Clock. Everyone I spoke with about this is equally horrified and unable to explain how this could have been misconstrued or misunderstood.”

After several emails between organizations, including Native News Online, BCBC’s Brewery Operations Manager decided to remove all imagery and beer from its shelves.

“This entire series is supposed to be focused on lifting up marginalized groups, highlighting often forgotten people, and providing opportunities for BIPOC communities,” said BCBC Brewery Operations Manager Jeremy Mathison. “Instead, highlighting Ira Hayes has created trauma. I’m sorry, this is unacceptable and not ok. We have removed all imagery and Ira Hayes cans from the market. I don’t know what/if anything can be done to rectify this mistake, but I’m here to do what is necessary.”

Ira Hayes was honorably discharged as a Corporal from the U.S. Marine Corps on December 1, 1945 and died on the Gila Pima Indian Reservation on January 24, 1955 from exposure to cold temperatures and alcohol poisoning. He was buried on February 2, 1955 with full military honors at Arlington National Cemetery in Virginia. His life has been commemorated by many in society, including in the 2006 Hollywood film Flags of Our Fathers directed by Clint Eastwood and the song “The Ballad of Ira Hayes” made most famous by Johnny Cash in 1961.

In no communication, verbal or written, did a spokesperson from either organization share that the initiative had the permission from the families of the people they chose to feature in the beer series made by the cooperative.

A meeting has been proposed by the Brewing Change Collaborative and other organizations next week. This is a developing story. This report comes after Native News Online reported on other breweries throughout the country who use Native American names, imagery, culture, or history.