Minn. Lt. Gov. Peggy Flanagan Tweets Minnesota is “A Place Where It is Not Safe to be Black”

ST. PAUL, Minn. — Minnesota Lt. Gov. Peggy Flanagan (D), a tribal citizen of the White Earth Band of Ojibwe, tweeted on Sunday afternoon that Minnesota is “a place where it is not safe to be Black.”

Her comments come one week today after the Daunte Wright, Jr., a Black man, was killed by a 26-year veteran Brooklyn Center, Minn. police officer who claimed she thought she was using her taser gun, not her service revolver. The officer, who was president of the police union, resigned on Tuesday.

And, Flannagan’s post to Twitter came one day before the jury will hear the closing arguments in the trial of ex-Minneapolis police officer Derek Chauvin, who is charged with the second-degree murder of George Floyd, a Black man.

“This week I have felt my role as a mother so deeply,” wrote Flanagan, describing “heartbreaking conversations” she had had with her daughter regarding Wright’s death.

“We must never forget the reason there are protesters and law enforcement in our streets is because Daunte Wright was killed by a police officer during a traffic stop,” Flanagan continued. “Katie Wright lost her son. Daunte Wright, Jr. — not yet 2 years old — lost his father. Daunte Wright should still be alive.” 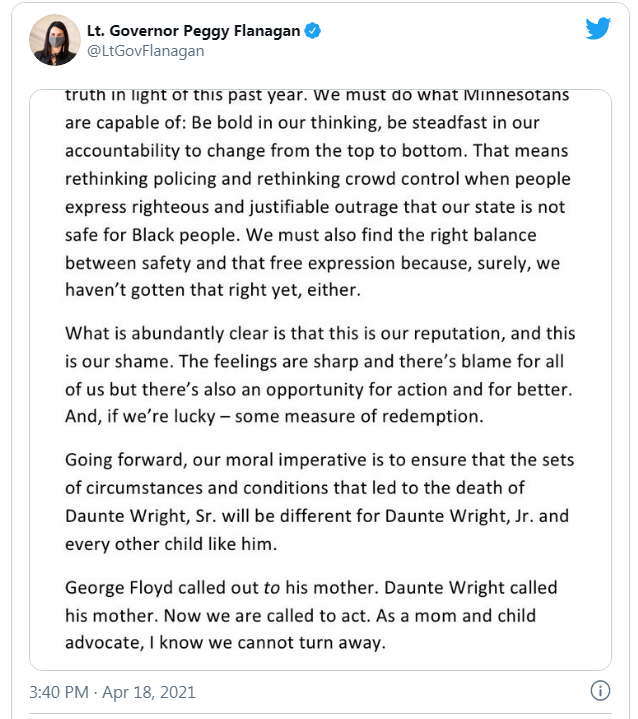 “As a child advocate,” she declared, “I am grappling with the stark reality: Minnesota is a place where it is not safe to be Black. This is the essence of an emergency we face.”

“This is our reputation, and this is our shame,” she wrote, advocating for her state to rethink policing and crowd control, to “find the right balance between safety and that free expression.”

“Going forward, our moral imperative is to ensure that the sets of circumstances and conditions that led to the death of Daunte Wright, Sr. will be different for Daunte Wright, Jr. and every other child like him.”