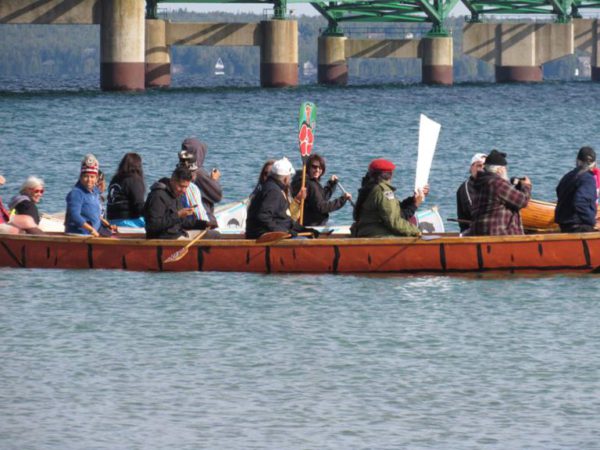 BAY MILLS INDIAN COMMUNITY — As the Bay Mills Indian Community continues its fight against big oil in Michigan, the Native American Rights Fund (NARF) and Earthjustice are offering their legal services on a pro bono basis.

The two legal organizations will pursue with the Bay Mills Indian Community all avenues to prevent the construction of a proposed tunnel to house Enbridge’s Line 5 under the Straits of Mackinac, which separate Michigan’s Upper and Lower peninsulas.

“With their application to move a section of the Line 5 pipeline to a tunnel dug under the Straits of Mackinac, Enbridge proposes a significant project that could have extreme impacts on the area’s waterways and wildlife. Over the years, the tribe has consistently fought to protect their fishing and hunting rights. Yesterday's filing continues that fight. NARF is proud to stand with the nation to ensure that the Bay Mills Community’s fishing lifeways and tribal homelands are adequately protected for generations to come,” said NARF Staff Attorney David Gover.

Earthjustice is a nonprofit public interest environmental law organization working to protect people’s health, to preserve magnificent places and wildlife, to advance clean energy, and to combat climate change. Earthjustice lent its legal services to the Standing Rock Sioux Tribe in its fight against the Dakota Access pipeline in 2016.

"We are pleased to expand our presence in the Midwest and stand with Bay Mills in defense of the Great Lakes—the largest freshwater system in the world—and the incredible and complex ecosystems that have sustained the Anishinaabe people for generations,” said Gussie Lord, director of Tribal Partnerships at Earthjustice. “Bay Mills has consistently voiced its concerns about the continued operation of Line 5 through the Straits of Mackinac and across other ceded territory in Michigan where it holds treaty-protected rights.”

On behalf of the Bay Mills Indian Community, NARF and Earthjustice attorneys filed a Petition to Intervene to participate as a party in the Enbridge Line 5 Tunnel Project proceedings before the Michigan Public Service Commission.

The legal team will also submit comments, on behalf of Bay Mills, opposing Enbridge’s request to issue a declaratory ruling. The oil giant is claiming that, due to the original 1953 easement under the Great Lakes, the project can now skirt any additional review by the Commission—including any review of environmental impacts.

BMIC — as well as many other tribes, environmentalists, and citizens — disagrees with that position.

The public comment period is open to anyone who would like to submit. Written or electronic comments will be accepted no later than May 13, officials said. Electronic comments are to be e-mailed to [email protected] and should reference case number U-20763. Written comments may be addressed to: Executive Secretary, Michigan Public Service Commission, 7109 W. Saginaw Hwy, Lansing, MI 48917.