Michigan Native Americans Want the Custer Down in City of Monroe 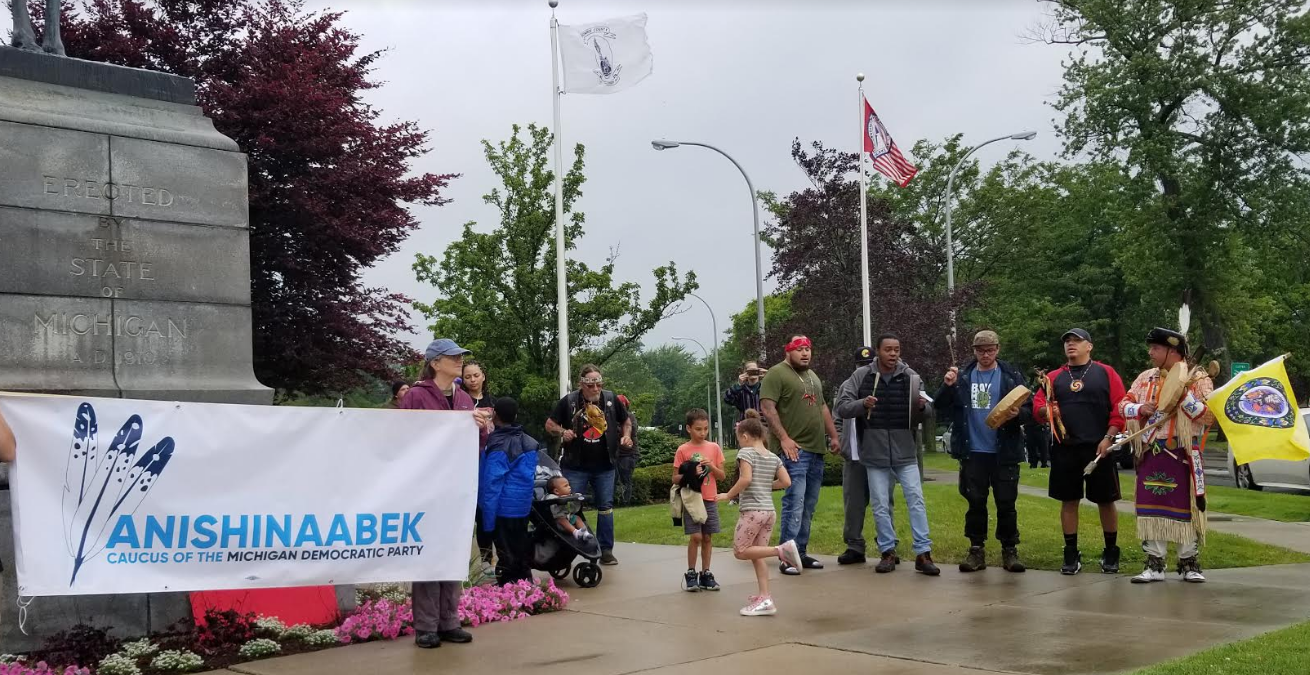 MONROE, Mich. — A yearlong effort to have a statue of Gen. George Armstrong Custer removed from downtown Monroe, Mich. has resulted in little action by the city officials in the small city 40 miles south of Detroit via I-75.

The statue was installed to honor its local hero, George Custer, who spent his childhood there and met his future wife. Dedicated on June 4, 1910 by President William Taft in recognition of the heroism and valiant efforts of the Michigan Brigade at Gettysburg in 1863, the statue has been moved numerous times.

Last year, in the midst of statues coming down across the United States in the aftermath of George Floyd being murdered by then Minneapolis police officer Derek Chauvin, a group in Monroe circulated a petition to have the statue removed.

After those who began the petition attended city council meetings, city officials agreed to engage with a consultant to study the question of whether or not the statue should stay or moved elsewhere.

On Friday, June 25, the 145th annivesary of Custer's death at the Battle of Little Bighorn, the Anishinaabek Caucus of the Michigan Democratic Party joined Good Trouble Monroe to protest the Custer’s statue.

Julie Dye, Elder of the Pokagon Band of Potawatomi read the land acknowledgement, a formal recognition of Indigenous People’s contribution:

“The State of Michigan occupies the ancestral, traditional, and contemporary lands of the Anishinaabek – Three Fires Confederacy, the Odawa (Ottawa), Ojibwe (Chippewa), and Bodewadmi (Potawatomi). The Michigan Democratic Party recognizes historic Indigenous communities in Michigan and those forcibly removed from their homelands. We further recognize the ongoing relationship of dependence upon, and respect for, all living beings of earth, sky, and water. In offering this land acknowledgment, we affirm Indigenous sovereignty, history, and experiences.”

Numerous testimonials, attesting to the heinous acts committed by Custer and to the feelings of constituents about Custer’s glorification have poured into the Monroe City Council through letters and public comments during city council meetings throughout the past year.

The support to remove the statue extends beyond the city of Monroe and beyond the Native American community.

“I speak as a white person whose family has a personal connection to General Custer and the Battle of Little Bighorn. My ancestor, Adolph Goslin, immigrated from Prussia to the United States after the Civil War, and entered into service with the US Army as a surveyor in the prairies. After Custer’s defeat on the battlefield, my ancestor’s regiment was the one sent to recover the bodies of the fallen US servicemen. We are not proud of our connection to George Custer. Custer represents the worst elements of our country and our shameful treatment of Indigenous Americans. Although we cannot change history, we can change the lessons that we draw from that history and we can begin the work of repair. I urge that you remove the statue, so we can send a clear signal that his life and behavior is not worthy of either celebration or emulation.”

Katybeth Davis, founder of Good Trouble Monroe recognized the status of most citizens as immigrants and as such must recognize standing indigenous people have. Moreover, Katybeth pointed out that there have been 10 previous rallies around the Custer statue to draw attention to the hate and divisiveness that this figure causes. This one, on the 145th year after Custer’s defeat at Little Bighorn, aims to have Custer fall again.

Speaking of Custer, Spurr said the guy died 145 years ago today at the Battle of Little Bighorn.

“It’s been here the past 111 years, 35 years after his death. It’s totally irresponsible on the part of, you know, the state, the city of Monroe, the county of Monroe, and there’s no excuse for it. It just needs to go,” Spurr said.

“General Custer is not fit to walk amongst the men and women of this country’s military. There was no integrity or courage or anything redeemable in his military performance. It is not heroic to ride into a defenseless village and murder and mutilate women and children and elderly. These are the actions of a coward. As I mentioned, this is disrespectful to all veterans and active duty personnel to honor this person, who in this day and time, would be charged with war crimes. Tried, convicted, and dishonorably discharged and possibly face execution for the war crimes he committed. We do not build monuments to war criminals.”

Garnering attention nationwide, more than 14,000 thousand people have signed a petition for removal or relocation of the Custer statue. Graham Denton, an organizer for the Custer Relocation Project for Good Trouble Monroe asked, "When in US history is it okay for U.S. soldiers to attack citizens who have surrendered to the U.S. government and are living on land that the government designated for them on legally defined land?”