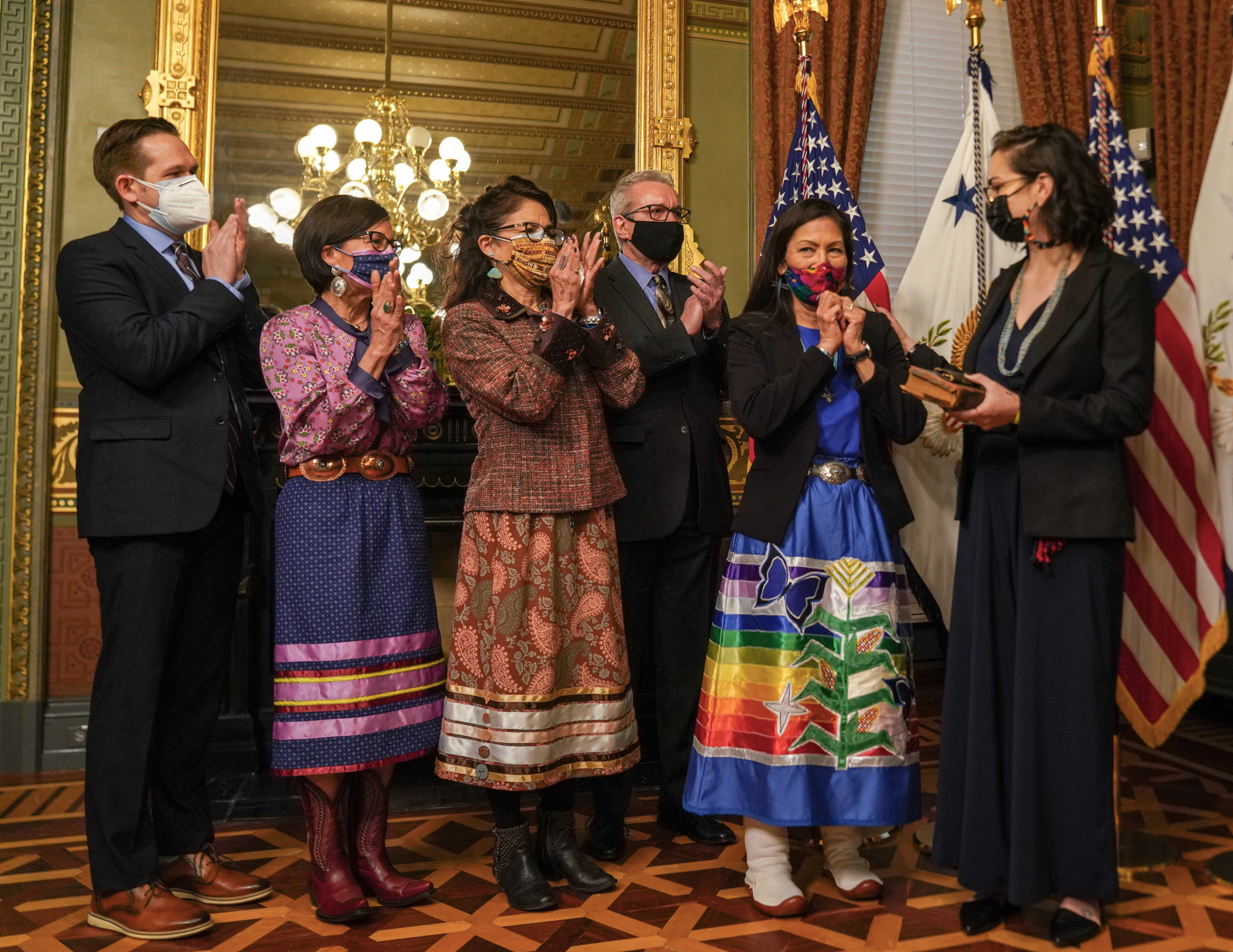 NEW TOWN, N.D. — When Agnes Woodward, 38, sat down to create the traditional ribbon skirt Secretary Deb Haaland — the newly confirmed head of Interior, and the first Native American to lead a federal department — would wear at her ceremonial swearing-in on Thursday, she said she was nervous the entire time.

“I had a fear, you know, and a part of growing up in a society that doesn't only refuse to see you sometimes, but denies your humanity as a first person of the land that you live on, there's a deep seeded... self doubt that comes with those kinds of experiences,” Woodward, who is Plains Cree from the Kawacatoose First Nation in Saskatchewan, Canada, told Native News Online.

It wasn’t until she saw Haaland wearing the skirt and lacing up her moccasins hours before the ceremony that it hit Woodward: she, too, was making history. The short ceremony was live streamed on Somáh Haaland’s Instagram account around 11 a.m. Thursday morning.

Haaland, a citizen of the Laguna Pueblo in New Mexico, was ceremonially sworn in as the 54th Secretary of the Department of the Interior with an oath administered by Vice President Kamala Harris. “History is being made yet again,” Harris said after the oath.

Watching the ceremony from her home on the Fort Berthold Indian Reservation, where her husband and their children are enrolled members, Woodward was flooded with emotions.

“They hit me really hard, especially when somebody was… shaking me like ‘you're a part of history,’ you know, and it really hit me,” she said. “It’s just a beautiful moment to be a part of when you come from places that sometimes reject or refuse to see you and to acknowledge you, that I'm a part of a moment that's huge for every single Indigenous person in the world.” 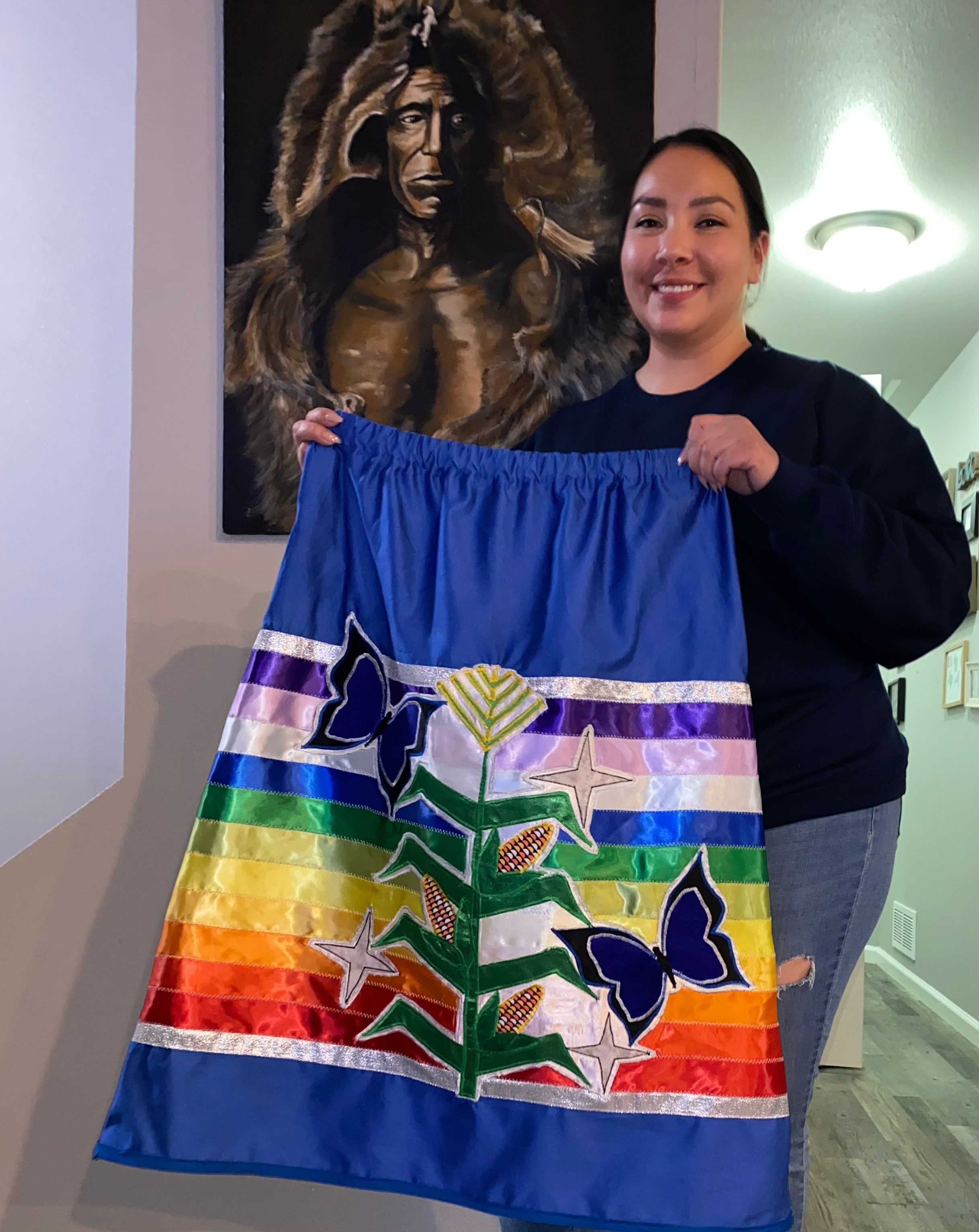 Woodward is a self-taught seamstress who has been in business with her husband under their company name ReeCreeations (a combination of the shorthand of her husband’s tribe, Arikara, and the name of her tribe, Cree) since 2018.

She is a full time advocate for the Three Affiliated Tribes’ victim service center, and began sewing skirts to represent Missing and Murdered Indigenous Women and Girls and Two Spirit when her aunt, who was murdered in 1982, was added to Canada's list of MMIWG2S and began meeting with the federal government's national inquiry into the crisis.

First Nations and Native American women, girls, and transgender people are disproportionately impacted by higher rates of violence and murder than nearly any other group in both the U.S. and Canada. The U.S Department of Justice found that American Indian women face murder rates that are more than 10 times the national average. Haaland herself introduced a bill in 2019 to increase focus on missing and murdered Indigenous women in the United States.

“So I decided, I'll do what I can from where I'm at, which was to create a ribbon skirt,” Woodward said. “I made a MMIWG2S ribbon skirt for my mom, and when I posted that I just had so many women inboxing me wanting that same design.” She said she’s made more than 300 of the skirts for family, activists and politicians ever since.

Her most high-profile client, Sec. Haaland, came to her through a connection with a friend.

Haaland had asked a tribal resident on the Fort Berthold Indian Reservation, Margaret Yellow Bird, to help her find somebody to create a ribbon skirt for the ceremony. Yellow Bird reached out to a few women to sketch designs, and Haaland picked Woodward’s design. The skirt was paid for by another mutual friend, and gifted to Haaland.

The skirt, decorated with rainbow ribbons on royal blue material, had a corn stock applique sewn on to represent the wearer’s pueblo, Woodward said. The secretary also picked out two butterflies from previous designs of Woodward’s. The seamstress completed the design with pointed stars, which she said are her signature addition.

Haaland, who wore a different ribbon skirt designed by 19-year-old Bella Aiukli Cornell (Choctaw Nation) to President Biden’s inauguration in January, also wore traditional moccasins, a beaded turquoise necklace and a concho belt. Her turquoise earrings, shaped like dragonflies, were created by Laguna Pueblo metalsmith Pat Pruitt, according to his Instagram. “To say I am proud of her would be the understatement of the year,” Pruitt wrote. “As an artist, when you create something that is more than what it appears, you have this feeling deep down. You can't explain it, you can try, yet words often fail to capture the essence of what you have put into it. This is like that.”

Woodward concurs. “It's one of the most meaningful things I've done so far,” she said, “and something that I'll always definitely be proud of.”