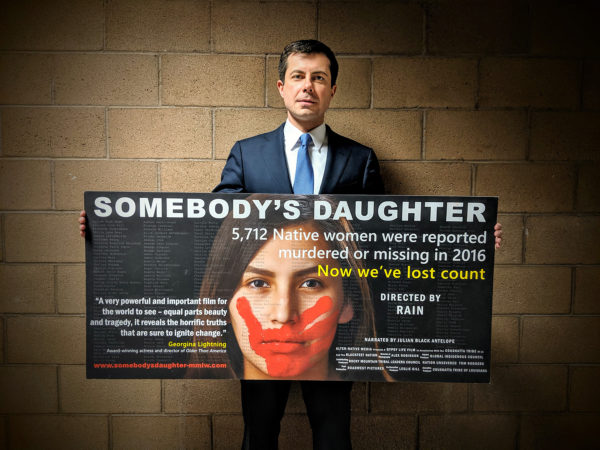 LOS ANGELES — Mayor Pete Buttigieg suspended his campaign for the Democratic Party’s nomination for President with Super Tuesday looming. “The path has narrowed to a close, for our candidacy, if not for our cause,” the former mayor from South Bend, Indiana, told supporters in his home city.

Buttigieg vied with Senator Bernie Sanders for victory in Iowa, but the botched caucus returns hindered his momentum and despite a strong finish in New Hampshire, those two primary showings did not translate to votes in the more diverse electorates of Nevada and South Carolina.

In a run that led him into the top tier of Democratic presidential candidates, Buttigieg impressed pundits and Democratic Party luminaries alike. Early in his campaign, Mayor Pete demonstrated that Indian Country mattered in his inclusive message and policy platform. Buttigieg visited the Catawba Nation, the only federally recognized Indian tribe in South Carolina, for a roundtable with tribal leaders. Chief William Harris described that meeting as “historic” for the Catawba. “We have never known or can record a time when there was a presidential candidate or a president who came to this reservation,” Chief Harris recounted.

As he suspended his campaign, Mayor Pete once again remembered Indian Country. “I am so thankful for all of the work done to impact the MMIW crisis. It is an unconscionable human rights emergency that we must work together to end. Increased awareness created by the film is an important component of driving action to protect Native women and families,” he stated.

The film Mayor Pete was referring to is Somebody’s Daughter directed by Rain and executively produced by the Sovereign Nation of the Coushatta Tribe of Louisiana. Among the 2020 Presidential candidates, Buttigieg was the first to call for “an Oliphant case fix” when he submitted a written statement to the first MMIW Tribunal ever held in the US that was co-hosted by the Blackfeet Nation and Global Indigenous Council. The Mayor wrote that it was imperative to “restore to tribes the jurisdiction to handle all civil and criminal matters arising on tribal lands.”

With Buttigieg out of the race, it falls to the remaining candidates to acknowledge the MMIW tragedy as “an unconscionable human rights emergency,” not just an Indian Country crisis. Vice President Joe Biden, buoyed by his landslide victory in the South Carolina primary, continues to emphasize the importance of the Murdered and Missing Indigenous Women crisis in his platform.

“This issue is an absolute passion of mine and will be a legislative priority if I am elected President,” Vice President Biden insisted at an event in Nevada, where he expressed his support for Somebody’s Daughter (www.somebodysdaughter-mmiw.com).

“What’s happening to indigenous women on reservations and across the United States is unconscionable and outrageous. And, it’s devastating that families are conducting their own searches for missing loved ones. It must end. The epidemic of violence against indigenous women and girls is a stain on our past and present. But it does not have to be our future,” Biden has committed.

With Sanders favored to win California’s delegate haul on Super Tuesday, Vice President Biden recently received the endorsement of Congressman Tony Cárdenas (D-CA), who wants to advance meaningful MMIW legislation in the US Congress, following the recommendations of tribal leaders in Somebody’s Daughter. The congressman representing the 29th District of California seeks to “reverse the rise of hate and bigotry in America.”

“Donald Trump’s America is an America where Congress does not include Native Americans, Latinos, African Americans, Asian Americans, or LGBTQ Americans. His vision for America is one where people like my parents and grandparents are not welcome,” Rep. Cárdenas said.

“We have a responsibility to concede the effect of remaining in this race any further. Our goal has always been to help unify Americans to defeat Donald Trump and to win the era for our values,” Mayor Pete Buttigieg closed as his historic 2020 candidacy for President of the United States ended.

Photos courtesy Alter-Native Media and I See You Photography.