Mark Charles on the State of NM Invoking the Riot Control Act to Restrict Access to Gallup NM, a Navajo Reservation Border Town 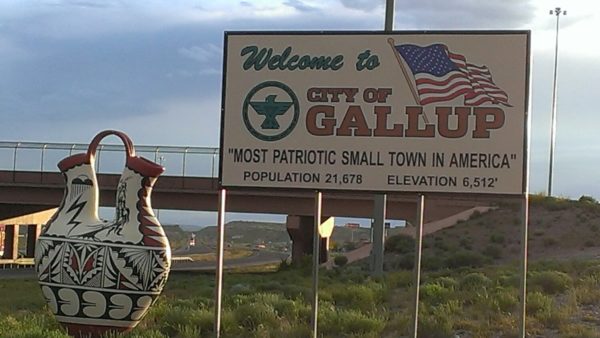 On Thursday April 30, 2020, on his last full day in office Gallup City Mayor Jackie McKinney sent a letter to New Mexico Governor Michelle Lujan Grisham requesting that she invoke the state's Riot Control Act to restrict travel in and out of Gallup in an effort to "mitigate the uninhibited spread of COVID-19 in that city."

The following morning (May 1) Governor Grisham issued a statement and executive order 2020-027 which included the directive that: 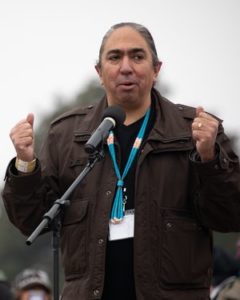 "All roadways providing access to the City of Gallup shall be closed and only Gallup residents, those who work in Gallup, and members of the media shall be permitted entry into the municipality;".

Gallup is a border town to both the Navajo Nation and the Zuni Pueblo. Every weekend tens of thousands of people from both Navajo and Zuni travel to Gallup to purchase groceries, do laundry and haul water, among other essentials. On the first weekend of every month, because so many people on the reservation live on fixed incomes, travel into Gallup is even more critical as funds grow short and food supplies low. The Navajo Nation is a food desert, almost 26,000 square miles, nearly 200,000 people and only about a dozen full service grocery stores. The Navajo Nation does not have the capacity to sell groceries to all of its residents. Travel to the border towns is essential, especially on the first weekend of the month. And with almost no notice, the mayor of Gallup and the governor of New Mexico closed access to a critical border town that provides essential services, medical care and resources to a large portion of the Navajo Nation and Zuni Pueblo.

The Gallup Police Department, New Mexico State Police and the National Guard were deployed to set up checkpoints and block access into the city.

The Navajo Nation has the third highest rate of COVID-19 infections per capita in the country (behind only New York and New Jersey). The CARES Act which was passed over a month ago, included 8 billion dollars allocated for American Indian tribes and Native Nations. On April 30, ironically the same day Mayor McKinney and Governor Grisham were deciding to close access to the border town of Gallup, six tribes filed a lawsuit against the Trump Administration because none of the allocated $8 billion had yet been distributed to tribes.

As a dual citizen of the United States and the Navajo Nation, who was born and raised in Gallup and lived for over 11 years on the Navajo Reservation, I am livid.

There is no short-term solution. The Constitution is too racist, the relationship is too dysfunctional, the history too genocidal, the historical trauma too deep, the multi-generational and communal manifestation of Perpetration Induced Traumatic Stress is still in the denial stages. And as a result, racist Executive Orders are being given, Federal dollars are being withheld, vulnerable communities are being marginalized and Native people and other communities of color, as usual, are dying in disproportionate numbers.

I call on President Trump to immediately disperse the funds allocated to Native tribes and then promptly resign. You never wanted this job anyway and you are horrible at it.

I call on Senate Majority Leader Mitch McConnell to immediately call the US Senate into session and deal with the explicit racism, sexism and white supremacy flowing out of the Republican Party and the White House.

I call on Speaker of the House Nancy Pelosi to immediately call the House of Representative back into session and deal with the implicit racism, sexism and white supremacy that is coursing through the veins of your party.

We are in the midst of a global pandemic, our nation has the highest number of infections and deaths due to COVID-19 of any country in the world, and the three of you are playing politics like naive, over-privileged children. If you cannot do your jobs and earn your paychecks by serving #AllThePeople of this nation, then please resign. The lives of everyone who is not white, land-owning and male depends on it.

Mark Charles Independent Candidate for President of the United States