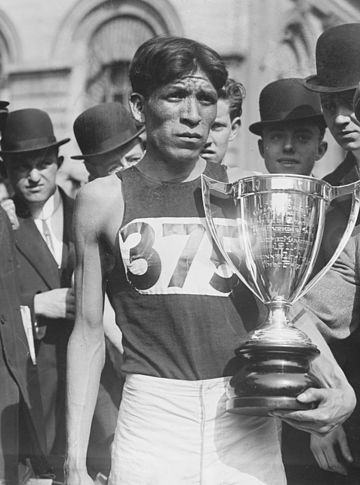 The story of Louis Tewanima, Hopi, a two-time U.S. Olympian, is a paradox of sorts: a contradiction between the policy of forced assimilation of Native peoples in America by the federal government, and the heroic feats of Tewanima who ably represented the United States; despite being held as “prisoner of war”; and while arguably, not a “legal” citizen of the United States.

“Tewanima” is a ceremonial name given him during the Wui’tsim ceremony (men’s adulthood ceremony) by his ceremonial godfather. The traditional name, Tewanima, means “Measures of the Sun” and can be interpreted or translated appropriately as “Setting a Goal or Setting a Mark”. Tewanima’s godfather was a member of the Sun Clan, therefore the name given Tewanima is associated with the Sun.

Tewanima was born a Piqös’Wugnwa (Hopi Bear Strap Clan) on the Hopi Indian Reservation. “Louis” was an English name given to him later by the federal government. As children, we called him “Loos Qua’ah”. We could not pronounce the English name Louis. “Qua’ah”means  grandfather.

Tewanima was, to a large degree, a product of the United States’ policy of forced assimilation of Native peoples in America: a paradox of sorts. His feats and accomplishments as a U. S. Olympian are well documented. Tewanima represented the United States in the 1908 London Olympics where he placed ninth in the marathon. His silver medal in the 10,000  meters in the 1912 Stockholm Olympics set the record (32:06.6) for the United States which stood for fifty-two years until another Native American, Billy Mills, a Lakota Sioux from the Pine Ridge Indian Reservation, broke the record when he won  the gold medal at the 1964 Tokyo Olympics. Tewanima also placed sixteenth in the marathon at the 1912 Stockholm Olympics.

Tewanima won the Silver Medal in 1912, the same year of the statehood of the State of Arizona.

Tewanima was selected as one of 22 greatest U. S.Track Olympians in 1954 in a ceremony held in New York City; and was the inaugural inductee to the Arizona Sports Hall of Fame in 1957. Sadly, the whereabouts of his trophies and medals are unknown. All that is available are limited copies of photographs.

Little is known of the historic events that led to Tewanima’s (and other Hopit) arrival at the Carlisle Indian School in 1907. Perhaps it is a sad history of the treatment of Native Americans that was conveniently not openly discussed. Tewanima and other Hopit were transported to the Carlisle Indian School against their will as “prisoners of war” for refusing and objecting to attending a Bureau of Indian Affairs boarding school at Keams Canyon on the Hopi Indian Reservation. Other Hopi adults were arrested and transported to the island of Alcatraz. Young Natives from other tribes were also sent to Carlisle Indian School as part of the policy of assimilating Natives into the mainstream American society.

The goal of the federal government in the 1880’s was to assimilate Natives away from their traditional ways into the mainstream American society by placing young Natives in institutions sanctioned by the federal government. Young Natives were forcibly removed from their homelands and families and placed in distant federal boarding schools and immersed in the values and practical knowledge of mainstream American society while being kept away from any traditional influences. Captain Richard H. Pratt’s (founder of Carlisle Indian Industrial School) famous quote about “kill the Indian and save the man” echoed the federal government’s assimilation policy.

On the Hopi Indian Reservation, traditional Hopi Sinom (people) rejected the federal government’s policy of forcibly removing Native children and placing them in boarding schools. Federal officials referred to them as “Hostiles.” Other Hopi Sinom who were friendly and who cooperated with the federal government’s policies were referred to as the “Friendlies."

In keeping with their traditional values and beliefs, Tewanima and others objected to doing away with their traditional ways. They were summarily rounded up and taken to a federal boarding school in Keams Canyon, Arizona on the Hopi Indian Reservation as “prisoners of war”. They were later transferred to Fort Wingate in New Mexico. Some were transferred to the Carlisle Indian School while others were sent to other federal boarding schools. Tewanima and others were transferred to the Carlisle Indian School in Pennsylvania. Hopi adults were arrested and sent to Alcatraz for objecting to sending their children to BIA schools.

Louis Tewanima, named Tsökahovi as a child, was raised in the Hopi way with strong traditional values and principles. Tsökahovi means “Muddy Hips”. His father was a member of the Snow Clan, thus the name related to snow and water. Tewanima was born in 1888 into the Piqös’gnyum (Bear Strap Clan) and was destined to someday be a traditional leader. He participated in traditional ceremonies, tended to his corn fields and his family’s livestock.

Like many young Hopit, Tewanima was a great distance runner. There was always a friendly running competition among Hopi villages, especially during the women’s traditional basket dances where long and short distance races were the  highlight of the dances. Hopit are natural born runners, thus Tewanima’s famous quote “Me run fast good, all Hopis run fast good” as he allegedly told Coach Glen “Pop” Warner so he could be allowed to join the Carlisle track and field team.

To the Hopi, running is a tradition. It is a way of life. It is a culture. Running is an integral part of Hopi ceremonies. The Hopi run as a prayer for rain and the good things of life. In fact, before every ceremonial race can start, there is a call out to the spirits in all four directions to join the runners to the finish line at the village. This is a symbolic call for the rain clouds to bring rain and moisture as the run is a prayer for rain and moisture; and for the well-being of all mankind.

Every able young Hopi is expected to be a runner. During ceremonies, young runners are designated to run great distances to gather sacred water from distant springs for the ceremonies, and to deliver sacred prayer feathers (Paho) to the distant shrines. This is considered an honor, one that is never declined. Winning a race is not as important as having ustaining sacred water that the runner can take to the corn field as a symbol of praying for rain and good crop. In the women’s society races, runners are awarded with coiled traditional plaques and yucca baskets. Every runner is appreciated for his strength and endurance and his sacrifice for good things to come.

Tewanima’s love for running led to his joining the Carlisle’s track and field team and joining the famous Jim Thorpe (Sac & Fox). He joined the Carlisle track and field team after convincing Coach “Pop” Warner that he can be of value to the team. Never to lose his dignity, Tewanima laid aside his objection to being held “prisoner of war” at Carlisle Indian School because of his love for running and in keeping with the Hopi running tradition.

Tewanima returned home to Hopi after the 1912 Stockholm Olympics and resumed his traditional ways, tending to his corn fields, herding his sheep; and participating in traditional ceremonies. He married Ömau’mana (Blanche). They had one daughter, Rose, who attended the Sherman Indian boarding school California but became very ill and was sent home. She later died of health complications in her early teens. Tewanima later became chief of the Antelope Society (Tsu’tuv), a post he held for many years. The Antelope Society is a clan responsibility of the Bear Strap Clan (Piquös’nyam). The Antelope Society and Snake Society perform the traditional snake dance every other year in the summer.

He was initiated into the Two-Horn Society (Ah’alt’) and played a key role in the kiva ceremonies. And it was during one of  the evening kiva ceremonies in the winter of  1969 where, after the men finished their  traditional smoking, he left to return home  for the evening but mistakenly took a  distant light from another village across the  valley as the light from his house. He walked toward the light and fell several feet down the edge of the mesa to his death.

There is an irony, or a paradox in the story of Tewanima. He was considered a federal “prisoner of war” yet he represented the United States in two world Olympics as a great “American” athlete. He never lost his dignity as a traditional Hopi. He represented Carlisle Indian School, the very institution where he (and many other Native youth) was held against his will as “prisoner of war” by the federal government. More ironic is how Tewanima and the famous Olympian Jim Thorpe represented the United States in the Olympics while arguably not considered as legal citizens of the United States. But it didn’t matter because the United States was represented by great First American athletes. In fact, President Theodore Roosevelt once recognized Tewanima’s accomplishments and told Tewanima that he was “extremely glad a real American Indian competed for America and represented the country abroad,” not realizing the dilemma of citizenship of Native Americans.

So did he (and Jim Thorpe) legally represent the United States? Yes, because in his mind, he (and Jim Thorpe) had every right to represent his homeland. His love for running overshadowed the conditions under which he was institutionalized at Carlisle…a contradiction of sorts. In the end, Tewanima never lost his dignity. He was never assimilated. He never mastered the English language and never accepted the modern lifestyle. He remained true to his convictions and beliefs as a Hopi and became a traditional and religious leader.  He is considered a hero and a role model by the Hopi Sinom; and should be considered a national hero by the American people.

Benjamin Nuvamsa grew up with Louis and Blanche Tewanima at the Village of  Shungopavi. Nuvamsa is a member of the Bear Clan  and Kii’kyum (village lead clan) of Shungopavi. Son of Peter Jr. and Joan Nuvamsa, Ben is former tribal  chairman of the Hopi Tribe. Nuvamsa is President of  KIVA Institute, LLC dedicated to serving tribal  nations throughout Indian Country.

Donate
Free Newsletter
About The Author
Author: Benjamin NuvamsaEmail: This email address is being protected from spambots. You need JavaScript enabled to view it.
Breaking News