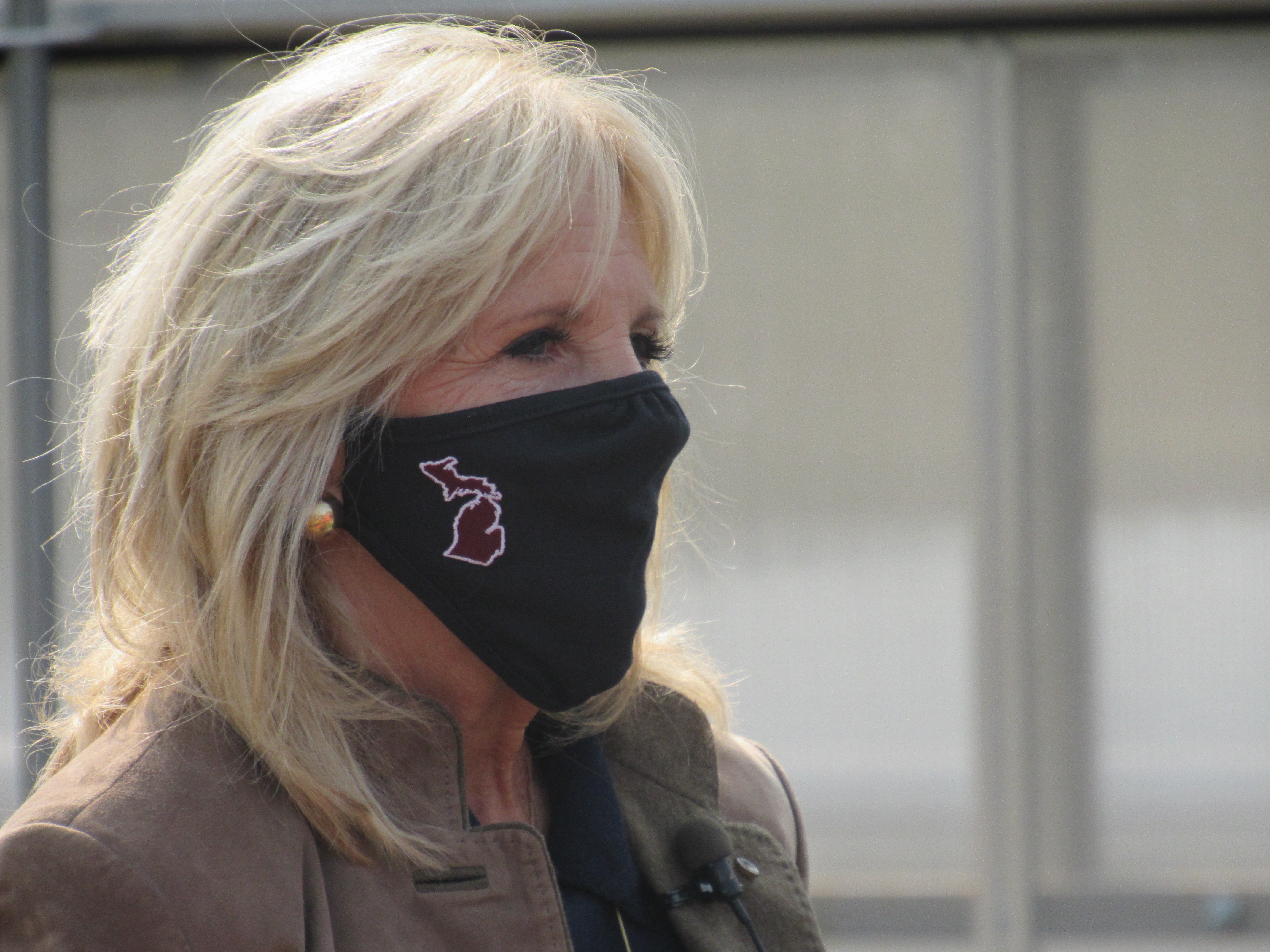 GRAND RAPIDS, Mich. —  With less than 50 days until the general election on Nov. 3, Jill Biden, the wife of Democratic presidential nominee Joe Biden, brought the Biden-Harris campaign to Michigan on Tuesday morning.

Michigan is a battleground state. Donald Trump won the state by only 10,704 votes—or .23 percent—in 2016. Michigan is one of seven states that have been identified by Four Directions where American Indians can influence election results.

On Tuesday morning, Biden visited Kid’s Food Basket in Grand Rapids, Mich., which prepares meals for children who attend schools where 70 percent or more of the student population receive free or reduced-cost lunch. 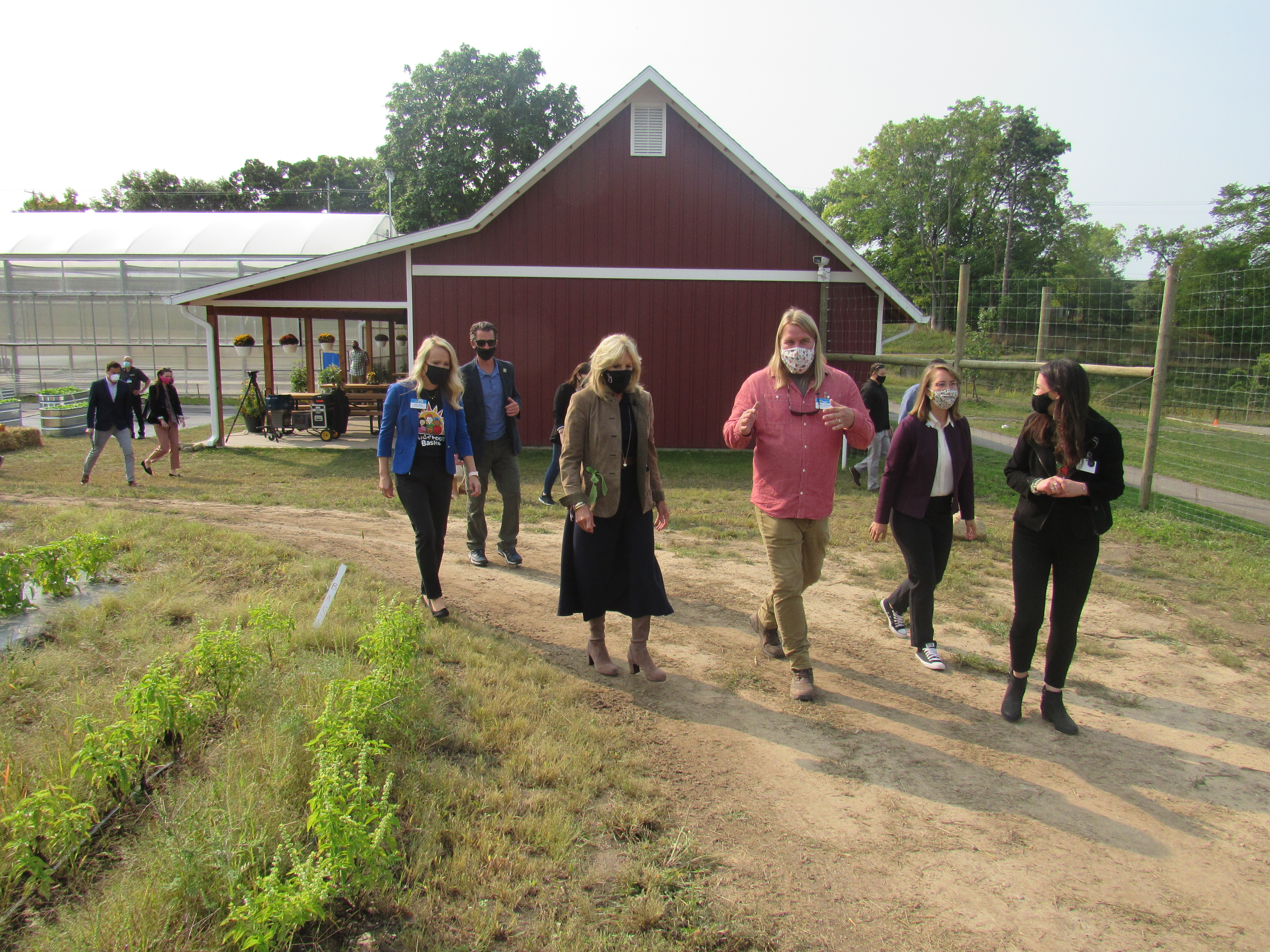 After inspecting produce, Biden asked organizers if she could tour the gardens. (Photo by Levi Rickert)

She took time to talk to Mary K. Hoodhood, a paraplegic since 1980 as a result of a car accident. Hoodhood founded Kid’s Food Basket in 2001 after she found out kids in Grand Rapids went to bed hungry because they did not have food at home.

A chemical-free, 10-acre farm provides meals to four counties in West Michigan. Volunteers and local high school students help manage the farm, and the organization serves meals to more than 6,300 each weeknight.

Biden thanked reporters for covering the event, noting that the success of Kid’s Food Bank should be shared to people across the country.

"A program like this should be national, should be in every state," she said. 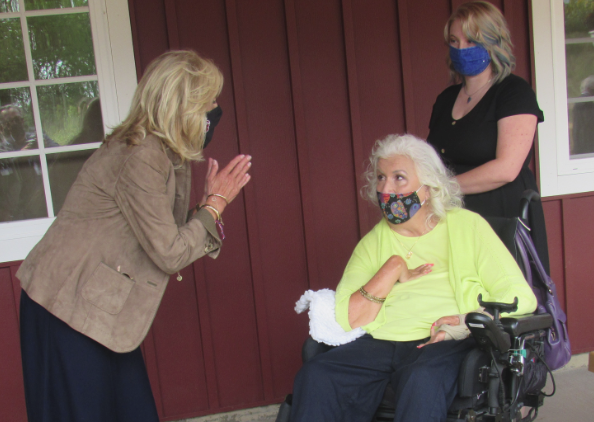 “During a pandemic, as well as you all know, we have so much food insecurity,” Biden said. “This program is unbelievable, what they’re doing to help this community.”

Due to Covid-19, the event was not open to the public and the press were required to wear facial masks and stand six feet apart.

Standing outside a greenhouse and flanked by planting boxes, Biden took a few questions from the assembled press.

Biden said she was in Michigan because the campaign isn't taking "one vote for granted." She's previously campaigned in Flint and other cities on behalf of her husband, in addition to doing several virtual events.

On Monday evening, Biden hosted a virtual event to commemorate the 26th signing of the Violence Against Women Act that was signed into law by President Bill Clinton. Representing Indian Country on Monday’s night program was North Dakota state Rep. Ruth Buffalo, the first American Indian woman to serve in the North Dakota legislature. Buffalo spoke about the Missing and Murdered Indigenous Women and Girls epidemic that exists in Indian Country.

After her visit to Grand Rapids, Biden went to Battle Creek, Mich., where she met with Michigan Gov. Gretchen Whitmer and members of the Michigan National Guard, assuring them that her husband, if elected president, would keep their funding in place.