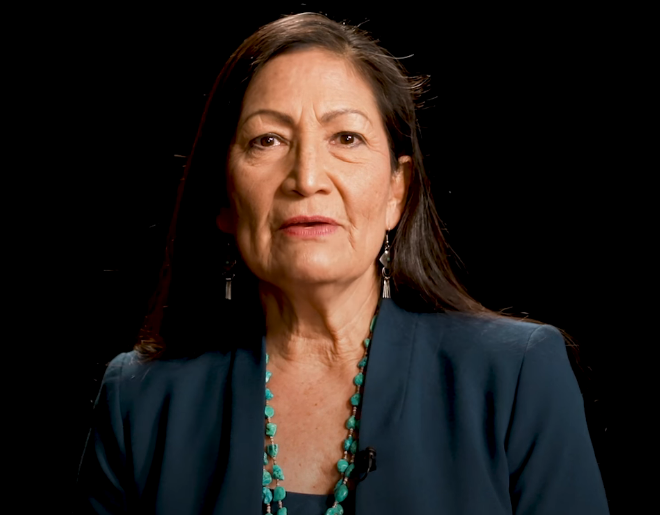 WASHINGTON — Interior Secretary-designee Deb Haaland hosted on Monday morning a virtual roundtable with tribal leaders from Indian Country. During the meeting, the Secretary-designee reiterated President-elect Joe Biden’s promise to tribal nations and Indigenous communities to fully honor America’s sacred trust and treaty obligations to tribal nations.
During the virtual meeting, she pledged, if confirmed, she would ensure that the Interior Department engages in early, frequent, and meaningful consultation with tribal leaders on all decisions that affect indigenous communities.
Haaland was nominted by President-elect Biden on Dec. 17, 2020 to be the secretary of U.S. Dept. of the Interior. If confirmed by the U.S. Senate, Haaland will become the first American Indian ever to serve in a presidential cabinet.
Haaland also discussed how the incoming Biden-Harris Administration will work in coordination with tribal communities who bear disproportionate harm from long-running environmental injustices and are being adversely affected by the impacts of climate change on their homelands.

Secretary-designee Haaland reiterated that she shares the president-elect’s commitment to advancing environmental justice and empowering communities who have shouldered the burdens of environmental negligence. She will help implement the president-elect’s vision to turn the climate crisis into an unprecedented opportunity to create millions of good-paying union jobs across the country, power our economy with clean energy, conserve and restore our nation’s lands and waters, position the United States as an exporter of 21st century products, and make our economy stronger, more resilient, and inclusive.