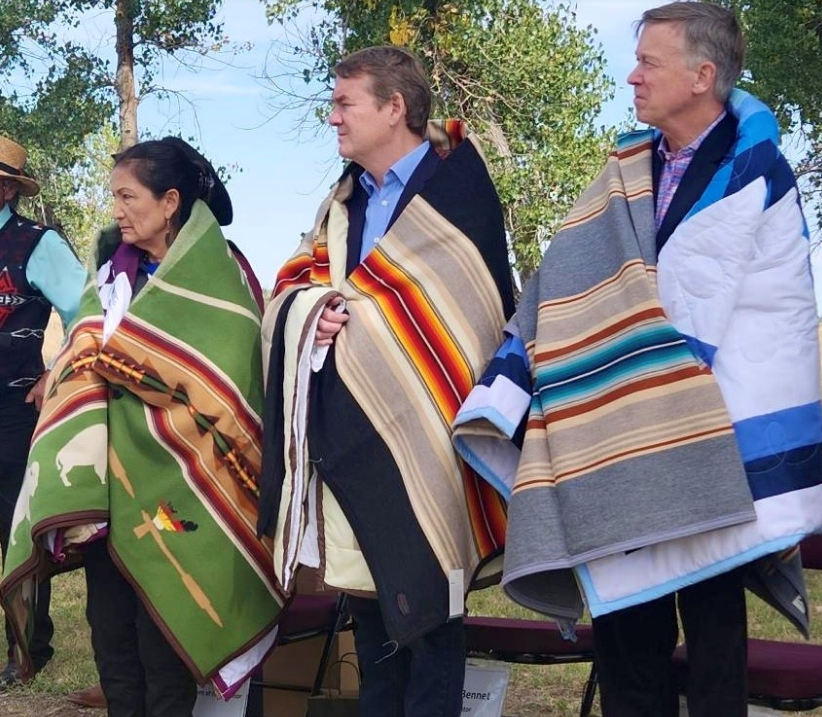 During the visit, it was announced that 3,500 additional acres will be added to the  Sand Creek Massacre National Historic Site. This addition is made possible with financial support from the Land and Water Conservation Fund (LWCF).

The Sand Creek Massacre occurred on November 29, 1864, when U.S. soldiers attacked an encampment of approximately 750 Native people. The soldiers killed 230 people — mostly women and children. The Sand Creek Massacre National Historic Site was established in 2007 to preserve and protect the cultural landscape of the massacre and enhance public understanding of this horrific event.

“It is our solemn responsibility at the Department of the Interior, as caretakers of America’s national treasures, to tell the story of our nation. The events that took place here forever changed the course of the Northern Cheyenne, Northern Arapaho, and Cheyenne and Arapaho Tribes,” said Secretary Haaland. “We will never forget the hundreds of lives that were brutally taken here – men, women and children murdered in an unprovoked attack. Stories like the Sand Creek Massacre are not easy to tell but it is my duty – our duty – to ensure that they are told. This story is part of America’s story.”

“This is a long overdue step to respect and preserve land sacred to the Northern Cheyenne, Northern Arapaho, Cheyenne, and Arapaho Tribes,” Bennet said. “Today's ceremony is about remembering the atrocity at Sand Creek and honoring our government's continuing obligations to Tribal communities.”

The acquisition was made possible through funding from the LWCF. Since his arrival to the U.S. Senate, Bennet has championed LWCF, introducing legislation to fully fund the program in every Congress since 2010. In 2020, he introduced the bipartisan Great American Outdoors Act (GAOA) to permanently and fully fund LWCF. GAOA was signed into law in August 2020.

The land addition announced today will allow the NPS to increase public opportunities to experience and interpret the site’s stories and history. In addition, the expansion of the historic site will contribute to one of the most intact shortgrass prairie ecosystems within the National Park system, providing habitat for a wide range of plants, wildlife and species of special concern.