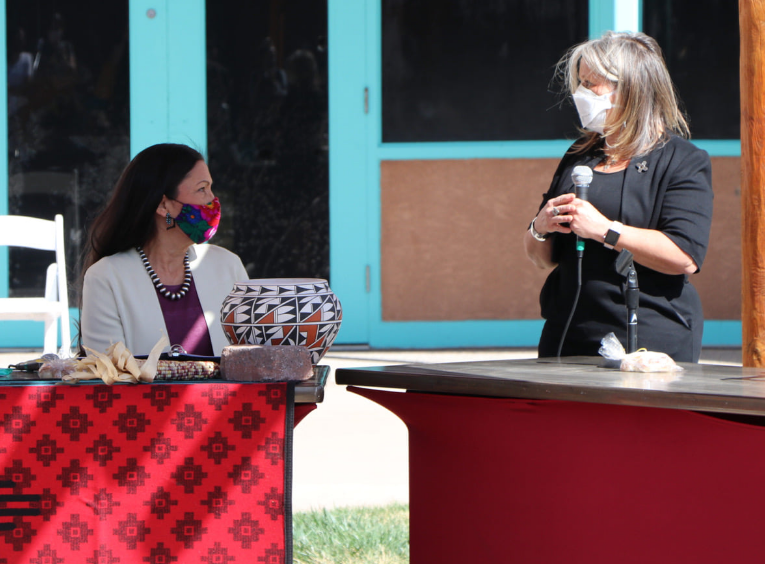 ALBUQUERQUE, N.M. Today, Interior Secretary Deb Haaland attended a listening session with the All Pueblo Council of Governors in Albuquerque, N.M. to hear about their expeiences leading during Covid-19 pandemic. Also in attendance were New Mexico Gov. Michelle Lujan Grisham and the New Mexico congressional delegation.  Haaland also spoke about President Biden’s American Rescue Plan, according to another press release from the Interior Department.

Haaland is traveling this week in New Mexico and Utah on her first official trip in her new role leading the Interior Department to consult with federal, state, and tribal officials and stakeholders on stewardship of two national monuments, and the impact of the pandemic on tribal communities.

The trip comes as an effort to push forward Executive Order 14008, aimed at protecting public health and the environment and restoring science to tackle the climate crisis, according to an Interior Department spokesperson, Tyler Cherry. Part of that order includes a review of the boundaries and management conditions of two national monuments, Bears Ears and Grand Staircase-Escalante National Monuments.

Bears Ears and Grand Staircase-Escalante National Monuments in Kane and San Juan Counties in Utah—both sacred Native American sites—were both threatened under the former administration when then-President Donald Trump significantly reduced the size of the protected areas in 2017.

Last week, Haaland spoke with climate justice advocate and star Mark Ruffalo over an Instagram livestream about the Biden-Harris administrations’ plan to serve Indian Country. Haaland said the sacred sites are important to every person living in the country, because Native history is American history.

“Just because the sacred sites aren’t within exterior boundaries and tribes, it doesn't mean that we shed our obligation to care about those sites,” Haaland said on Friday. “Regardless of where these sacred sites are, if they're traditional and historical, and we have learned that it's our obligation to care for them. We will do that until we die.”

To date, administration officials from the Departments of the Interior, Commerce, and Agriculture have held Tribal consultations and met with stakeholders, including Utah Governor Spencer Cox; members of the Utah congressional delegation; representatives from Kane, Garfield, San Juan, and Grand Counties of Utah; members of the Bears Ears Inter-Tribal Coalition; non-profit organizations; and small business stakeholders.

Haaland’s itinerary for the day includes an early visit to Bears Ears, followed by a 3 p.m. stakeholder meeting, an outline from the Interior Department reads.