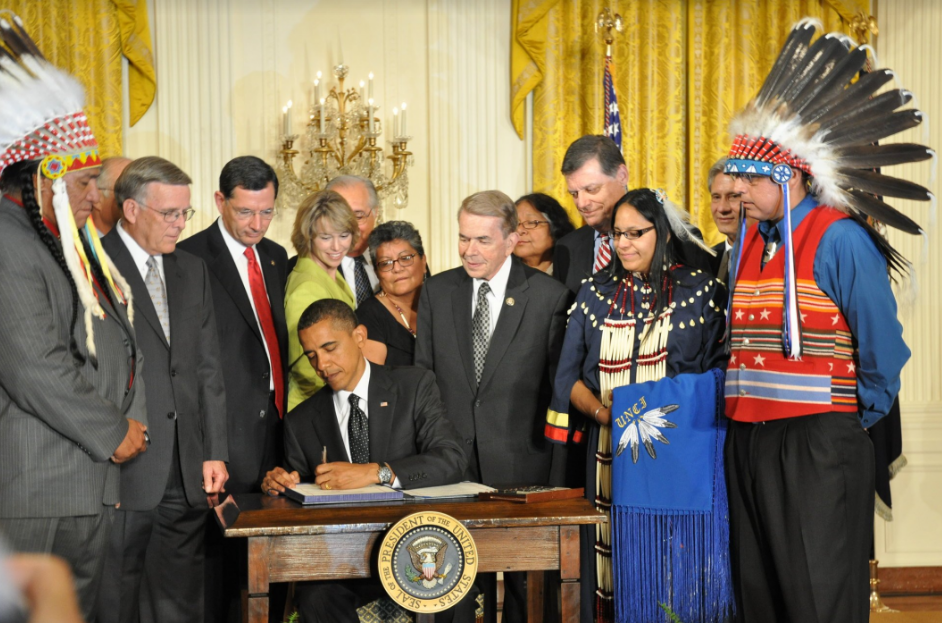 Former Democratic Michigan Congressman Dale Kildee, whose name appears on 134 pieces of legislation directly impacting Native Americans, passed away on Wednesday, October 13, 2021. Kildee, who served a Michigan district that included the city of Flint, served 18 terms in Congress from 1977 – 2013. During his time in Congress, Kildee became known as an expert on Native American policy and co-founded the Congressional Native American Caucus. Rep. Kildee was 92.

“For most of my public career, both in the Michigan State Legislature and in the U.S. Congress, I have had the honor and privilege to work with Indian tribes to bring some justice to Indian Country,” said Mr. Kildee after leaving Congress in 2013.

Former Senator Ben Nighthorse Campbell (Northern Cheyenne, (R-CO), who served with him while he was a member of the House of Representatives remembers Kildee as a friend and a lawmaker who worked hard on behalf of Indian Country.

“He was a wonderful man and a good friend, who will be sorely missed,” Campbell said to Native News Online. “He carried a copy of the Constitution in his suit pocket and took it out when he needed to reference it during a debate. We should have more people in Congress like him now. He did a lot for the good of the nation.”

For Kim Teehee, the Cherokee Nation’s director of governmental relations and senior vice president of government relations for Cherokee Nation Businesses, the passing of Kildee is significant. She worked for Kildee for 11-½ years as the first senior advisor to the bipartisan Congressional Native American Caucus from 1998 – 2009.

“I knew the day would come but still I wasn’t prepared to hear that Dale had passed away. My mind is flooded with precious memories. When I was tapped for a White House appointment in the Obama Administration, he galvanized congressional support and helped secure my historic position. He was a gentle soul with a warrior’s spirit. He believed in civil discourse. He despised unkindness,” Teehee said to Native News Online in an email.

Teehee recalled how Kildee embraced tribal relations as a congressman that led him to co-found the Congressional Native American Caucus. He did so, Teehee says, after anti-Indian measures started passing the House only to be stopped in the Senate.

“His commitment began when, as a kid, his dad took him to the land in Michigan where a tribe’s village once stood but was burned to ashes when the people refused to leave. He never forgot that story or the other injustices that Native people endured,” Teehee said.

“He knew a bipartisan caucus was necessary to educate members of Congress about Indian Country issues. What began as a caucus of 15 members had grown to over 100 members. My job was to work across partisan divides with House leaders, caucus members, committees, and with tribal leaders. As co-chair of the caucus, Dale successfully advanced legislation on myriad topics from education, health care, transportation, appropriations to housing,” Teehee continued.

“Since its inception, the Congressional Native American Caucus has adhered to the bipartisan virtue Dale Kildee lived throughout his life. He was a great champion for Indian Country, and he worked tirelessly to remind his colleagues that our U.S. Constitution acknowledges tribal sovereignty. We remain dedicated to that purpose and honor his commitment to Indian Country by continuing our strong government-to-government relationship with tribal Nations.”

While serving in the Michigan House of Representatives, Kildee was instrumental in the passage of Michigan Indian Tuition Waiver, which allows Michigan Native Americans students who have been residents of the state for at least one year and tribal citizens of a federally recognized tribe to attend a state of Michigan higher education institution without paying tuition.

Aaron Payment, chairperson of the Sault Ste. Marie Tribe of Chippewa Indians and recording secretary of the National Congress of Americans Indians, remembers Kildee for the work he did on behalf of tribes seeking to gain their re-acknowledgement in the federal recognition process.

“Rep. Kildee was one of the first and strongest advocates for positive Federal Indian Policy in modern times. He also was a champion for tribal federal acknowledgement supporting several Michigan Tribes that sought their federal recognition,” Payment told Native News Online. “He was one of the co-founders of the Congressional Native American Caucus long before any American Indians were elected to Congress to promote a coalition of supporters of tribes to come together. He was also a personal friend who would listen and could move mountains to help tribal leaders advocate for upholding the treaty and trust obligation. I feel a personal debt to Dale Kildee for his friendship and advocacy.”

Saginaw Chippewa Indian Tribe of Michigan’s public affairs director Frank Cloutier says part of the tribe’s trust land in eastern Michigan lies in a portion of Kildee’s district and enjoyed working with him.

“Dale Kildee was a man who could see past the differences in people, the color of their skin and the many stereotypes of minorities. He understood the constitutional equality in our human race. A champion for many and a true champion of education in Indian Country. He will truly be missed. Godspeed my friend you deserve your rest,” Cloutier said.

Kildee’s influence was felt throughout Indian Country. The USET Sovereignty Protection Fund (USET SPF), a non-profit inter-tribal organization advocating on behalf of 33 federally recognized southern and eastern tribes, said this after his passing:

“Congressman Kildee will be remembered as a genuine friend and ally to tribal Nations. On behalf of the entire USET/USET SPF family,  we extend our gratitude to him for his steadfast work in protecting and promoting our inherent sovereign rights and authorities, as well as our deepest condolences to his family, friends, and all those whose lives were touched by him. We send blessings and prayers as he embarks upon his journey into the spirit world.”