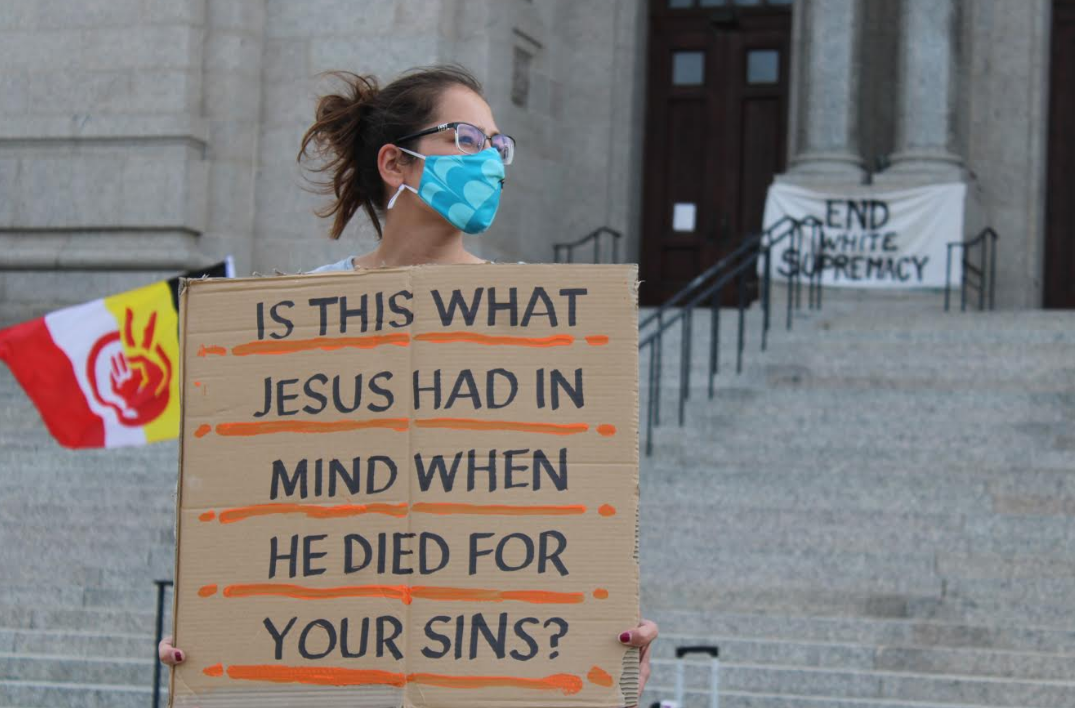 SAINT PAUL, Minn. — The American Indian Movement (AIM) Twin Cities chapter held a press conference and protest on Thursday outside the Cathedral of Saint Paul in the Saint Paul, Minn,

The event brought several dozen people from around the Twin Cities to protest the recent discoveries of more than 1,000 children found in an unmarked graves at various residential schools in Canada.

“My name is Michael Anthony, after the Saint Michael and Saint Anthony,” AIM Twin Cities Chairman Mike Forcia said at the press conference. “The church must acknowledge its participation in the genocide of our people.”

Last year, Native News Online reported that Forcia was charged and convicted last year for the toppling of the Christopher Columbus at the Minnesota State Capitol grounds.

Organizers posted American Indian Movement flags, sang on the drum, and addressed the history of boarding schools and its complicated relationship with the Catholic church. Demonstrators held signs in traffic that read "Search Every School!” and “From Canada to the USA, Honor Native Treaties.”

The demonstration was held in conjunction with Cancel Canada Day, where tens of thousands of people demonstrated and marched throughout towns and cities in Canada. On day normally celebrated by Canadians for their country’s confederation on July 1, statues of Queen Victoria and Queen Elizabeth II were toppled. Thousands protested from coast to coast over the mass graves of Indigenous children being discovered at residential boarding schools that were operated for decades by the Canadian federal government and Catholic churches.

“As more stories break of the bodies of over one thousand children being recovered from mass graves at boarding school sites in Canada, I find myself holding my eight-year-old daughter close each night,” Minnesota Lieutenant Governor Peggy Flanagan said to Native News Online. “These children never got to go home to their parents and their communities who loved them. They endured physical and sexual abuse, and their childhoods were stolen under the guise of ‘Kill the Indian, and save the man.’”

“Kill the Indian, and save the man” was the ethos instilled by General Richard H. Pratt—founder of the Carlisle Indian Industrial School in Pennsylvania, which established a model for other Indian boarding schools. It's goal was to strip American Indian children of their culture in order to "Americanize" them. At the Carlisle Indian School and at other Indian boarding schools, American Indian children were strictly forbidden to speak their tribal languages or practice their spirituality. Their clothing was burned and replaced with military drab, and long hair was cut and styled in Euro-American fashion.

For American Indians, the boarding school left a lasting distrust of the entire U.S. education system. According to the National School Boards Association, Native American students performed two to three grade levels below their white peers in reading and math. They were two times more likely to drop out of school than their white peers, according to a study conducted by National Caucus of Native American State Legislators.

“This is not ancient history or a Canadian issue; our parents and grandparents in Minnesota and across the United States attended these institutions, but too many people do not know about this painful chapter in our history,” Flanagan added.

Recently, at the National Congress of American Indians’ Mid Year Conference, Secretary of Interior Debra Haaland announced that she established the Federal Indian Boarding School Initiative, which is tasked with identifying past boarding schools throughout the country and investigating possible burial sites, then identifying those buried and returning the remains to their rightful tribes. A report from the initiative is due to Secretary Haaland on April 1, 2022.

“It is time to tell the whole truth about our history, and it is time to take action to ensure that Native children and people are safe, valued, and protected in their communities now and in the future,” Flanagan said.