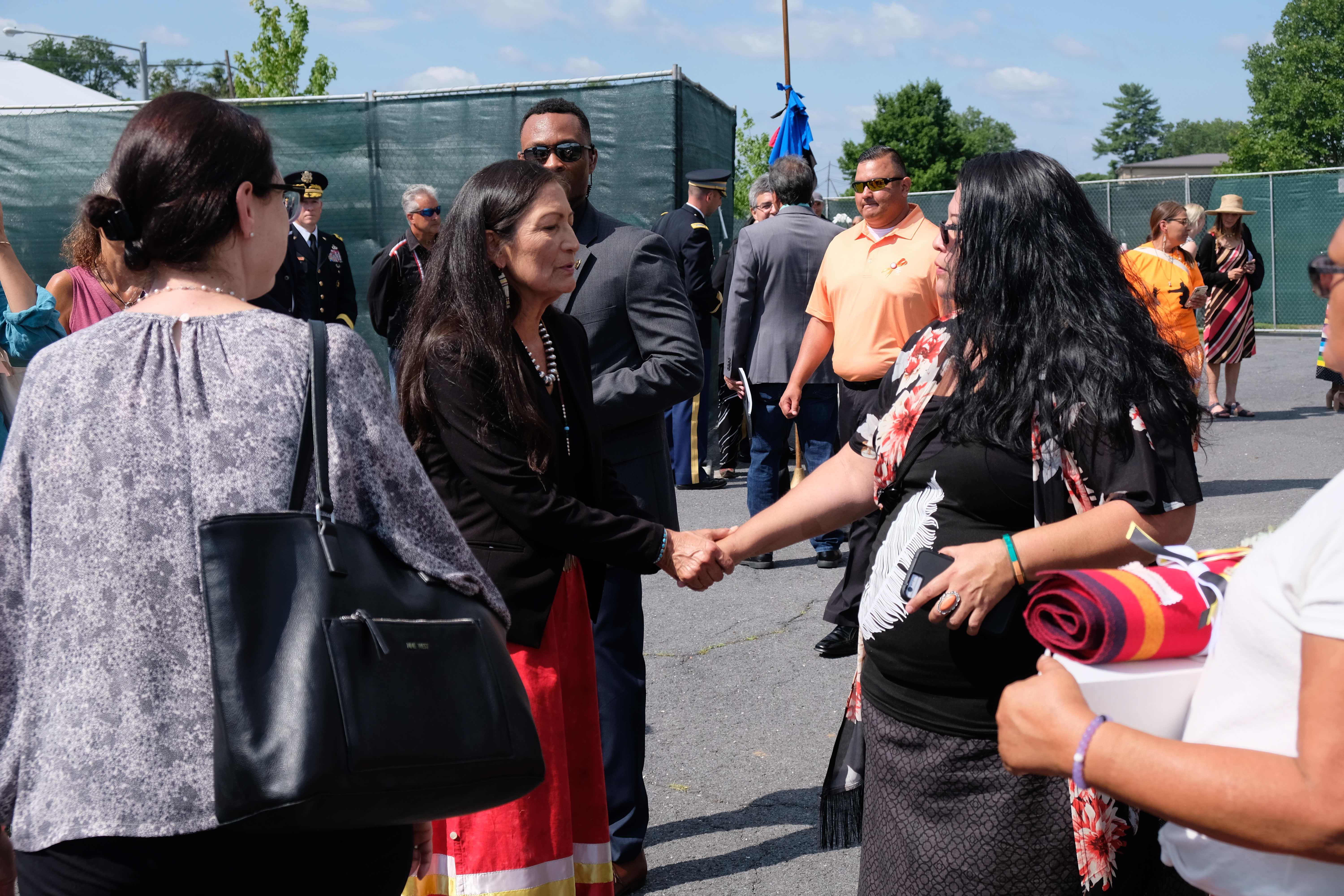 In the wake of the discovery of several mass graves holding the remains of Indigenous youth who died at residential schools in Canada, the United States’ first Native American cabinet secretary, Deb Haaland, is driving America's investigation into its own dark history.

“We're not sure what we'll find out yet,” Haaland told Native News Online in an interview last week.

Beginning in 1879 and lasting through the 1960s, Native American children were forced into Indian Boarding Schools across the country for the express purpose of assimilation.

In 1885, six years after the formation of the country’s first Indian boarding school opened in Carlisle, Pa., Commissioner of Indian Affairs Hiram Price said "it is cheaper to give them education than to fight them,” according to Tabatha Toney Booth’s research paper “Cheaper Than Bullets: American Indian Boarding Schools and Assimilation Policy, 1890-1930.”

These institutions, which numbered more than 350, stripped children of their names, languages, clothing, and cultures in an effort to assimilate them to western society. An unknown number of children died while at the schools, and their bodies were never returned home to their communities.

“We're committed to finding out as much information as possible,” Haaland said on the federal initiative announced last month, adding: “Where the schools were located, if and where there were any burials and why, what the causes of death were, who the students were, what tribes they were from. These are all unanswered questions in many regards.”

Haaland told Native News Online that the particulars of the initiative are still being worked out, but that the initiative will include tribal consultation, speaking with descendants, and working with organizations “who have been dedicated to this issue for a long time.”

On Wednesday, July 14, the Rosebud Sioux Tribe of South Dakota exhumed nine of its children who died at Carlisle Indian Industrial School 142 years ago.

At the exhumation ceremony, Haaland—invited by the tribal youth council—addressed a crowd of U.S. Army members, politicians, descendants, tribal youth and actor and activist Mark Ruffalo.

“I wish so much that this was not a part of intergenerational trauma,” Haaland said, standing beside nine photos of each exhumed Rosebud Sioux child. She shared that she’s “a product of boarding schools”—her maternal grandparents were taken at 8 years old from their reservation and brought to St. Catherines Indian Boarding School in Santa Fe, N.M.—and added that Americans are not often taught about “the worst part of our history.”

When asked why tribal communities should trust the federal government to essentially investigate itself in the new boarding school initiative, Haaland said she thinks it’s a new era for Indian Country.

“Number one, we have a president—President Biden—who is deeply committed to tribal consultation, to tribes having a seat at the table, to making sure that the treaty and trust responsibility by the federal government are met in an honorable way,” she said.

“And second, we've never had a Native American cabinet secretary in the Department of the Interior prior to now, and I am a descendant of the boarding school era. I know precisely how those policies affected my grandparents, and I feel very committed to ensuring that we are doing something to alleviate the pain, the suffering of people just like me, who have been wanting answers for a long, long time.”

Haaland said that healing, for her, will be naming each child that never returned home, including the 14 “unknown” graves holding Native youth at the Carlisle cemetery.

“I feel very strongly that we have to be thoughtful and loving in the way we go about this, because we have to honor all of their legacies,” Haaland said. “We have to remember that… when we read the headlines about Canada finding 700 children in a grave. Each one of those children had an identity, each one of those children were loved by their family. I want to make sure that we are keeping that in mind as we move forward, that every single person is an individual, and every single person has a spirit, and has their own families.”

Despite the federal government’s efforts to suppress and extinguish Indigenous people in the United States during the boarding school era, Haaland said the policy failed.

“We have distinct cultures and languages and communities to this day, and so clearly, the cultural genocide part didn't work, because we're still here,” Haaland told Native News Online. “I'm very grateful for that.”