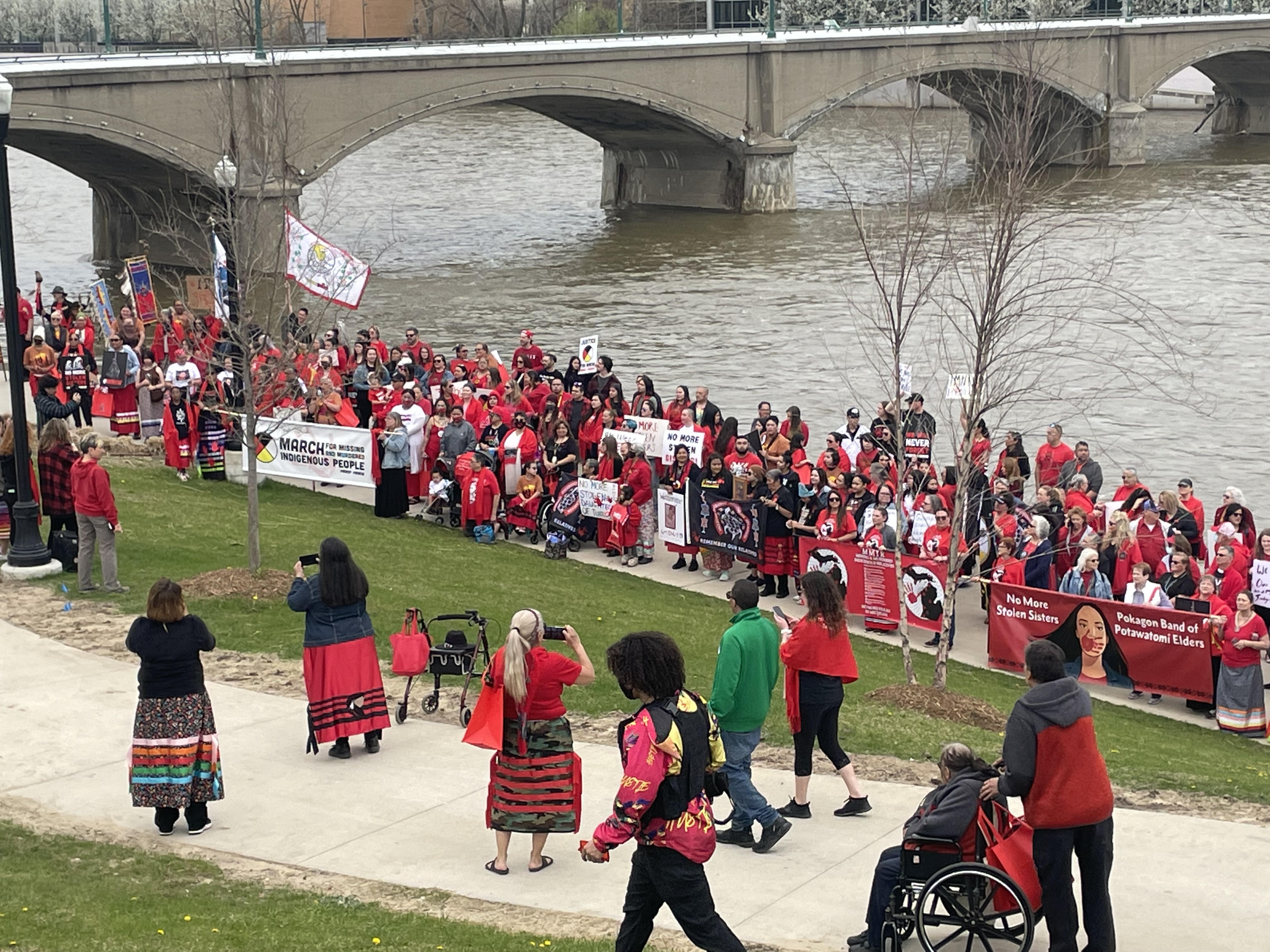 Above the hums of traffic from a nearby freeway as travelers went about their daily business, speakers spoke about the tragic losses encountered in Indian Country of missing and murdered Indigenous persons. The vast majority of people in the crowd wore red in observance of those lost across Indian Country.

“The problem with missing and murdered Indigenous women has been an epidemic since 1492,” Melissa Isaac (Saginaw Chippewa Indian Tribe), who was an invited guest in first lady Jill Biden’s box during the State of the Union, who served as the emcee of the event said.

The event in Grand Rapids was only one events held nationwide on Thursday to bring awareness to the sad reality that Native American people go missing or are murdered at rates that far surpass their White counterparts.

“For far too long, justice for Indigenous communities has been elusive. We must improve our investigations to resolve missing or murdered cases while supporting victims and their families,” President Biden said.

One of the most poignant moments of the day came when the parents of Nagohns-ba Massey, a citzen of the Little Traverse Bay Bands of Odawa Indians, who was stabbed to death in Mt. Pleasant, Mich. in November 2020, spoke. She was only 21 when she was tragically murdered on the Isabella Indian Reservation in Mt. Pleasant.

"She was a MMIW advocate and a water protector. She had her whole life ahead of her," Melissa Pamp, Massey's mother, told the crowd. "When something like this happens, it affects us all, as we all know someone, at least one person, who is has been a victim of MMIW. I would encourage you to use your voice. Seek justice and show up when needed to help."

"Use tribal sovereignty to banish perpertrators from your tribal lands," Pamp said. "I encourage tribal leadership to get involced. I was fortunate enough to have some tribal leadership who were supportive of a life sentence (for the person who was convicted of killing her daughter).

"I am sorry it took all this to get involved, We do everything we can do to stop this so that other families don't have to go through what we did," Miengun Pamp, Massey's stepfather said.

After other speakers, the crowd marched through downtown Grand Rapids to bring awareness of the tragedy of missing and murdered Indigenous persons.