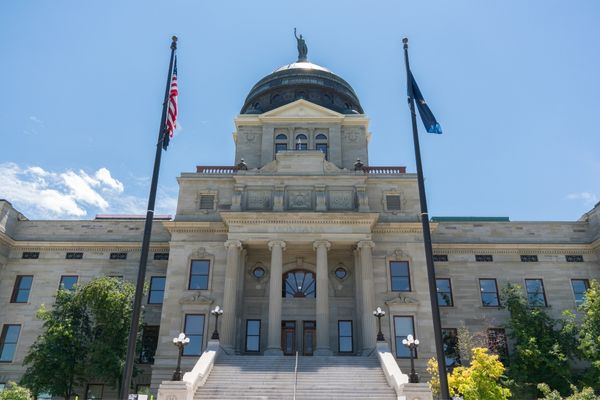 Drew Zinecker, an aide to Rep. Braxton Mitchell, R-Columbia Falls, made the comments during a meeting of the Lewis and Clark County Republican Central Committee.

This story originally appeared in the Montana Free Press and is used with permission.

A legislative aide with aspirations of representing House District 80 in the 2023 Legislature questioned in public remarks Tuesday whether members of tribes living on reservations in Montana should be able to vote in state elections.

“If the reservations want to say they are independent countries … but they want a lot of handouts, why are we counting their ballots?” said Drew Zinecker, who will this session serve as a staffer for Rep. Braxton Mitchell, R-Columbia Falls, during a meeting of the Lewis and Clark County Republican Central Committee.

Mitchell did not respond to a request for comment.

The committee was gathered to advance potential appointees to HD 80, a district including parts of Lewis and Clark and Powell counties that was recently vacated by Rep. Becky Beard, R-Elliston, who herself was appointed this month to represent Senate District 40, a seat made vacant by the retirement of Sen. Terry Gauthier, R-Helena.

Zinecker, one of several candidates who stood for questioning by committee members Tuesday, made the comment to mixed applause during a conversation about election integrity. The committee ultimately voted to send all six candidates — Zinecker, Hailey Oestreicher, Zack Wirth, Valerie Clague, Ken Liston and Nathan Nachtsheim — forward in the process. A committee combined of representatives from both the Lewis and Clark and Powell County GOP central committees will meet next week to advance three of the candidates for consideration by the Lewis and Clark and Powell County commissioners.

In an interview with Montana Free Press after the committee meeting, Zinecker said his perspective on tribal sovereignty and access to the vote is common among conservatives.

“It’s a very consensus opinion among conservatives that if the tribes want to continue to assert their sovereignty, that draws into serious question whether they should be allowed to vote or not,” Zinecker said.

Zinecker served as an aide to Rep. Brad Tschida, R-Missoula, in the 2021 session. He was also the Senate GOP’s communications director in the 2019 session and ran Public Service Commissioner Randy Pinocci’s 2020 campaign, among other political jobs.

While working as communications director for the PSC from 2019 to 2020, Zinecker was a main character in a saga of the commission’s internal dysfunction. An internal probe identified Zinecker as the likely leaker of emails from then-Commissioner Roger Koopman that found their way to Pinocci and right-wing blog Northwest Liberty News.

Koopman took the PSC, Zinecker, the commission’s legal department, office administrator Mandy Hinman and commissioners Pinocci, Bob Lake and Brad Johnson to court in late 2020. The case is still outstanding. Zinecker, in response to a question from a central committee member, called the lawsuit “frivolous and harassing” and said the respondents have all filed motions to dismiss the case.

Zinecker said his comments Tuesday about reservation voting were in regard to state elections, not federal, as “we can only deal with the state.”

Sen. Jason Small, a Republican from Busby and member of the Northern Cheyenne Nation, said Zinecker’s skepticism about tribal voting in state elections is limited to “a very select group” in the Legislature.

“Goddamn, I can’t believe he said that,” Small said. “It’s funny but it’s not funny.”

Zinecker said one major justification for his position is that conservatives in state government want to — but can’t — audit the finances of tribal nations as the Legislative Audit Committee can with state agencies.

“That’s a big problem. They increasingly assert they are sovereign nations. And if they want to continue to operate on a totally different standard or playing field from Montanans, then they need to truly be those independent nations, and that starts with voting,” Zinecker said.

There are 12 federally recognized Native American tribes in the state. Generally, the majority of tribes’ funding comes from the federal government, which does audit tribal finances. However, state dollars go to Montana’s tribes as well, accounting for 8% of tribal revenue between 2003 and 2009, according to the Montana Budget and Policy Center.

Small said tribes in Montana, despite their status as sovereign government entities subject to federal and tribal law, have a “symbiotic relationship” with the state, including numerous revenue sharing agreements and second-order benefits derived from tourism and other economic drivers, he said. Additionally, owners of fee land on reservations — that is, land not held in trust by the federal government — must pay state and local property taxes.

“You can’t pick and choose who votes,” Small said. “Where do you draw that line — ‘Hey, you didn’t pay taxes this year, you can’t vote?’”

Zinecker said he knows of several people who have run for Montana secretary of state, the office that oversees Montana elections, and made “not counting [tribal] votes” a big part of their platform. He didn’t name any such candidates.

“And I’m all for counting their votes,” he said. “I just want them to go ahead and be Montanans. Let Montanans be Montanans. No discrimination.”

It’s under similar logic that a bill Zinecker is preparing at Mitchell’s behest would ban questions about race or origin on state forms aside from drivers licenses, he said.

Rep. Joe Read, R-Ronan, is one of several state lawmakers and political figures — including former Crow Tribe Chairman A.J. Not Afraid — who have endorsed Zinecker’s bid for the HD 80 seat. Read, whose district includes parts of the Flathead Indian Reservation, said Montana citizens, including those on tribal reservations, have a right to vote in Montana elections.

He suggested, though, that Zinecker was merely entertaining a hypothetical based on a conversation the two of them had during the 2021 session related to legislation Read sponsored to allow non-tribal members to hunt on privately held reservation land.

Read said the tribes are not truly sovereign, describing them as “a federally dependent people group.”

“We still represent them as citizens of the state of Montana,” he said. “That was a discussion we had in the back floor — and that was if they were truly a sovereign country, that would negate their ability to vote. Literally, it was only an ‘if.’”

Raised in Arizona, Arren Kimbel-Sannit is no stranger to the issues impacting Western states, having a keen interest in the politics of land, transportation and housing. Prior to moving to Montana, Arren was a statehouse reporter for the Arizona Capitol Times and covered agricultural and trade policy for Politico in Washington, D.C. In Montana, he has carved out a niche in shoe-leather heavy muckraking based on public documents and deep sourcing that keeps elected officials uncomfortable and the public better informed.