Harvard Project: COVID-19 poses a $49.5B threat to tribal economies 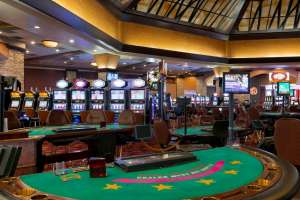 CAMBRIDGE, Mass. — The COVID-19 pandemic could cost Indian Country and its neighboring communities $49.5 billion in wages and benefits, according to research released Monday by the Harvard Project on American Indian Economic Development.

The Harvard Project released its preliminary findings related to the COVID-19 impact in Indian Country in a letter to the U.S. Treasury Secretary Steven Mnuchin, saying the effects of COVID-19 pose an “immediate threat” to 30 years of improvement in economic conditions in Indian Country.

Harvard’s preliminary research shows the closure of all of the tribal casinos and non-gaming tribal business enterprises has dealt a severe blow to tribal communities across Indian Country. In the wake of these closures, tribes are facing massive layoffs, with workers’ losing insurance coverage and tribes dipping into hard‐earned assets, and building up debt.

The 574 federally recognized tribes, as sovereign governmental entities, do not have the capability to have a traditional tax base afforded to other government bodies, such as states, counties, and cities. For the past two decades, tribes have relied on tribal casino revenues and other tribal business enterprises to fund programs, such as health, employment, housing and education, that are critical to their tribal citizenry. The revenues generated by the tribal casinos and non-gaming tribal business enterprises become the lifeblood of tribal economies.

The loss of revenue during the pandemic has not only impacted the tribes, but is being felt directly in neighboring communities.  Tribal tribal gaming and non‐gaming enterprises and tribal governments together support more than 1.1 million jobs, including many non-Natives.

Across Indian Country, more than 900,000 of these jobs are held by non‐Indians, with associated annual wages and benefits worth $40 billion. For California, alone, the figures are 176,000 jobs and more than $8.6 billion in wages.

Even state, local and federal tax revenues are facing severe hits from the impact of the current crisis affecting tribes – to the tune of $9.4 billion per year at the state and local level, and $15.9 billion federally.

In the letter to Sec. Mnuchin, the Harvard Project team writes: “Tying tight federal strings around COVID‐19 federal response funds for tribes will be counterproductive. Beyond that, it is clear that tribes make extremely large economic contributions to their own reservations and the broader states and regions in which they are embedded. The need for COVID‐19 response funds is correspondingly great.”

The preliminary study findings are available at www.hpaied.org.