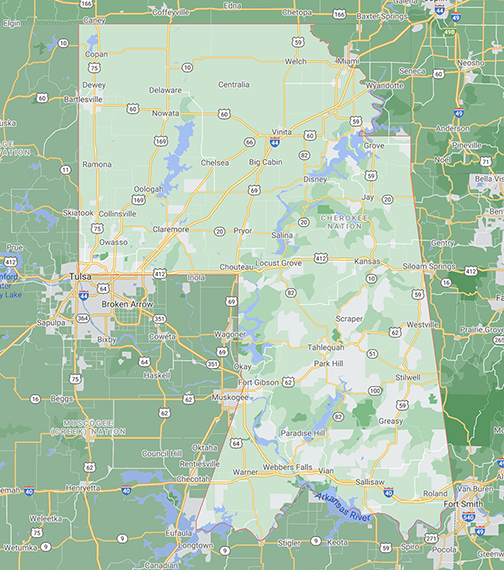 TAHLEQUAH, Okla. — Google Maps took notice of the McGirt v. Oklahoma decision on July 9, in which the U.S. Supreme Court ruled that Congress never “disestablished” the 1866 boundaries of the Muscogee (Creek) Nation, whose territory encompasses three million acres and includes most of the city of Tulsa.

"Google Maps aims to provide the freshest, most accurate map possible. In response to July's Supreme Court decision, we worked to evaluate authoritative data and then used this information to add labels and borders for the Muscogee (Creek) Nation, Cherokee, Chickasaw, Choctaw, and Seminole reservations to Google Maps. These reservations are now viewable and searchable on Google Maps," Raleigh Seamster, program manager for Google Maps said.

Google Maps’ efforts are appreciated by the Cherokee Nation.

The Cherokee Nation reservation boundaries include 7,000 miles in northeastern Oklahoma.

“It is an exciting step forward to be included on the map,” Erb said. “This is a visual reminder that our nation is still here and a contemporary Indigenous nation of the continent.”

CLICK to view the Cherokee Nation reservation on Google Maps.