WASHINGTON — The Democrats will retain control of the House of Representatives for the 117th Congress. The Democrats flipped the House in the 2018 mid-term election. Without all races decided, the Democrats are expected to have 234 seats to the Republicans’ 201.

As was expected the four incumbent American Indian House of Representatives have won re-election. The four current American Indians in the 117th Congress will have Republican Tom Cole (Chickasaw Nation), who represents Oklahoma’s 4th congressional district, after winning his tenth term. Cole took 67.3 percent of the vote to his Democratic challenger Mary Brannon who garnered 29.3 percent of the vote and Libertarian Bob White’s 3.4 percent.

Democrat Sharice Davids (Ho-Chunk Nation) has won her second term to the House of Representatives. In 2018, Davids, along with Rep. Deb Haaland, became the first two American Indian women elected to Congress. With 80 percent of the votes reporting, the race was called by the Associated Press. Davids received 53.7 percent to her GOP challenger’s 43.6 percent and Steve Hohe, who received 2.7 percent on the Libertarian ticket.

Tonight the people of New Mexico have chosen hope over fear, love over hate, community over division, and I am so honored that New Mexican’s have chosen me to serve in our nation’s 117th Congress. 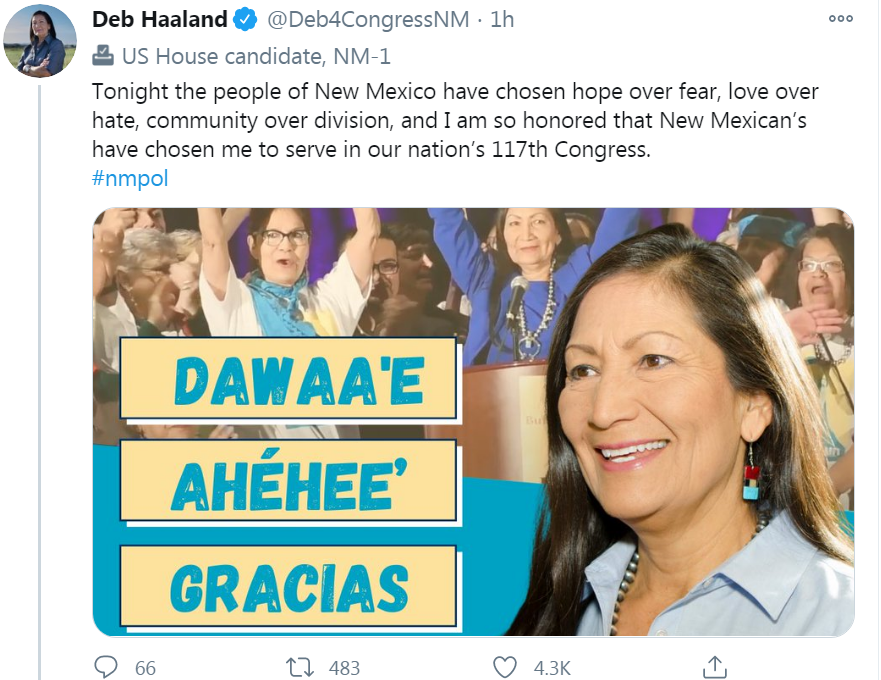