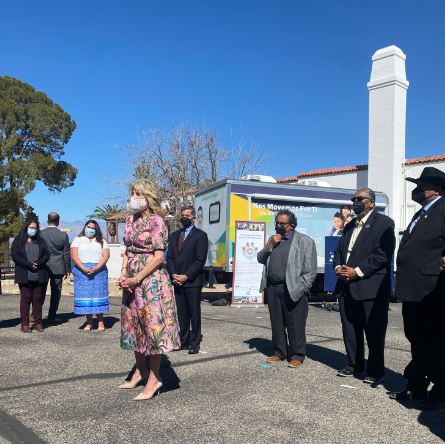 Making her fourth trip to Indian Country since becoming first lady, Dr. Jill Biden on Tuesday visited the Tohono O’odham Nation in southern Arizona. While there she and Health and Human Services (HHS) Secretary Xavier Becerra toured a site operated by the University of Arizona Cancer Center.

They were greeted by Tohono O’Odham Chairman Nate Norris, Jr., who offered a blessing. He asked for guidance for President Joe Biden as he makes critical decisions about the Ukraine War. Norris asked for "a moment of silence for our families, our brothers and sisters, our fellow human beings who are being displaced by that war in Ukraine."

Norris said he appreciated First Lady Biden choosing to come to the Tohono O’odham Nation to view the cancer program.

"It's no question that our efforts to address cancer in our community is a challenge,” Norris said.

Biden and Becerra came to the reservation because the University of Arizona operates the Cancer Moonshot initiative that includes the Arizona American Indian Colorectal Screening Consortium site.

The first lady explained that the Cancer Moonshot initiative had is genesis in the Obama-Biden administration, but said she is happy it has continued.

"Joe and I never stopped because this is personal. It touches us all. So, it's a bipartisan issue. We have to work together,” Biden said.

"This isn't my first visit to the tribal nations. I've been doing this for a couple of years," Biden told the audience that included mostly Tohono O'odham Nation leaders and the University of Arizona Cancer Center staff.

Speaking of the Bidens desire to see cancer ended, the first lady said: "You know, it's really personal for me and Joe. As you know, we lost our son to cancer. And so, one of the things is Joe and I decided to do was find purpose in that law. And it's something that I think our son would want us to do. So, Joe is totally committed to this."

"I've been traveling the last couple months all across America, to look at what's new in cancer in research, to look at rural programs, to look at programs in the cities. And of course, I come here and look at programs for Native Americans. My purpose in being here is to create awareness, which you're saying it's so important. But I also want to restate Joe's commitment to end cancer as we know it,” Biden said.

Secretary Becerra took note that the first lady wanted to come to Indian Country to spread the importance of ending cancer.

"It should be clear to folks it's no accident that Dr. Jill Biden is here, because all of these trips are so organized in advance. I think it's a statement about what Dr. Biden is trying to communicate, but also President Biden, about how we're not going to leave anyone behind,” HHS Secretary Becerra said. 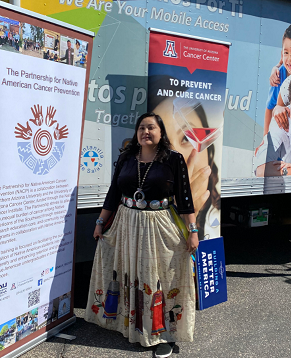 "It was amazing to see the first lady here on International Women's Day," Dr. Monica Yellowhair (Navajo), director of outreach and engagement at the University of Arizona Cancer Center on the Tohono O'odham Nation, said to Native News Online. "It was great to see her with all of the tribal leaders present."

Chairman Norris told the visitors that the Tohono O'odham Nation is 2.8 million acres, with 60 communities, 28 in Mexico.