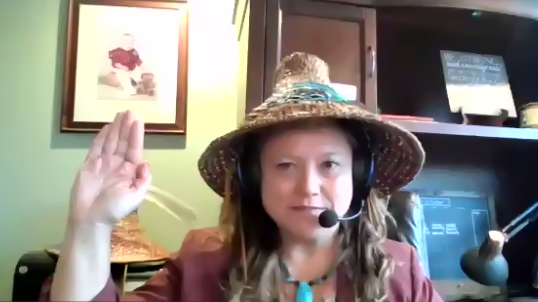 Fawn Sharp was re-elected to serve as president of the National Congress of American Indians (NCAI), the largest national American Indian organization in the United States, on Wednesday, October 13, during the virtual NCAI 78th Annual Convention.

The biennial election was conducted over Zoom.

Sharp ran unopposed and was re-elected by unanimous consent.

During her speech to delegates, Sharp referenced the difficult time Indian Country experienced during the Covid-19 pandemic and how NCAI helped secure unprecedented funds of $30 billion for Indian Country.

She talked about the need for the NCAI to work with tribal nations as the federal investigation of Indian boarding schools is underway.

Even with the difficult days, Sharp says Indian Country should rely on the spirituality found among tribal communities.

After beign sworn in on Thursday, Sharp said she is honored and humbled by the faith entrusted in her by tribal leaders, elders and youth from every section of Indian Country.

“We have been through so much the last few years, and the challenges on the horizon seem even greater, but we are the generation of leaders our ancestors were waiting for. Thanks to the infinite grace and mercy of our Creator, I believe that together we will make the coming years an era of reconciliation, restoration, and healing for Indigenous peoples here and around the world," Sharp said.

Sharp is the current vice president of the Quinault Indian Nation in Taholah, Washington. She previously served as president of her tribe. Other past positions Sharp has held include managing attorney and lead counsel; staff attorney for the Quinault Indian Nation; administrative law judge for the Washington state Department of Revenue – Tax Appeals Division; Quinault Tribal Court Associate Judge; and Counsel for Phillips, Krause & Brown.

A human rights attorney, former judge, and intelligence officer, Sharp has earned degrees from Oxford University, the University of Washington, and Gonzaga University. Sharp has served as both president of the Affiliated Tribes of Northwest Indians and vice president of NCAI.

The winner for the office of vice president was announced early afternoon on Thursday during the fourth general session of the convention.

“I’m deeply grateful for the support, trust, and confidence from Indian Country. I especially thank Lance Gumbs and Juana Majel-Dixon for their candidacies and voices,” Macarro commented. “I’m ready to get to work with NCAI and look forward to serving Indian Country in protecting and advancing our tribal sovereignty and communities.”

For the office of recording secretary, Aaron Payment, chairperson of the Sault Ste. Marie Tribe of Chippewa Indians, ran unopposed and was therefore declared the winner of the office by acclamation. He most recently served as first vice president of NCAI, but was term limited out from that position.

“I pledge to advocate for your tribe as strongly as I fight for my own to uphold the treaty and trust responsibility…I have been a strong voice on advanced appropriations, and mandatory and full funding,” Payment said during his acceptance speech. “I have testified in Congress including the Senate Indian Affairs Committee three of the last four times on behalf of NCAI in advocacy of all tribes everywhere regarding federal appropriations.”

Shannon Holsey, president of the Stockbridge-Munsee Band of Mohican Indians, was elected treasurer for a full-term. She has served as treasurer of the organization after the previous treasurer resigned last year. Holsey ran unopposed.

“This pandemic taught us about resilience and fortitude, but also about adaptation,” Holsey said. “As we move forward, it is critical as the oldest, largest, and most representative American Indian and Alaska Native organization to realign our priorities to meet the enormous needs of our Tribal Nations with inclusion, transparency, and mindfulness as our organization continues to help build a stronger and brighter Indian Country.”

Originally planned for Sacramento, NCAI decided to conduct this year’s convention virtually due to the Covid-19 pandemic.