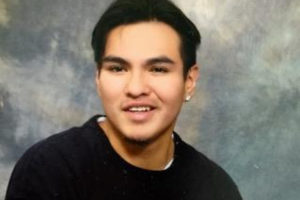 OKLAHOMA CITY, Okla. — The family of Zachary Bear Heels, who was killed by police in Omaha, Nebraska on almost three years ago, is speaking out as three of four officers involved are allowed back on the force.

Bear Heels, a tribal citizen of the Rosebud Sioux Tribe who suffered bi-polar disorder and schizophrenia, was on his way to Oklahoma, but was not allowed back on an interstate bus because of his behavior after another bus passenger complained to the bus driver. Left in Omaha, Bear Heels failed to arrive in Oklahoma to meet his mother who went to the bus stop to pick him up. His mother called the Omaha police and told the dispatcher about her son’s mental health condition. The police told her they could not do anything unless her son was a risk to himself or others.

More than 24 hours later, police were called to Omaha convenience store because Bear Heels was allegedly causing a disturbance. He was apprehended and put in the back of a police cruiser. The police contacted his mother, who spoke with an officer on the scene for almost a half hour. She asked for the police to take her son back to the bus station. Soon thereafter, Bear Heels left the police cruiser and police chased after him.

After reaching him, officers began to drag him by his ponytail. One officer used his Taser gun—firing 12 shots. Bear Heels was taken by ambulance to a local Omaha hospital where he was declared dead.

As a result, four Omaha police officers involved at the violent scene were terminated.

The officers fought their termination. The City of Omaha and Omaha Police Department agreed to arbitration.

Last week, in a joint press release, the City of Omaha Police Department and the Omaha Police Officers’ Association said an arbitration panel had allowed the three officers to get their jobs back.

Because of the panel’s decision, one officer’s termination was upheld. One officer had his termination reduced to a 20-day suspension with a last-chance agreement for a period of one year. Any finding of a violation of the use of force policy within that year will result in his termination. Two other officers were reinstated with full pay even though they violated the department's policy that the panel called minor.

The officers who will return to service will go through refresher training at the Omaha Police Training Academy before they return to regular duties.

“It’s time to move forward. Omaha police officers have a very difficult job and my focus is on keeping my officers safe in the Coronavirus environment while simultaneously protecting the city,” Omaha Police Chief Todd Schmaderer said of the panel’s decision.

“We are deeply disappointed not only in the decision to employ such dangerous individuals on your police force, but also in the use of the pandemic to undermine the death of a loved and special human being,” Bear Heels' family said in a statement. “What we see here is a complete systemic failure in the Omaha Police Department...An innocent life was lost and the Omaha Police Department will hurt more people if it continues to condone an atmosphere where officers can call a special needs person a ‘retard,’ and kill them, and continue on their path of career development.”

“Also, we need accountability from Sgt. Erick Forehead who referred to Zachary as ‘[expletive] retard’ shortly before the officers beat him, dragged him by his hair, and tased him 12 times,” the family statement continues.

An email inquiry to the Omaha Police Department for reaction to the family statement was not returned by press time.