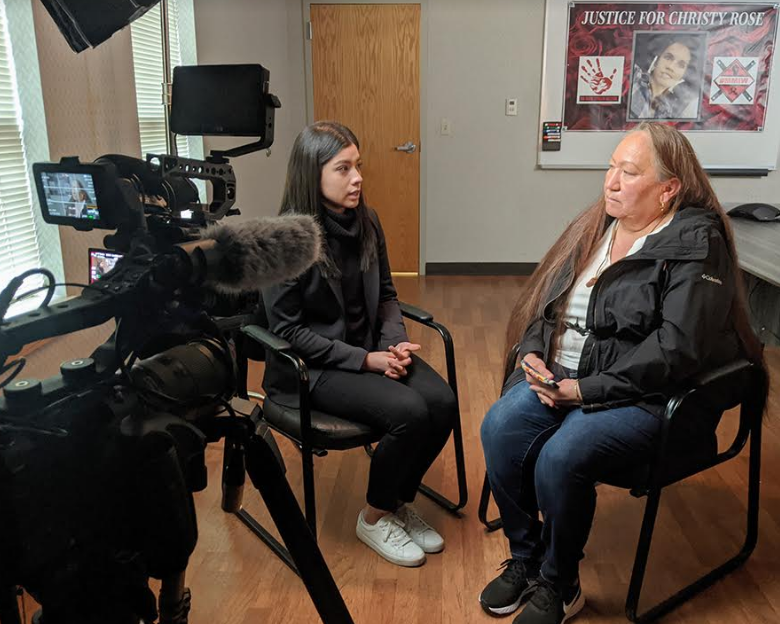 BIGHORN COUNTY, Mont. — President Biden has said of the Murdered and Missing Indigenous Women and Girls (MMIWG) crisis, “What’s happening to Indigenous women on reservations and across the United States is unconscionable and outrageous. And it is devastating that families are conducting their own searches for missing loved ones. It must end.”

President Biden’s statement epitomizes what a new documentary film, Say Her Name, exposes in Bighorn County, Montana. The county, which includes parts of the Crow and Northern Cheyenne reservations, has been called “an epicenter of MMIWG cases” by the Sovereign Bodies Institute.

"Say Her Name" peels back the layers of platitudes and obfuscation that has become standard operating procedure for authorities with jurisdictional responsibility for MMIW/MMIP cases, and instead provides an insight that is both heart wrenching and inspiring, as the families of loved ones demonstrate incredible strength and spirit as they recount their experiences.

Just days after a limited public release to mark the National Day of Awareness for MMIWG, "Say Her Name" has already prompted one network affiliate to predict, “People across the country can expect an eye-opening experience as they watch the film.”

Executively produced by the Coushatta Tribe of Louisiana, "Say Her Name" will be available online, free of charge. Chairman David Sickey said the film was produced to keep the MMIW/MMIP crisis “front and center” for lawmakers, and to bring increased awareness to the 86 percent of Montana’s Missing and Murdered Indigenous People’s (MMIP) cases that remain unsolved and are not getting the national media attention they deserve. Chairman Sickey was at the forefront of efforts to secure the recent executive action on MMIWG in Louisiana.

The Northern Cheyenne Tribe and the Global Indigenous Council also have production credits on "Say Her Name." Northern Cheyenne President Fisher makes one of the most explosive claims in the film, casting severe doubt on the official account of the circumstances surrounding the discovery of Selena Not Afraid’s body.

Hardin, a reservation border town, and the county seat of Bighorn County, has a population of approximately 3,500. Bighorn County has some 50 documented MMIP cases – 27 women and girls and approximately 20 men and boys. Videographer Anthony Stengel’s imagery reflects that stark reality.

“Law enforcement and the Bighorn County Attorney were provided with multiple opportunities to comment and share their perspectives in "Say Her Name."  They declined. The victim’s families don’t have any opportunity to bring their loved ones back. The very least they are owed is to be treated with dignity and have thorough and transparent investigations conducted. Shamefully, that does not appear to be happening,” says Rain.

Most of the perpetrators of these MMIP cases have yet to be apprehended or brought to justice.

An updated, extended cut of the groundbreaking Somebody's Daughter premieres this summer and features a contribution from President Joe Biden who, in Rain’s estimation, “continues to emphasize his commitment to ending the MMIW crisis.” The director says President Biden identifies the long-awaited passage of the Violence Against Women Reauthorization Act (VAWA) as a key step forward.

In 2020 alone, 5,600 Native American women were reported missing, according to the FBI's National Crime Information database. That exceeds US fatalities in the entire Iraq War.

“When that local government asks for federal help, the feds can come in and help with the investigations. That could be happening in Bighorn County, but we’re not seeing that at this point and I’m not quite sure what the reason for that is. There’s a lot of things we can speculate to,” NIWRC’s Lucy Rain Simpson states in the film.

“The situation in Bighorn County cries out for US Attorney General Merrick Garland to launch an investigation,” contends Juliet Hayes, who makes her screen debut presenting "Say Her Name,"  The film follows Hayes, a Coushatta tribal member, as she traverses Bighorn County and the Northern Cheyenne and Crow reservations “to find out why this county with fewer than 14,000 residents and this small reservation border town, Hardin, has been called the epicenter of the MMIWG tragedy.”

Hayes demonstrates great sensitivity when interviewing family members of the victims, and a direct, no nonsense approach when seeking answers from law enforcement.

“The MMIW crisis is gut-wrenching. It’s sickening to me the way the lives of Indigenous women and girls are undervalued as if we don’t matter. My impression of law enforcement while shooting Say Her Name was a complete lack of urgency. There’s a common theme within MMIW and MMIP cases: law enforcement doesn’t care, they give excuses as to why they can’t do their jobs, and they leave families to do their own investigations when their job is supposed to be to ‘serve and protect,’” Hayes continues.

"Say Her Name" indicates that some of the suspected murders are due to the connection of the methamphetamine trade and human trafficking that is present in the region, conducted beneath the dark cape of organized crime. The film explores if it is incompetence or corruption at the heart of regional law enforcement’s silence and failure to deliver justice in so many cases.

“My Administration is fully committed to working with Tribal Nations to address the disproportionately high number of missing or murdered Indigenous people, as well as increasing coordination to investigate and resolve these cases and ensure accountability,” stated President Biden in his Missing and Murdered Indigenous Persons Awareness Day proclamation. Say Her Name highlights how imperative that is.

“Do you think the Bighorn County Sheriff’s Office is involved in a cover-up?” Hayes asks Yolanda Fraser, grandmother of Kaysera Stops Pretty Places, toward the end of the film, which speaks of the necessity to “ensure accountability.”

Native News Online will be hosting a special event to screen and discuss "Say Her Name" on Thursday, May 13 at 7 pm - EDT.

Donate
Free Newsletter
About The Author
Author: Jessica PrahEmail: This email address is being protected from spambots. You need JavaScript enabled to view it.
Breaking News