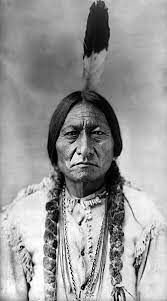 The scientific confirmation gives credence to LaPointe’s lifetime claim he and his sisters are the closest living descendants of Sitting Bull, who is considered one of the greatest American Indian warriors in history because he led more than 1,000 Lakota warriors’ victory over the U.S. troops led by George Armstrong Custer in the Battle of Little Bighorn.

"Many people have tried to question the relationship that I and my sisters have to Sitting Bull," LaPointe said in a statement.

Among families--particularly Native American families--family histories are passed down orally from generation to the next. LaPointe heard of his relationship to Sitting Bull as a child from his mother.

The findings were published in the journal Science Advances.

The analysis was done on a piece of Sitting Bull’s hair. Because the hair was stored at room-temperature for over 100 years in the National Museum of Natural History, much of the DNA had diminished, according to the report.

“Another obstacle was Sitting Bull only had daughters. Because of that factor, researchers couldn’t trace the lock’s lineage using mitochondrial DNA, which is passed down from mother to daughter, or Y-chromosome DNA, which follows the male line,” the report states.

“We had to go nuclear,” University of Cambridge paleogeneticist Eske Willerslev said.

It took the researchers over a decade to develop a technique to search for “autosomal DNA,” which is a non-sex-specific DNA that is inherited from both parents.

When the researchers compared DNA from the hair to that of LaPointe and 14 other Lakota individuals, including two of his sisters, they found more of the recovered genes were exact matches for LaPointe’s than for any of the others. “The result fits beautifully with what’s expected of the great-grandchild of the hair,” Willerslev says.

University of Cambridge geneticists crafted a way to extract DNA from a lock of Sitting Bull's hair. Then they compared the resulting genetic data with LaPointe's. It was a match.

Calling this the first time DNA analysis has ever been used to trace bloodlines between living and historical individuals, the researchers say it may open up a new way for those whose families have oral histories saying they are related to a historic figure but no facts to now prove they are related.

The confirmation also may pave the way for LaPointe to rebury the legendary chief from its current location on the Standing Rock Indian Reservation to a place LaPointe says is more appropriate. LaPointe told The New York Times that the area where Sitting Bull is currently buried has not been well maintained and has been desecrated due to people go there to party.