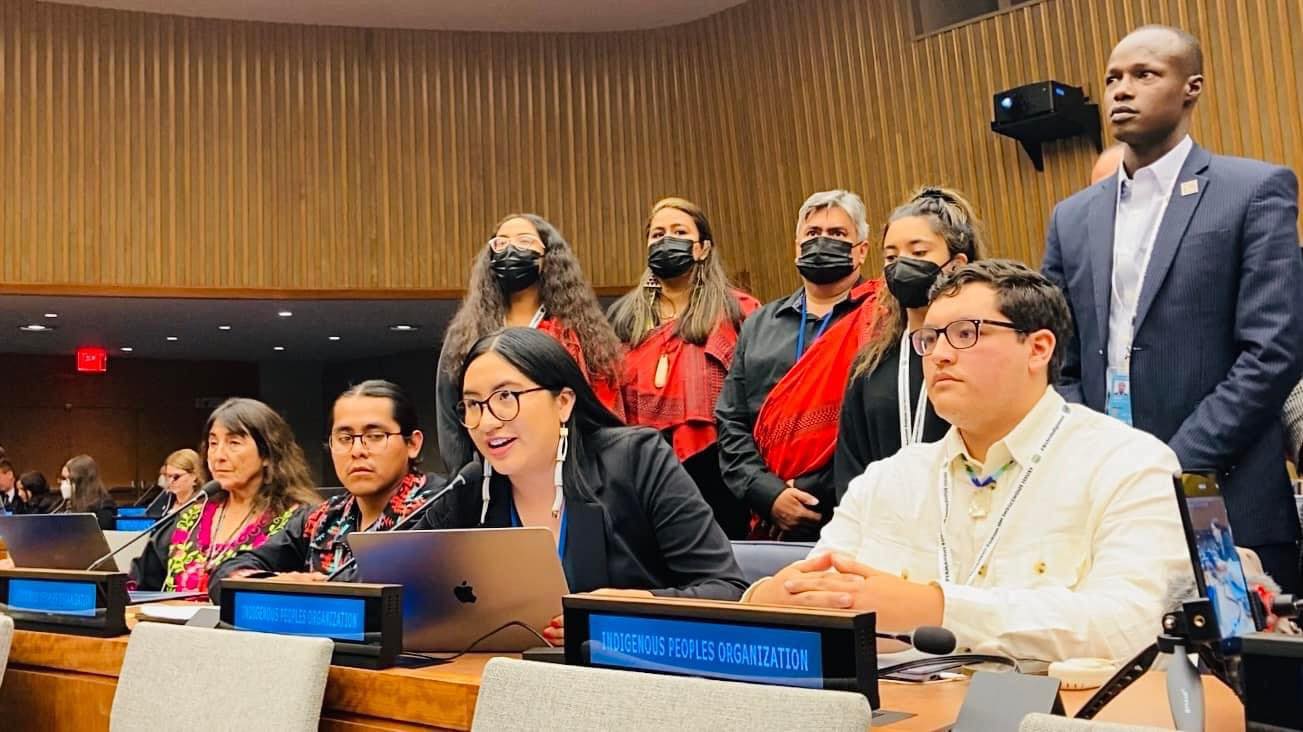 NEW YORK–In a grandeur conference room within the United Nations Headquarters in New York City this afternoon, Indigenous people from every continent (excluding Antarctica) spoke on the importance of preserving and enhancing Native languages. Notably, most of them spoke in the language of their colonizer: English, Spanish, French, and Russian.

“I stand before you today speaking English, because my father used to teach me his Cree dialect,” said Assembly of First Nations National Chief, RoseAnne Archibald. “Fortunately, my mother insisted on teaching me her dialect, of which I'm still not fluent. The intergenerational trauma from these institutions is evident in today's adults and children who don't speak their language fluently.”

Today, The United Nations Permanent Forum on Indigenous Issues (UNPFII) hosted its twenty-first session. The UNPFII is a high- level advisory body that provides expert advice to the U.N.’s Economic and Social Council. The rotating sixteen-member Permanent Forum has met annually since 2002, with the mandate to examine issues impacting Indigenous communities in economic and social development, culture, the environment, education, health, and human rights.

Each year’s forum also centers on a specific theme–this year, it’s “Indigenous peoples, business, autonomy and the human rights principles of due diligence including free, prior and informed consent.”

The United Nation’s lobby was colorful with regalia of the Nations attending—notably lots of reds and oranges. One person in the elevator, after a cluster of us were sent up and down several times by an attendant unsure of which floor to access the General Assembly hall on, aptly remarked how it felt like the first day of school. New faces, a bit of chaos, and anticipation.

After a morning of opening ceremonies and some general housekeeping items, the afternoon session on Indigenous Languages was the first opportunity for participants to speak (if they signed up in advance). For two hours, I listened—sometimes with a translation device in my ear (affixed to each leather-cushioned chair)—to people from Canada and Mexico and New Zealand and the Caribbean; Nepal and Bolivia and Arizona; Finland and Peru; the Cherokee Nation; Guyana, Australia, and the Ukraine’s Crimea. All speak on the significance of Native language preservation and enhancement.

Indigenous languages were described as more than words, as a birthright, as the most direct expression of a culture that carries the eternal ethical values of ancestors and—if lost—directly impacts Indigenous community health.

The U.N. says that almost all of the world’s approximately 6,700 languages are spoken by only 3% of the population, primarily the Indigenous peoples. Estimates say that 95% of the world’s languages will become extinct by the end of this century.

In response to these estimates three years ago, the General Assembly proclaimed 2019 as the International Year of Indigenous Languages, intended to bolster and protect threatened Indigenous languages across the world. The Assembly later adopted a resolution proclaiming the years 2022–2032 as the International Decade of Indigenous Languages, to further underscore attention to the critical loss of indigenous languages and the urgent need to preserve, revitalize, and promote Native at the national and international levels.

The United Nations Educational, Scientific and Cultural Organization (UNESCO) was appointed to serve as the lead agency for the International Decade. The agency created a global action plan with four main outcomes: to integrate Indigenous languages across all  socio-cultural,  economic,  environmental,  legal,  and  political  domains  and  strategic  agendas; recognize Indigenous languages as a means of justice, public service, well-being, and development of societies; and build capacity of Indigenous language users, and develop appropriate language services and tools.

Three speakers received standing ovations for their words. Anpo Jensen (Oglala Lakota), a member of the Global Indigenous Youth Caucus, a group of Native youth from across the United States, was surrounded by caucus when she delivered their address. Jensen expressed the group’s deep gratitude to Native elders who preserved their indigenous languages, and said that the U.N. and individual states must go further to reverse the impacts of colonization to Indigenous languages.

“We start by affirming that the importance of the protection of indigenous languages for the health of the planet is severely underappreciated, especially in the U.S.… against climate change,” she said. “As Indigenous peoples lose their languages, they also begin to lose the cultural practices and traditional knowledge which protected them against violence.”

The Global Indigenous Youth Caucus made two recommendations to the U.N. Permanent Forum: to encourage the expansion of K-12 Indigenous language immersion schools to help Indigenous youth reclaim their languages for all member states, and to recommend that the World Health Organization prioritize indigenous languages as a determinant of personal and planetary health, and invest funds accordingly in their revitalization.

A second standing ovation came later, for a woman in a blue dress–Emine Dzhaparova, the First Deputy Minister for Foreign Affairs of Ukraine, who added perspective to the forum on what it can mean to be an Indigenous person. Dzhaparova is Crimean Tatar, a Turkic ethnic group who are an indigenous people of Crimea, an area in Southern Ukraine  historically colonized by Russia and then illegally annexed in 2014.

“I'm here with you today while my country is being shelled by Russian bombs,”  Dzhaparova said. “Thousands of my compatriots have been killed, raped, and tortured to death for 61 days of the war. For eight years, Indigenous Crimean Tatar people suffered the occupation of their land Crimea. We tried to survive as we did for centuries, despite deportations, ethnic cleansing, oppressions and persecutions and— ironically— behind all these sufferings of my people was and is Russia, and crimes of its regimes and tyrants.”

Crimean Tatar is a severely endangered language, according to the Atlas of the World's Languages in Danger of Disappearing. “I have no doubt that Russia wants to completely eliminate Crimean Tatar language and thus our identity,  because we are the ones who physically destroy the false narratives of Russia that Crimea is a Native Russian land.”

Many speakers on Monday stressed urgency over complacency.

Cherokee Nation Chief Chuck Hoskin Jr.—who attended the Forum just days ahead of a major Supreme Court hearing in Washington D.C. on Wednesday—said the Permanent Forum must set real goals for the end of the ten year period “to create and inspire more speakers.”

“The greatest enemy of the Cherokee language right now is the passage of time and the fragility of human lives,” Hoskin said. “We have no time to lose.”