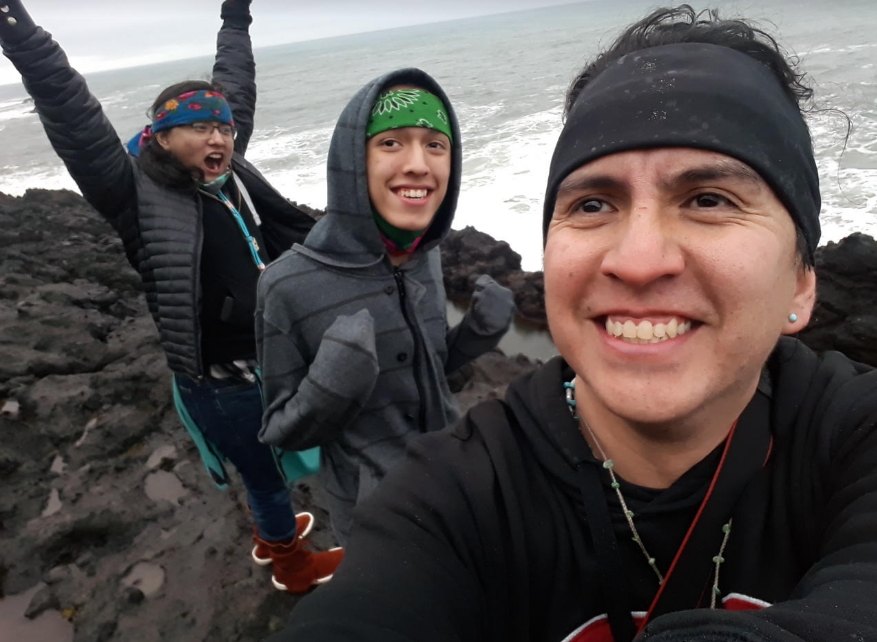 Caroline Kennedy—daughter of former president John F. Kennedy and director of the philanthropic John F. Kennedy Library Foundation— along with her son, Jack Schlossberg, opened a nomination campaign earlier this year for people across the country to nominate those going above and beyond their everyday responsibilities to help their communities fight through the pandemic.

Marks was one of the seven honorees selected among thousands of nominations across the country.

“He’s relentless,” Flagstaff High School principal Tony Cullen said of Marks. Last week, the advisor devised a plan to distribute ‘Congratulations graduate’ yard signs to graduating seniors in remote communities using the principal’s private plane. “He just comes to the desk and says, ‘Okay Tony, here’s what we need to do,’” Cullen said. “We’re going out this weekend to Tuba City. Every child feels important no matter where they're at, because he makes sure he takes care of every one of them.”

Marks, a 43-year-old single father of three children, defines himself as a dad, first. Originally from Tonalea, Ariz.— a small community about 100 miles north of Flagstaff— he moved to Flagstaff for his teenage-age sons to attend high school.

When Marks’ oldest son started school at Flagstaff Highschool five years ago, his father was hired as the school’s first Native American Academic Advisor to help advocate for students—about a quarter of whom identify as Native— as well as other students of color. The school has a dormitory that houses about 160 Native American students from all around the region who otherwise live in remote villages, Marks said.

“When the school closures happened, we had students that had to return home, especially our dorm students,” Marks told Native News Online. “They had to connect to the school virtually, in communities that didn't have electricity, running water, or internet.”

Immediately, Marks devised plans to hand-deliver those student school materials, PPE supplies, food, and even firewood for kids whose homes needed a heating source at night.

“Our principal has a plane,” Marks said. “We flew out to some of those remote areas, just to connect with students to get them homework, (or) to pick up homework.” They tested hotspots, and established community spaces for students to safely learn in villages.

Marks said he derives a lot of his strength and desire to help his community by any means necessary from a Navajo refrain his grandmother used to say, níla, meaning ‘it’s up to you.’

“There's a term in Navajo where we say “níla’, like ‘you go do it,’” he said. “But it was never pointing the finger at any one person. if there's something that needs to be done, you make the decision to do it. And if you do it collectively, then more work gets done. quicker, faster, more effectively.”

Delivering families and students resources they need to succeed falls in line with the principal of níla, as well.

“It gives them hope,” Marks said. “ It gives them the opportunity to say, ‘I can do this, and I'm good at this.’ It changes the trajectory of their lives.”

The advisor has been advocating for a better future for all students well before the pandemic began. Marks has played a pivotal role in enhancing representation, changing cultural curriculum and empowering students since he began at Flagstaff high school, principal Cullen asserted.

Among the list of tangible changes he brought to the school, Marks worked with his colleagues to commission murals depicting Hopi and Navajo people so Native students could see themselves in their school, and advocated for Indigenous-centered curriculum. For example, Flagstaff High School’s biology class now substitutes “animal preparation” in place of animal dissection to respect Native cultures’ teachings that do not allow for the desecration of animals. The result, Marks said, has empowered Native students.

“When they step into our indigenous classroom, they're the first ones to step up and say, ‘I know how to do this,’” he said. “They step into this leadership role, where normally, they might find themselves in the back of the classroom.”

According to principal Cullen, Marks has even impacted the language used around school.

Among the other six recipients honored with the Covid Courage Award are an intensive-care nurse, a grocery store owner, an amazon delivery worker, a fire chief, an Ohio state health department employee, and Michigan Governor Gretchen Whitmer.

An additional courage award, the 2021 Profile in Courage Award from the John F. Kennedy Library Foundation, was awarded to Senator Mitt Romney for his vote to convict President Donald J. Trump in 2020.

All awardees will attend an upcoming virtual ceremony to receive their recognition.

For Marks, the courage award is a nice reminder that there’s more work to be done.