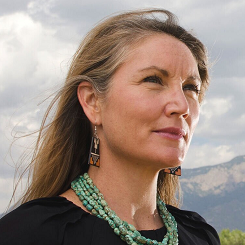 Moores is a Hispanic and a former football star at the University of New Mexico.

Stansbury told her supporters at a hotel in the Old Town section of Albuquerque: “We have to protect our lands and waters and build a more sustainable future …We must protect these lands and lift up our farmers and ranchers. Tackle global climate change — and invest in our clean energy future.”

The 1st Congressional District is Democratic. It turned blue in 2008. Haaland won her reelection in the district last November with 58.2 percent of the vote beating her opponent Michelle Garcia Holmes who received 41.8 percent. Biden carried the district 60 percent to 37 percent in 2020.

Stansbury served as a White House Fellow during the Obama administration on the Council on Environmental Quality as a policy advisor.

She was elected to the New Mexico House of Representatives for the 28th  district in November 2018. She upset incumbent Jimmie Hall, a Repubican, who held the seat for seven terms.

First Lady Jill Biden and Doug Emhoff, the second gentleman, made visits to the district to help Stansbury.