Rep. Deb Haaland Gets Teary-eyed as She Bids Farewell to Her Colleagues in Last Speech on House Floor 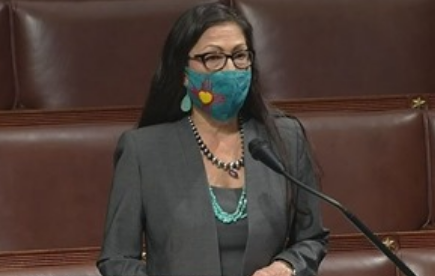 WASHINGTON — Rep. Deb Haaland (D-NM) made her last speech in the House of Representatives on Tuesday, a day after winning confirmation to become the 54th secretary of the Interior. She was confirmed by the U.S. Senate on Monday evening by a 51-40 margin.

Haaland, a tribal citizen of the Pueblo of Laguna, will become the first American Indian to serve as secretary in a presidential cabinet. She began her second term in Congress in January. She and Rep. Sharice Davids (D-KS) became the first two American Indian women to ever serve in Congress after being elected in November 2018.

During her remarks on Tuesday, Haaland recalled struggling to make ends meet as she raised her daughter as a single mother. She became teary-eyed as she bid her farewell to her House colleagues.

Haaland is expected to be sworn as Interior Secretary on Thursday by Vice President Kamala Harris.