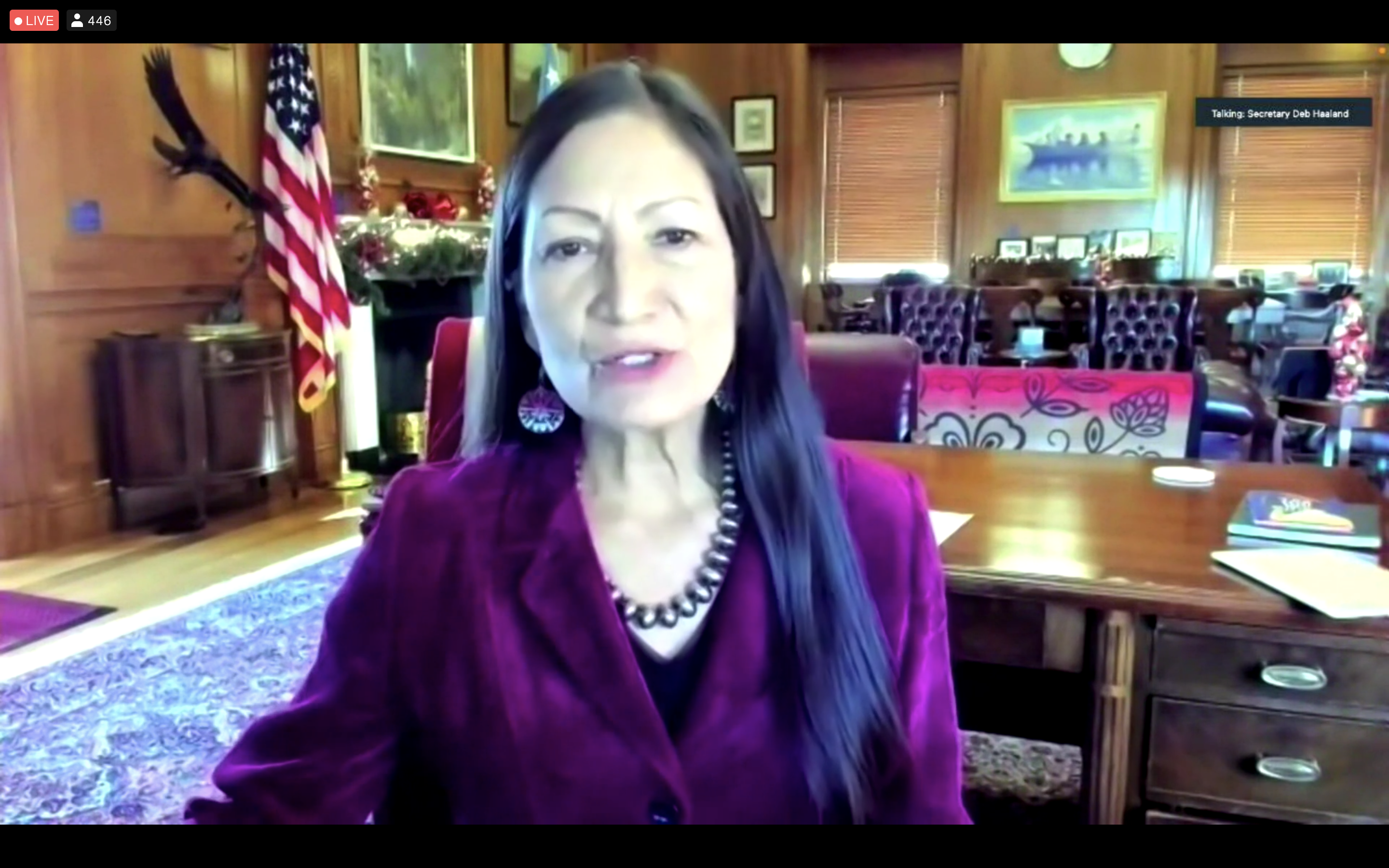 In her address to listeners of the virtual Alaska Federation of Natives Conference on Tuesday, Secretary of the Interior Deb Haaland told listeners that her story is not unlike theirs.

“I embraced my identity as a descendant of boarding school survivors, and someone who has been on the receiving end of federal Indian policy my entire life,” Haaland (Laguna Pueblo) said over Zoom from what appeared to be her office in the Department of the Interior. “It's because our ancestors were always thinking about empowering the future that we are still here and we have a voice in spite of seemingly insurmountable odds.”

Haaland was among a handful of guest speakers in the Alaska Federation of Natives (AFN) two day virtual conference. The theme this year—ANCSA at 50: Empowering the future— celebrates half a century of Alaska Native peoples’ historic settlement act.

The Alaska Native Claims Settlement Act (ANCSA), signed into law by President Richard Nixon in 1971, created more than 200 Native-owned corporations with 44 million acres of land and $1 billion, with a mandate to support Alaska Native shareholders economically, culturally, and socially.

Haaland recognized that the law, while an exmaple of Indigneous peoples’ power to effect change “when they come together as one,” is not without flaw.

For one, ANCSA doesn’t guarantee subsistence rights for Alaska Natives. Instead, those rights are largely regulated by the federal government, something Native leaders have long been fighting.

To right the wrong and create a solution for future generations, Haaland said the Department of Agriculture will begin consulting with tribes and regional corporations in January on Alaska Native subsistence policy.

“This funding will help support Alaska Native villages that are literally being washed away by coastal erosion and experiencing changes to their life ways because of a changing climate,” Haaland said.

For MMIW, Haaland said the Not Invisible Act Commission—meant to inform the Department of best practices in ensuring that indigenous people don’t continue to go missing—will include tribal representatives from Alaskan communities.

The Interior will consult with those same communities “in the months to come,” Haaland said, on policy topics and healing from the federal government’s 100 year policy to assimilate Native children into white society through Indian Boarding Schools.

In closing, the Secretary told Alaskans she looked forward to her next visit.

“I cannot overstate how much I'm looking forward to learning more about your traditions, smelling the air, witnessing the wildlife, eating some delicious salmon, and truly experiencing the incredible place you call home,” she said.

This story has been updated to note Sec. Haaland's office is at the Department of the Interior, not the White House. We regret the error.