WASHINGTON — Democratic Rep. Deb Haaland (Laguna Pueblo), President Joe Biden’s nominee for Interior secretary, sat before a bipartisan group of 20 senators on the Senate Committee on Energy and Natural Resources — both remotely and in person — for two and a half hours of questioning in her confirmation hearing Tuesday morning. The committee recessed, and will resume 10 a.m. Wednesday. CLICK to watch Wednesday, Feb. 24, 2021 hearing at 10:00 a.m. - EST.

If confirmed by the majority of committee members, Haaland will make history as the first Native American to serve in a cabinet position.

“The historic nature of my confirmation is not lost on me, but I will say that it is not about me,” Haaland tweeted an hour after Tuesday’s hearing. “I’m no stranger to the struggles many families across America face today. I’ve lived most of my adult life paycheck to paycheck.”

Haaland grew up in a military family, attending 13 different public schools as a child. Before being elected to Congress, she owned her own salsa business and put herself through college and then law school on food stamps and student loans.

A key focus of the hearing centered around resource extraction. Haaland has taken a public stance against fracking and drilling on public lands, which has led to efforts from some elected officials in Washington, such as Sen. Steve Daines of Montana, to sink the congresswoman’s nomination, citing the impact her policies could have on their states’ economies.

Haaland was introduced by New Mexican Democratic Sen. Martin Heinrich. Heinrich recognized Haaland as the freshman legislator who co-sponsored the most bipartisan bills, thus “(demonstrating) her commitment to working across party lines.”

“Congresswoman Haaland also understands that confronting the climate crisis — not denying it — and transforming our economy will not come without costs,” he said. “That is especially true for fossil fuel workers — including many New Mexicans — who have long powered our economy.” 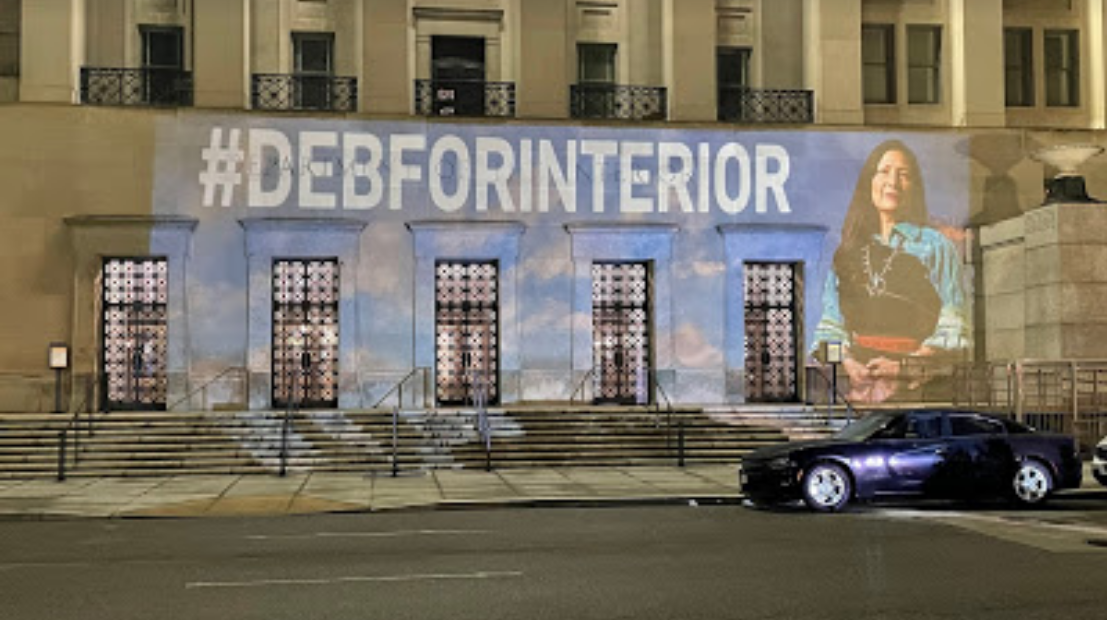 Monday evening in Washington, D.C., IllumiNative put up a projection of Rep. Deb Haaland on the C Street entrance of the Department of the Interior. (Photo courtesy IllumiNative)

Sen. Lisa Murkowski, a Republican representing Alaska, noted Tuesday that Alaska was among those states threatened by executive orders pushed through by President Joe Biden on his first day in office, halting oil drilling in the Arctic National Wildlife Refuge.

“From Alaska's perspective, you’ve got to understand that they're looking at this and saying ‘wait a minute, why is this administration out to get us?’” Murkowski said. “Well I don’t think they’re out to get us, but I do think that there is a definite threat to the resource industry that our state is blessed to be able to host.” She asked Haaland how she’ll approach oil, gas and mineral resource development if confirmed.

Haaland said President Biden doesn’t want to cripple any state, but paused new leases in order to review the programs. “I would be very anxious to work with you, and I will absolutely follow the law if I’m confirmed,” Haaland said. “I think you can bet that I would consult with you regularly. I want to make the best decisions, if I’m confirmed, for the people of your state.”

Sen. Daines, a Republican from Montana, who serves on the Senate Committee on Indian Affairs, said he was concerned with proceeding with Haaland’s nomination because “the track record and the ideology in the past I think will perpetuate more divisiveness and will certainly harm Montana’s economy.”

Sen. Bill Cassidy (R-Louisiana) asked Haaland if her department's decisions “will be guided by a prejudice against fossil fuel or will it be guided by science?”

"I have stated many times that if I am confirmed that the Interior Department's decisions will be guided by science,” Haaland responded.

From North Dakota, Republican Sen. John Hoeven asked Haaland about her position on the Dakota Access Pipeline (DAPL). He referenced her attendance at Standing Rock during the resistance to the long-fought pipeline.

Hoeven then asked Haaland if she would recuse herself from matters related to DAPL, given her prior support of the tribe’s protest against the pipeline. Haaland says she will defer to the advice from Interior attorneys and ethics team members.

Native organizers and allies have banded together to show support for Rep. Haaland’s nomination. IllumiNative and the Native Organizers Alliance hosted a town hall Monday evening leading up to the confirmation hearing, and broadcast a photo of Haaland with a “#DebforInterior” logo on the Department of the Interior building Monday night.

"She did great," said Aaron Payment, First Vice President of the National Congress of American Indian. "She came under severe attack by those who claim to support tribes and Indians. Those who don’t truly support American Indians should not choose to sit on the Senate Committee on Indian Affairs. Other than a paternalistic desire, the committee should be comprised of true allies who would support the nation's first American Indian to a cabinet post."

Crystal Echo Hawk, founder and executive director of IllumiNative, told Native News Online that the mission of the town hall was to get the word out about Haaland’s historic confirmation not only for Indian Country, but to all Americans.

“Listening to this morning’s confirmation hearing, there is a clear concerted effort from the Republican Senators to politicize the position and Deb Haaland’s confirmation,” Echo Hawk said. “As we head towards another round of questioning tomorrow, it is now more important than ever to call your Senators and tell them to support Deb Haaland’s confirmation. We will not let politics stand in the way of confirming the most qualified nominee to lead Interior and the opportunity to usher in the change needed to correct our colonial past and combat our current climate crisis.”