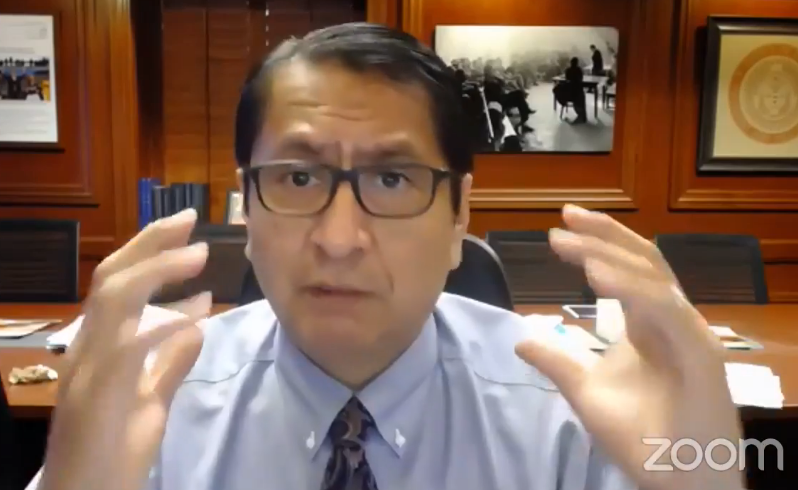 “When contracting COVID-19, American Indians and Alaska Natives are four times more likely to become hospitalized, and two times more likely to die than their non-Hispanic white counterparts,” Edwards said in introduction. According to the Center for Disease Control and Prevention (CDC), American Indian and Alaska Native communities have lost at least 5,307 lives in COVID-19. Despite Natives representing just .4 percent of the U.S. population, they make up 1.2 percent of all U.S. deaths related to the virus.

At its root, National Indian Health Board’s CEO Bohlen said that the reason for such a disproportionate impact is tied to a history of colonialism that has resulted in insufficient funding for Indian Health Services leading to chronic diseases and early deaths among much of Indian country, inequities in education, and racist policies that still exist today.

“There is really nowhere else we would have landed in this pandemic than where we landed, because there are hundreds of years of policy that lead us to this conclusion in a circumstance like this,” Bohlen said.

Native communities had a harder time than most abiding by CDC regulations initially.

“We have disproportionate impacts in terms of poor housing, where multi generations of people are living in homes together. We did not have access to PPP initially (personal protective equipment), and we have many nations that do not have proper water and sanitation so that they can actually participate in all three healthy ways that you prevent this disease from hitting us.”

In the Cherokee Nation, Deputy Principal Chief Bryan Warner said the tribe’s response to the virus has been to protect its most vulnerable citizens.

Since receiving its first shipment of vaccines in December, Warner said they have already vaccinated around 24,000 people, with about 1,000 of those being fluent Cherokee language speakers. Additionally, the nation is planning for a $16 million language center to cultivate a new generation of speakers.

In the Navajo Nation, which has suffered over 1,100 deaths due to COVID, President Jonathan Nez said that the mental health impact as a result of so many deaths will likely be a long term challenge that will be helped, in part, by recent funding from the Biden administration.

“A major disaster declaration was on the desk of the former president for months, but it just took days for President (Biden) to declare a major disaster that brought in mental health resources, as well as we have direct access to the White House now,” Nez said. “And I think, for us, now our next step is really its public health messaging.”

Navajo tribal leadership spread the word about vaccination benefits to tribal citizens by hosting town hall meetings with healthcare professionals on the phone, as well as by leading by example.

“We came in and said, ‘Okay, if we're encouraging people to take the vaccine then we better do it ourselves,” Nez said. “Now it's exploded to where there is so much interest in wanting to take the vaccine. It's not because of us, I think it's really an individual’s choice, not for themselves, but for their family, for their community. That’s how Indigenous people are. It's not about limiting our freedom, it's about the greater good of our communities so i think because of that many of our Navajo citizens have taken the vaccine.”

Dr. Melvina McCabe (Diné) said the World Health Organization declared vaccine hesitancy as one of the top ten threats not only in controlling the current pandemic, but infectious diseases as a whole. Vaccine hesitancy in Indian Country specifically comes from “the history of our tribal nations, the racism, the politics and policies from the United States government, socio-economic factors,” she said.

American Indians and Alaska Natives have mistrust and fear of the federal government as a result of a history of unethical behavior from the United States government—including broken treaties which led to the loss of land, and the forced sterilization of Native women by the Indian Health Service (IHS) in the early 1970s.

Even though the reasoning for hesitancy is similar across Indian Country, McCabe said there’s no magic bullet in addressing solutions.

“One of our women elders said: when you see one tribe, you have seen one tribe, meaning you cannot extrapolate what we have seen in one tribal nation to another tribal nation, and there are differences among communities,” she said.

The advice she had, based on a report published by the Urban Indian Health Institute in January on strengthening vaccine efforts in Indian Country, including some of the strategies mentioned by Nez and Warner.

Strategies included framing the benefits of the vaccine to be for the greater good of the community, disseminating the benefits through trusted tribal leaders and Indian health providers, and to provide Natives with clear and digestible information on vaccine effectiveness, side effects and community benefits.

The survey also found that American Indians and Alaska Natives want those involved in the vaccine to acknowledge the history of the development of mistrust between the federal government and Indian Country.

“That has to be acknowledged,” McCabe said. “I have heard many, many times throughout my career as I start talking about issues like this... scientists that say to me ‘Melvina, just get over it.’ That is just an absolutely ridiculous recommendation.”

Moving forward, McCabe reminded people to remain vigilant with social distancing protocols, since scientists still don’t know if the virus can be transmitted by a vaccinated person to an unvaccinated person, or if the vaccine is effective against new coronavirus strains.

“We need to keep all protection measures going not only wearing masks, but washing hands, physical distancing, avoiding large crowds paying attention that indoor areas... have the ventilation,” she said.