WASHINGTON — The House Subcommittee on Indigenous Peoples of the United States will hear testimony today at 2:00 p.m. on the recent destruction of Native American sacred sites at the southern border in Arizona.

In recent weeks, construction crews contracted by the U.S. Customs and Border Protection agency (CBP) have been blasting through the Roosevelt easement in southern Arizona that includes the Organ Pipe Cactus National Monument, which is part of the traditional homelands of the Tohono O’odham Nation. 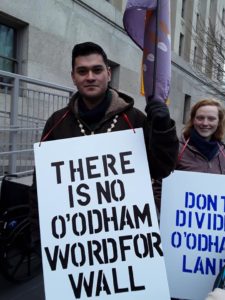 Sign demonstrates "there borders were not our borders" many indigenous people believe.
Photo by Darren Thompson.

The monument is sacred to the Tohono O’odham Nation, and the area has also been designated as a biosphere reserve by the United Nations because it is full of rare plants and animals.

Chairman Norris is set to testify on the federal government’s lack of tribal consultation with the Tohono O’odham Nation regarding the wall being built where there are sacred sites.

O’Loughlin will testify to the vital importance of sacred sites to diverse Native American cultures and religions and how the Department of Homeland Security’s blasting of sites sacred for the Tohono O’odham Nation reflects the current Administration’s attempt to recklessly desecrate sacred land by refusing to consult with Tribes.

Subcommittee for Indigenous Peoples of the United States Hearing

U.S. Department of the Interior