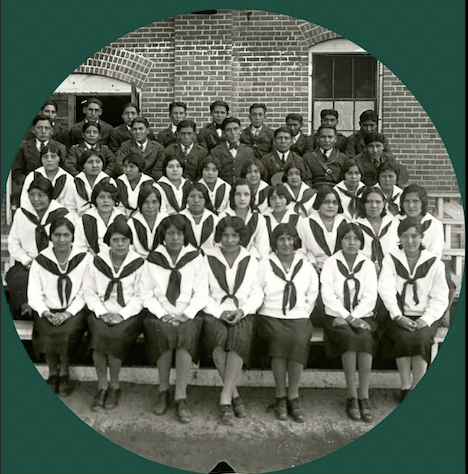 The City of Albuquerque is inviting survivors, descendants, and anyone else connected with the former Albuquerque Indian School to share their experiences in upcoming community conversations, aimed at uncovering untold truths about the school.

The city has been involved in conversations with pueblos and local tribes since June, when national attention brought by the discovery of 215 unmarked graves holding Indigenous youths was discovered in British Columbia.

The discovery prompted the city to take action on it’s own Native burial ground.

An unknown number of children died of sickness and disease at the school, and those from far-away reservations—such as the Zuni Pueblo and Hopi from Arizona, the Mescalero and Ute from Colorado, and the Pima from Arizona—were buried at the cemetery three blocks away.

Under county ownership in the 1960s, the cemetery was transformed into a park, and was transferred to the city a decade later. During the development of an irrigation system at the park in the 1970s, the city uncovered human remains, but it wasn’t for another two decades until officials installed a plaque at the 4-H Park, as it is now called, denoting the Native American gravesites. In 2019, that plaque mysteriously disappeared.

The most sensitive areas of the park have been demarcated and closed to public access,  according to Intergovernmental Tribal Liaison for the city, Terry Sloan.

The city of Albuquerque has been "seeking input and guidance from pueblos, tribes and community stakeholders on how to treat the burial site as a sacred space within a City park, following the disappearance of a plaque that marked the spot where students are thought to be buried," according to the city's press release.

After tribal and stakeholder consultation in December, the city conducted ground penetrating radar in the park and have yet to announce the findings to the public.

Now, they’re hosting four listening sessions in January, “as part of an effort to gather a more complete history to inform the future of the burial site at 4-H Park,” a city press release says.

The City invites the public to share stories about family members, neighbors, teachers, staff and loved ones who were part of the Albuquerque Indian School. The sessions will be held January 11-14.

To attend one of the in-person events, interested participants can register online. People who would like to provide input but are unable to attend a session can email the City of Albuquerque’s Office of Equity and Inclusion at [email protected]