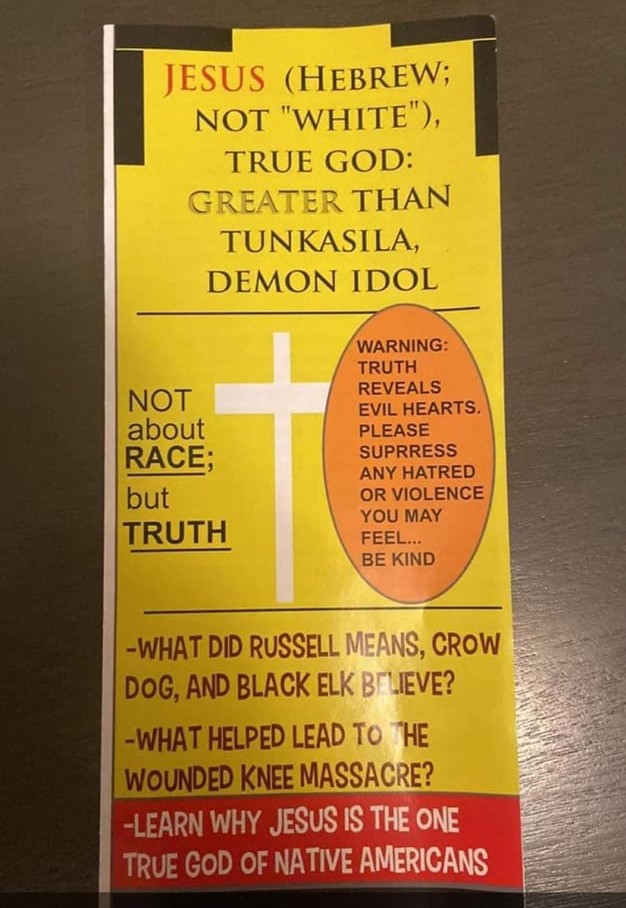 On Friday, July 22, the Oglala Sioux Tribe and its President, Kevin Killer, issued a statement demanding that the Jesus is King Mission leave the Pine Ridge Indian Reservation after pamphlets were distributed that promoted that Jesus, not Tunkasila (a Lakota word for Creator), is the “true god.”

“This week the Jesus is King Missionary was found distributing material that literally demonizes the Lakota Culture and Faith,” said the Oglala Sioux Tribe in a statement. “This is unacceptable and completely disrespectful. It is the view of the President and Council that these ‘pamphlets’ seek to promote Hate instead of Peace. Hate has no place on Oglala land.”

“Learn why Jesus is the one true god of Native Americans.”

“What helped lead to the Wounded Knee Massacre?”

The Jesus is King Mission said on its website of the Wounded Knee Massacre: “What led to the Wounded Knee Massacre as one of the most famous sites in all of North American, Native American history was the Ghost Dance led by Wovoka, a Paiute Native American who claimed to be Jesus in the flesh. He told natives that if they would do the ghost dance, the white men would be exterminated and the dead native relatives would be reunited with the living; also, the buffalo would return.”

Word traveled fast of the materials and their message. “Thus, President Killer and the Council demand that the Missionary Matthew Monfore and the Jesus is King Mission leave the Oglala Lakota Sioux Nation immediately and cease any further hate speech actions,” said the tribe in its statement on Friday.

“The ability to practice the faith of our choosing, voice our concerns, and address our problems is based on one underlying principle—respect. While the President and Council adhere to the Oglala Lakota Constitution's Bill of Rights, the President and Council also have an obligation to ensure that the Colonizing principles of the past are not asserted against the Lakota people again,” said the tribe.

Matthew Monfore, who is listed in the letter issued by the tribe and on the Jesus is King website, published an essay titled, “Do the Black Hills belong to the Lakota Sioux?” In it, he writes “The treaties seem to be tricky business, but when one looks at what has been written; it doesn’t seem like the Natives, who did not understand English, agreed to much, if anything… The Black Hills are not the ‘heart,’ nor are they special in a specific religious way,” Monfore wrote.