EAGLE BUTTE, S.D. — Cheyenne River Sioux Tribe Chairman Harold Frazier declared his Tribe’s solidarity with the Wet’suwet’en Nation, a First Nation in Canada, that is currently fighting the plan to route an oil pipeline through its reserve. 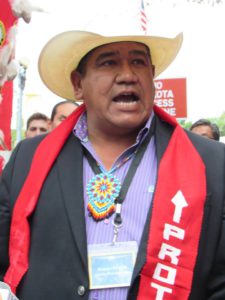 Chairman Frazier made the following statement:

“Across the line known as the US/Canadian border our Wet’suwet’en relatives have been engaging in the same struggle all of us are forced to endure. The invasion of our lands, the robbing of our resources, the raping of our people and to the destruction of our land.

Many of the tribes have stood next to their relatives and shown solidarity in resistance. The Mohawks are among the many who are likely to suffer from paramilitary ‘police’ actions adding human casualties to the damages done to our land. Many of the lands currently under siege were agreed to long ago, yet the greed that preys on this land is worse than any other virus in existence.

“This tragedy has been played out many times in far and remote places. Let us show our neighbors that we see them. We see the injustice and the crime on a peaceful people, who are only guilty of standing up for Unci Maka (Grandmother Earth).

“The Cheyenne River Sioux Tribe stands in solidarity with our relatives in Canada for they have stood with us. If we do not stand up for our planet and relatives, we no longer deserve the right to be a part of this planet or have relatives that care about us.”