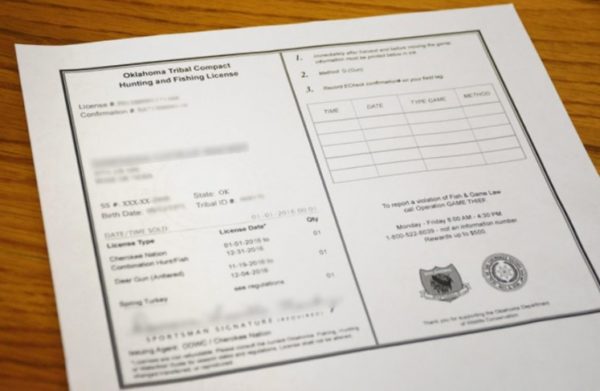 TAHLEQUAH, Okla. — Cherokee Nation citizens residing in Oklahoma will soon be receiving their 2020 hunting and fishing licenses after the tribe’s Hunting and Fishing Compact with the state was extended.

Cherokee Nation Principal Chief Chuck Hoskin Jr. and Oklahoma Gov. Kevin Stitt signed the extension this week. The compact benefits both the tribe and the state, with the Cherokee Nation boosting licensure and opening the door to more than $6.9 million dollars in projected federal funding for the state’s wildlife department. These additional funds are used by the State of Oklahoma for wildlife conservation, aiding fish and wildlife management across the tribal jurisdiction and throughout the state of Oklahoma.

“The Hunting and Fishing Compact extension reaffirms our sovereignty and reminds us of our inherent right as Cherokees to hunt and fish on our lands, much like our ancestors have done throughout history,” said Principal Chief Chuck Hoskin Jr. “Our agreement with the State of Oklahoma provides Cherokee citizens living in Oklahoma an opportunity to hunt and fish not only within our tribal boundaries, but in all of Oklahoma’s 77 counties. This is a win-win for the Cherokee Nation and the State of Oklahoma. I commend the state for its willingness to extend to compact as we work towards further improvements for a possible longer-term agreement in the future.”

Under the compact, Cherokee Nation issues its own hunting and fishing licenses free of charge to  Cherokee citizens residing in Oklahoma. Licenses are recognized by the Oklahoma Department of Wildlife Conservation and provide Cherokee citizens the same priveleges of an Oklahoma hunting and fishing license, including a single deer tag and a single turkey tag per calendar year. Under the compact, the Cherokee Nation will purchase up to 150,000 licenses.

“Over the next year, the Cherokee Nation will continue to collaborate with the State of Oklahoma to negotiate a longer-term Hunting and Fishing Compact that will better address the needs of the Cherokee people,” said Secretary of Natural Resources Chad Harsha. “We look forward to those discussions and appreciate the State of Oklahoma for being a cooperative partner in this effort.”

The compact between the tribe and the state, the first of its kind in the country, originally went into effect on Jan. 1, 2016 and included an expiration date of Dec. 31, 2018. A subsequent one-year extension was later signed. The extension signed this week by Chief Hoskin and Gov. Stitt is set to expire on Dec. 31, 2020.