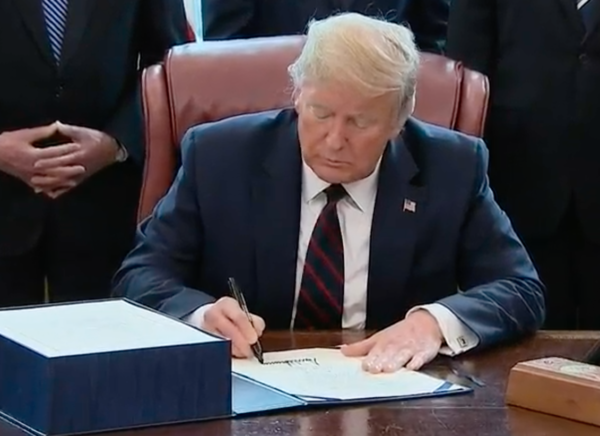 WASHINGTON — The House of Representatives passed and the President signed into law on Friday H.R. 748, a $2.2 trillion stimulus package designed to address the far-reaching impacts of the coronavirus pandemic.

The newly signed Coronavirus Aid, Relief and Economic Security (CARES) Act includes more than $10 billion in set-asides for tribal nations, including more than $1 billion earmarked for the Indian Health Service. The new law also provides $8 billion for tribal nations to use for expenditures incurred due to the COVID-19 public health emergency.

Also included is $453 million for the Bureau of Indian Affairs to fund the deployment of law enforcement and emergency personnel to critical areas, aid tribal governments, extend Bureau of Indian Education teacher and workforce salary needs and send additional medical supplies and equipment to the Territories and Freely Associated States, according to Secretary of the Interior David Bernhardt.

In addition to targeted aid for American Indians and Alaska Natives, there are billions of dollars in other relief funding available to tribes, tribal citizens and Native-owned businesses through federal agencies including the Treasury, Centers for Disease Control and the U.S. Small Business Association.

A centerpiece of the package is direct financial assistance for individuals, with amounts based on income. Individuals who earned $75,000 or less in adjusted gross income on their most recently filed tax return will receive direct payments of $1,200, with married couples earning up to $150,000 eligible for $2,400, plus an additional $500 per child. Smaller payments will be available to those earning less than $99,000 (single) or $198,000 (couples without children).

“This legislation is not only a monumental achievement for Indian Country, it is a landmark affirmation of tribal governmental parity and the federal government’s trust and treaty obligations to tribal nations,” Kevin J. Allis, chief executive of the National Congress of American Indians, said in a statement. “Indian Country achieved this victory through the around-the-clock efforts of tribal leaders and advocates across the nation working as one to ensure that the needs of tribal governments and communities are addressed in the weeks and months to come. Unity is our greatest asset.”

Over the past several weeks, NCAI, National Indian Health Board (NIHB), National Center for Urban Indian Health (NCUIH), National Indian Education Association (NIEA) and other national organizations have worked collaboratively and furiously to develop Indian Country's top policy priorities for addressing COVID-19 and pushed Congress to include them in the stimulus package. The final legislation features strong provisions in support of these priorities and will help tribal communities across Indian Country as they respond to the pandemic, according to an NCAI statement.

Funding for healthcare was an important part of the effort to make sure Indian Country priorities were included, according to Francys Crevier, executive director of NCUIH.

“As Indian Country is always the first to get cut and last to get funding, we are encouraged by the leadership of Congress in working to include Indian Country in its priorities throughout the response to the coronavirus pandemic,” Crevier said in a statement. “As COVID-19 cases continue to rise in Indian Country, Tribes and urban Indians have been on the front lines of this public health crisis yet they have been operating with woefully inadequate funding and resources. Our top priority is to get this money to Tribes and our Native communities who need it most to mitigate this pandemic.”

As they work to get money deployed, tribal advocates and policymakers are already looking toward another round of funding to combat the coronavirus.

Sen. Tom Udall (D-N.M.) called for the next response package to include a tribal-specific title and pushed Congress and the Trump administration to make sure Indian Country has equal access for federal coronavirus resources.

“Just as we had a strategic approach to get stuff in the bill — and in future bills — we’re going to have a very focused and comprehensive strategic approach that now focuses on the [Trump] administration, to make sure they do what they’ve been asked to do,” NCAI CEO Allis said. “The work is not done for us.”