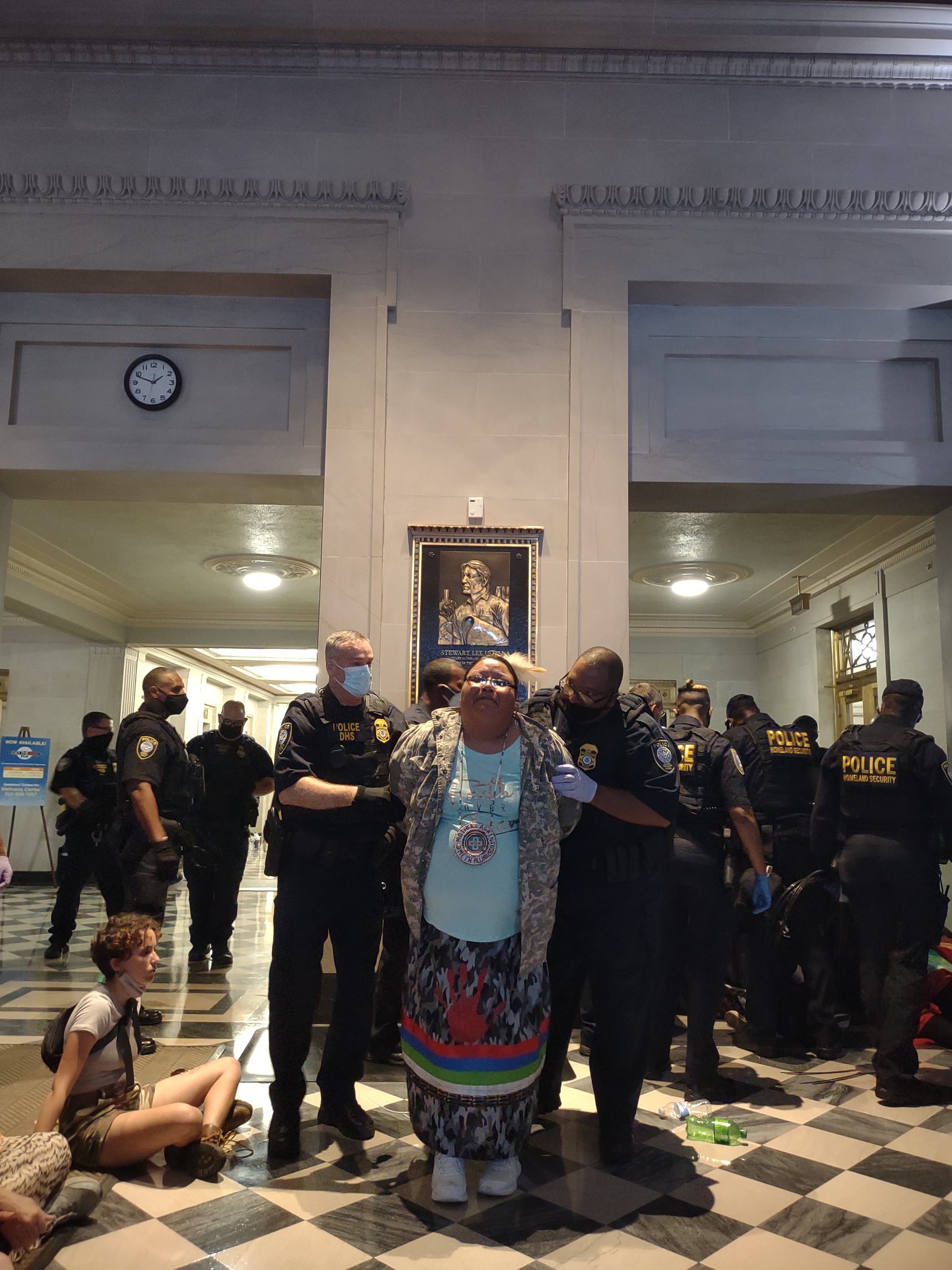 They brought a message to the administration.

“Politicians do not take care of us. Presidents will break their promises, but Mother Earth has always given us what we need to thrive,” the group said in a statement. “We will not back down until our natural balance is restored.” Their demands include abolishing the Bureau of Indian Affairs and restoring treaties with Indian Tribes. A comprehensive list of demands is printed below and is also available online.

Native News Online reported that the People vs. Fossil Fuels event started on Monday, Indigenous Peoples Day, where more than 130 people were arrested for protesting outside the White House and “Expect Us” was spray-painted on the statue of Andrew Jackson.

On Tuesday, two people climbed the flagpole at the Army Corps of Engineers North Atlantic Division Office in Washington, D.C., and replaced the American flag with a flag that read: “Consultation is not Consent.”

“You can’t tackle the climate crisis when you’re tackling pipeline resisters at your front door,” tweeted Resist Line 3 on Thursday. At 1:21 pm that same day, Resist Line 3 tweeted that all entrances to the Department of Interior were blocked to prevent police from removing Indigenous leaders occupying the building.

At 1:02 pm, Jennifer Falcon of the Indigenous Environmental Network tweeted that police started arresting people inside the BIA building and said, “police are threatening press and taking equipment; announcing they will arrest Indigenous press.”

At 1:31 pm, other activists climbed the walls of the United States Chamber of Commerce and hung two signs that read: “Welcome to the Chamber of Climate Chaos,” and “Your Business Costs the Earth”.

Organizers cited that yesterday’s action was the first time the Department of Interior Building was occupied since 1972, when the American Indian Movement took over the building from November 3 to November 9, 1972, upon completion  of a cross-country journey of the Trail of Broken Treaties. A group of around 500 people took over the Interior building in Washington, D.C. that November 3rd, and after a week, the protesters left, some taking documents with them, having caused an estimated $700,000 in damages. It is unlikely anyone was arrested as a result of this action, and the federal government ended up giving the activists money so they could afford to leave. President Nixon had wanted to make sure Natives were kept safe.

Fifty-five people who were occupying the BIA building were arrested and taken away to police stations on Thursday.

“Early this afternoon, a group of protestors entered the Stewart Lee Udall Main Interior Building,” said Department of Interior’s Communications Director Melissa Schwartz to Native News Online of Thursday’s action. “Federal Protective Service personnel responded to the area to mitigate the situation. Multiple injuries were sustained by security personnel, and one officer has been transported to a nearby hospital. Medics representing both the Department and the protesters were present.”

“Secretary Haaland is traveling and not in Washington, D.C.,” said Schwartz.

Nearly 400 people have been arrested at the White House since Monday.

The posted list of the activists' demands for the President of the United States are: