Biden on Signing National Monument Proclamations: “This May Be the Easiest Thing I’ve Done as President" 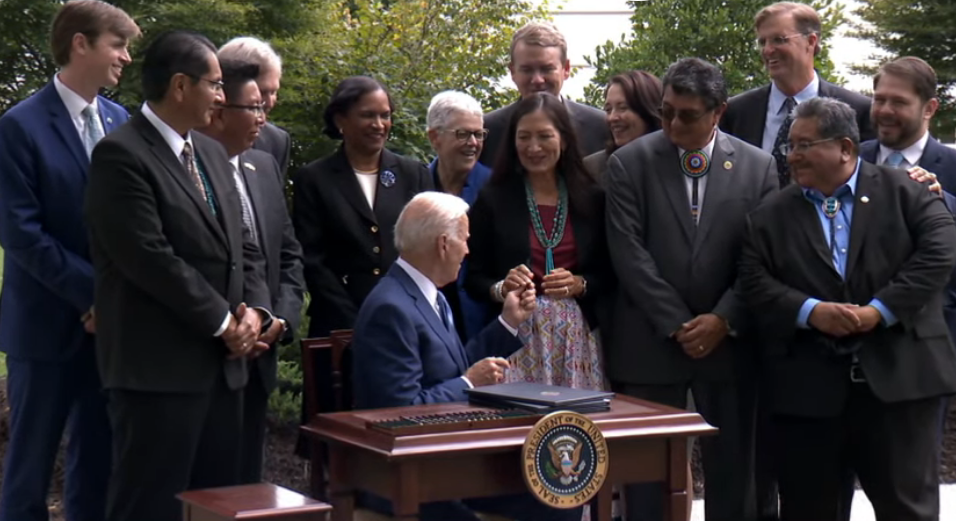 President Joe Biden, saying “this may be the easiest thing I’ve ever done so far as President," signed proclamations that restore the original boundaries of Bears Ears, Grand Staircase-Escalante and Northeast Canyons, and Seamounts National Monuments in a White House Rose Garden ceremony on Friday.

Dressed in tribal regalia, Interior Secretary Deb Haaland (Laguna Pueblo) introduced the president of the United States, who thanked her for all of her hard work related to the monuments.

After Haaland introduced the president, he thanked her for work related to coming up with recommendations on whether to restore the national monuments.

“Madam Secretary, Deb, you have done an incredible job in a short period of time,” Biden said to Haaland. He also thanked tribal nation leaders for their hard work.

“This is the first national monument in the country to be established at the request of federally recognized Tribes, and a place of healing -- as was spoken by the Secretary; a place of reverence; a sacred homeland to hundreds of generations of Native Peoples,” President Biden said.

In signing the proclamations, President Biden fulfilled promises he made during the 2020 presidential election to overturn the actions taken by then-President Donald Trump that drastically reduced the size of the national monuments. In the case of Bears Ears, Trump reduced the size by 85 percent.

“Bears Ears is a living landscape. When I’ve been there, I felt the warmth and joy of ancestors who cared for their special place since time immemorial. It’s a place where you can stand in the doorway of a home where a family who lived thousands of years ago left behind a legacy of love and conservation for a place that sustained them for countless generations,” Haaland said before she introduced the president.

Haaland visited Bears Ears in April for fact-finding purposes before making her recommendations to the president. While there she met with tribal, state and local leaders who had opposing views.

“We’re excited that action will be taken by the Biden-Harris administration, with the guidance of Secretary Haaland and the coalition of tribes and other stakeholders. The protection of Bears Ears has been fought for by many tribal nations for many years. We fully support the expansion of Bears Ears. It’s a win for our people, our ancestors, and generations to come,” Nez said to Native News Online on Thursday night.

“Scientists estimate that the protection and restoration of national lands and waters can provide nearly 40 percent of the solutions to climate change. That’s why I’m signing these proclamations today as an additional reason,” Biden said at the conclusion of his remarks.