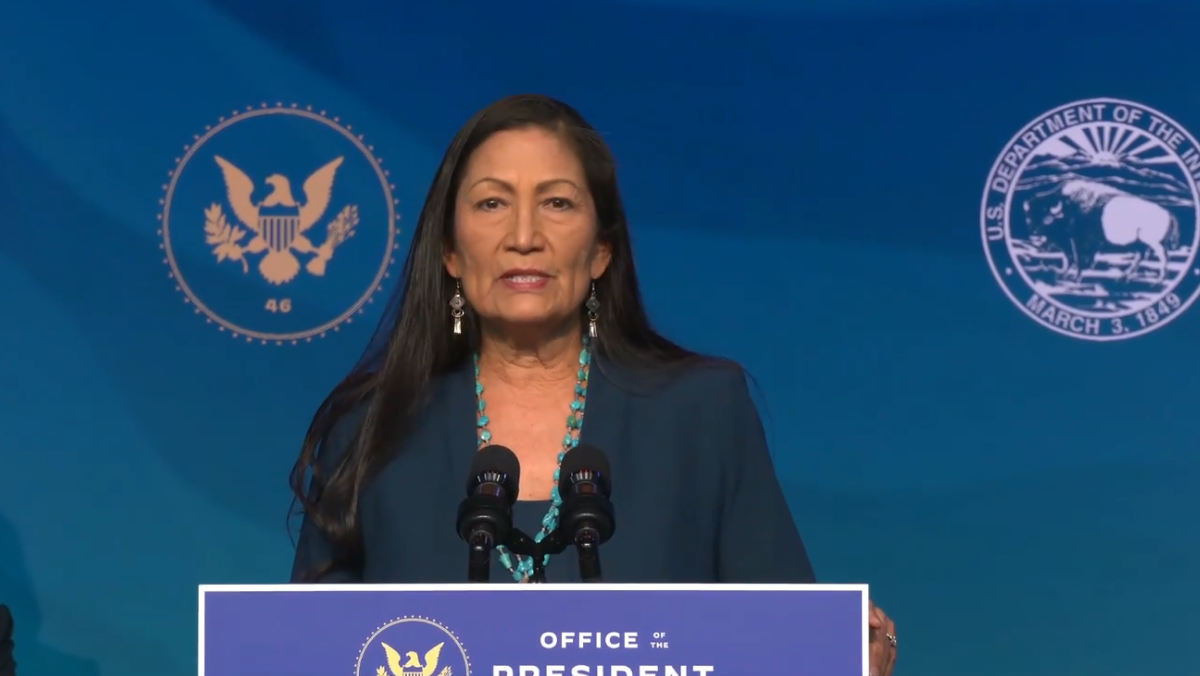 WILMINGTON, Del. — President-elect Joe Biden on Saturday afternoon introduced his administration’s environment team to the nation. Included on the environment team is Rep. Deb Haaland (D-NM), the first American Indian ever nominated to be in a presidential cabinet.

Haaland is a tribal citizen of the Pueblo of Laguna, located in New Mexico. She represents the New Mexico's first congressional district that covers a major portion of the Albuquerque, N.M.

"As the first Native American cabinet secretary, Rep. Haaland will be a true steward," Biden said.

Haaland currently serves as vice chair of the House Committee on Natural Resources. Her experience there will enable her to be ready on day one to protect our environment and fight for a clean energy future.

"I am proud to stand here on the ancestral grounds of the Lenape Tribal Nation. The President-elect and Vice President-elect are committed to a diverse cabinet and I am honored and humbled to accept their nomination for secretary of the Interior," Haaland said.

Rep. Haaland held back a tear for a second as she talked about the hurdles she faced of once being homeless and living on food stamps as a single mom.

In her remarks, Haaland referenced her grandparents who were taken from their family and put in boarding schools in an effort to destroy their traditions and identity.

"This moment is profound when we consider the fact that one former secretary of the Interior once proclaimed his goal, to quote 'to civilize or exterminate us.' I am a living testament of the failure of that horrific ideology," Haaland said. "I also stand on the shoulder of my ancestors and all the people who sacrificed so that I can be here."

As he introduced Haaland, Biden said:

"For Secretary of the Interior, I nominate Congresswoman Deb Haaland.

She’s of the Pueblo people. A 35th-generation New Mexican.

She’s from a military family. Her mom, also Pueblo, served in the United States Navy. Her dad, Norwegian American, a Marine now buried in Arlington.

A single mom, she raised her child while running a small business.

When times were tough, they relied on food stamps.

Congresswoman Haaland graduated from law school and got involved in politics.

Two years ago, she became one of the first Native American women to serve in Congress.

She serves on the Armed Services Committee, and Committee on Natural Resources, and Chairs the Subcommittee on National Parks, Forests, and Public Lands, where she’s earned the respect
of a broad coalition of people — from tribal leaders to environmental groups to labor.

As the first Native American Cabinet Secretary in the history of the United States of America, she will be a true steward of our national parks, natural resources, and all of our lands.

The federal government has long broken promises to Native American tribes who have been on this land since time immemorial.

With her appointment, Congresswoman Haaland will help me strengthen the nation-to-nation relationship, and I am honored she accepted this critical role."